We're officially kicking off the #LCFMA20 season with MA Costume Design for Performance. For this year's final show, which took place at Sadler's Wells Theatre in London, the students proved the power of storytelling and performance portraying a wide range of themes through costumes: from climate crisis to sexuality in religion, traditional cultures, mental wellbeing, identity and even the adventures of a living sofa! To learn more about the messages and inspirations behind their costumes, here's a recap of this year's MA Costume final show — Part One.

"Couch began with my curiosity in home textiles and upholstery, as an attempt to answer the question: why are all couches so ugly? We've all had couches, we have all spent a lot of time on them. They have seen the worst and the best of us, they are a grandmother or a close friend."

"We keep them near, yet share them openly. We’ve had them for years, they’re stained, and covered in an out of date tapestry fabric, yet they’re our favourite objects in the house. Can we be judged for their appearance in the same way we are judged for our own?" 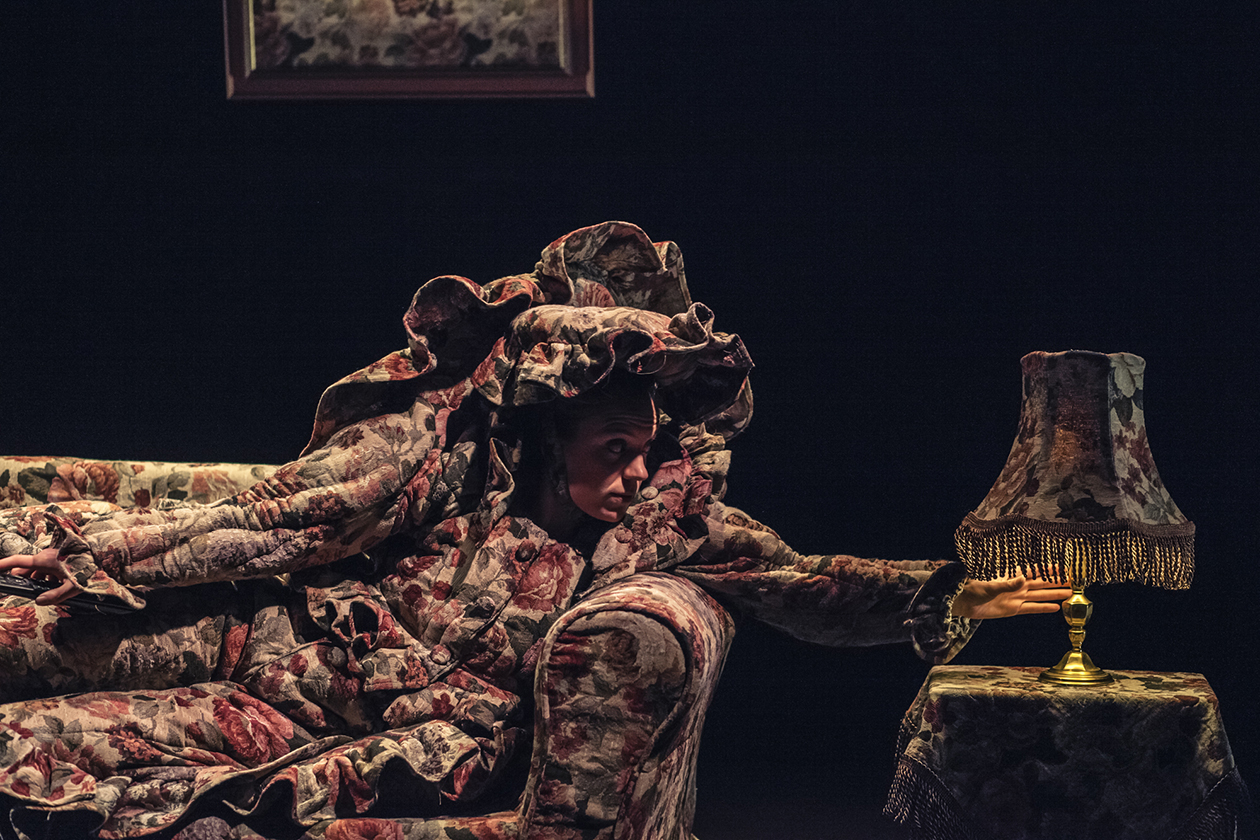 Lucy Holzhauer-Conti - The Children of an Oscuro Pasado

"Inspired by Xóchitl Morales’ poem Latino-Americanos: The Children Of An Oscuro Pasado, this piece explores the experience of growing up in a multicultural household and the challenges of merging a Latin-American heritage with Western ideals and behaviours."

"This costume portrays the often inadvertent suppression of a vibrant culture that has inspired music, costume and arts in the Western world. Whilst relating specifically to the experience of Latin-Americans in this case, the sentiment can be echoed in many cultures whose people
have repressed their native habits in favour of idealised Western values." "This performance is based on the experience of an art student studying abroad, where the transportation and storage of the artefacts she produces can become a problem. Inspired by Hussein Chalayan’s mobile home fashion collection, the suitcase in this performance represents the personal history of an artist."

"As a traveler, she is exposed to different cultures and people, and acquires the ability to adapt and include those experiences in the creation of new work. The content of the suitcase hosts the artwork as a personal mobile archive of creative discovery and personal reinvention." 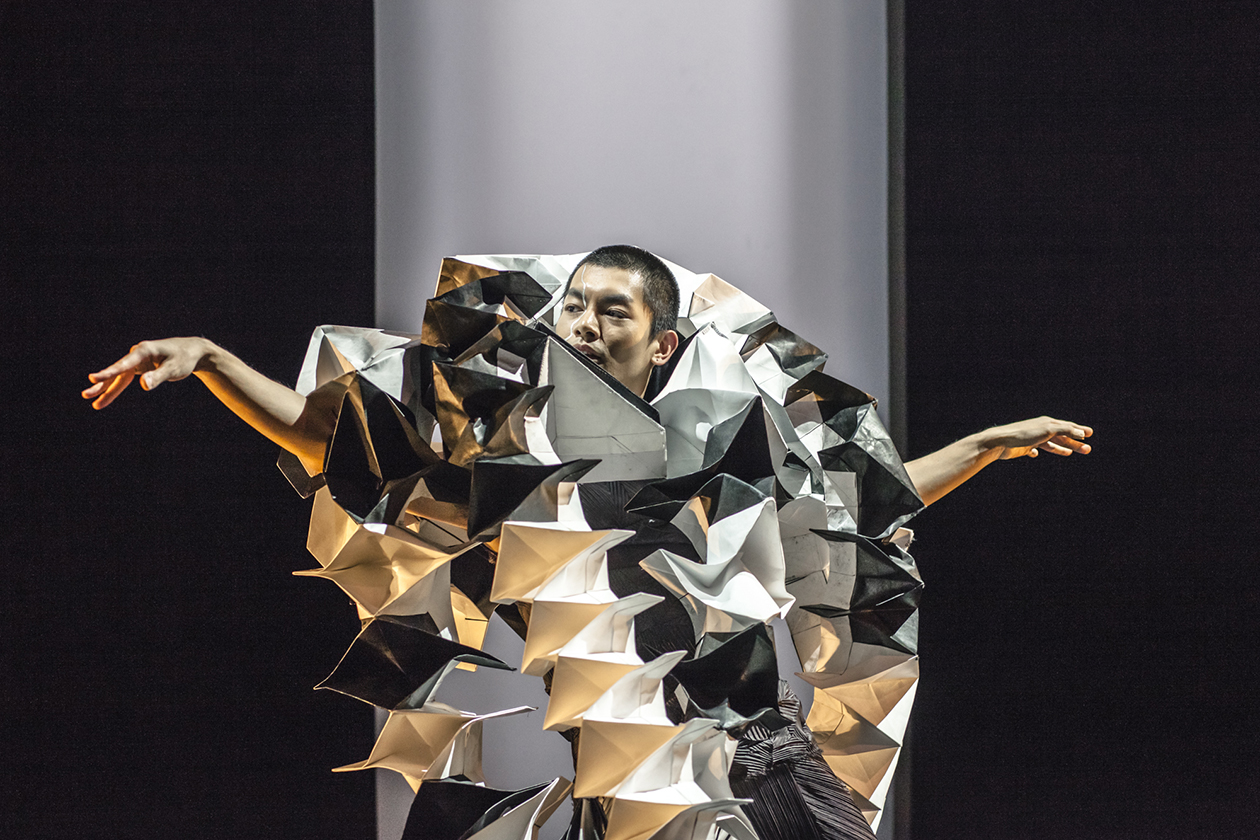 "This performance aims to draw attention to the subject of climate change and the way it affects certain remote regions of our planet, like the Kiribati Islands within the Pacific, which are under direct threat of being destroyed by the rising water levels of the oceans and pollution coming from the western part of the world."

"The performance focuses on the people who have done little to cause climate change and are yet the ones most affected by it. It aims to give
a voice to the voiceless, like the people of Kiribati Islands, who are doing everything in their power to be heard." 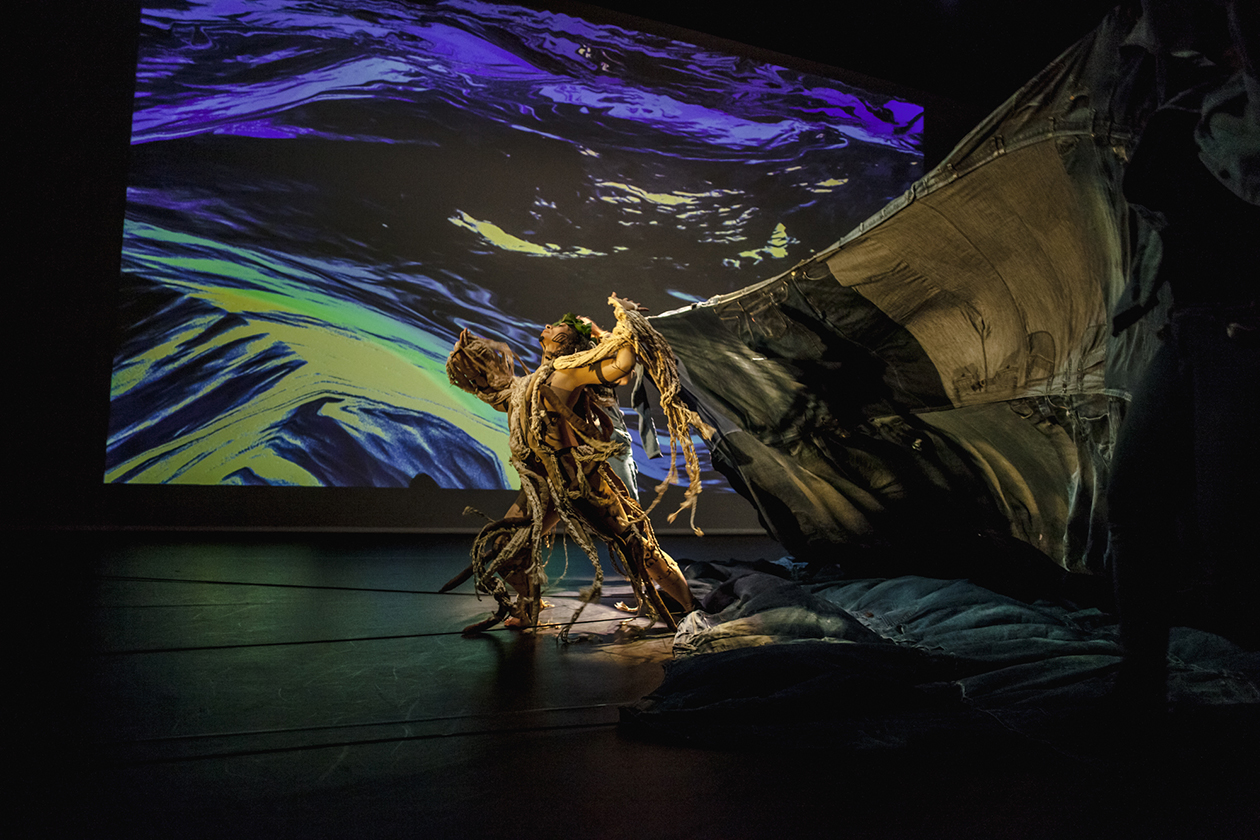 Xinyu Jiang - My Surrounding Self

"My Surrounding Self is inspired by the male protagonist in the French movie La Belle Captive, Michel Foucault’s The History of Madness and Japanese avant-garde artist Yayoi Kusama’s artworks, exploring themes around depersonalisation disorder."

"The performance aims to explore our experiences of increasing social pressured mental illness because of social media. It's closely related to the fast-paced, stressful modern society, explore these topics in a compassionate way with humour, absurdity and optical illusion." 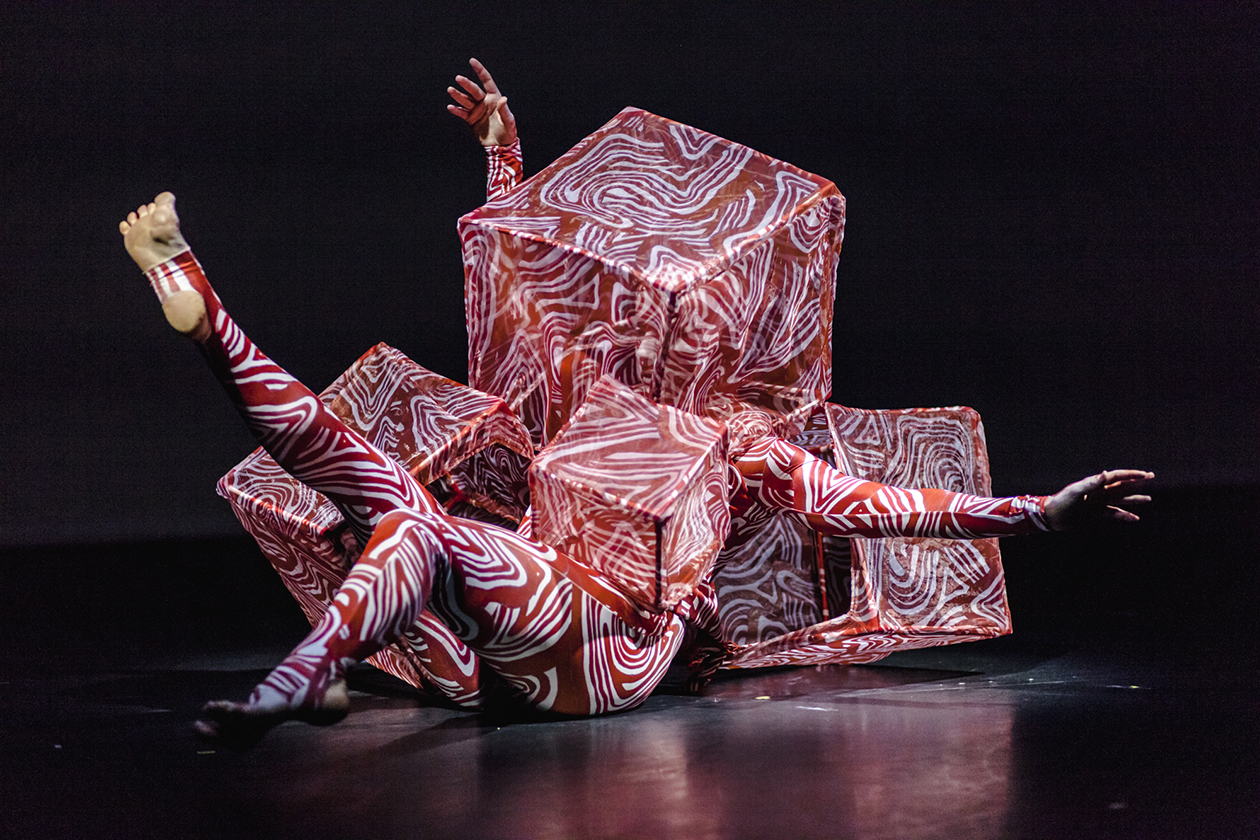 "According to Hindu mythology, Goddess Sati burnt herself until her body exploded into 51 pieces, as a form of protest against her father's plans to arrange a marriage without love for her."

"In this performance, her rebirth, her rising from the ashes, is explored as a call to rebellion for today's women to provide them with strength, power, courage and compassion. The project aims to give a strong message to all societies and young girls, by using the traditional Indian classical Bharathanatyam dance to convey the message She can be anything she wants to be." 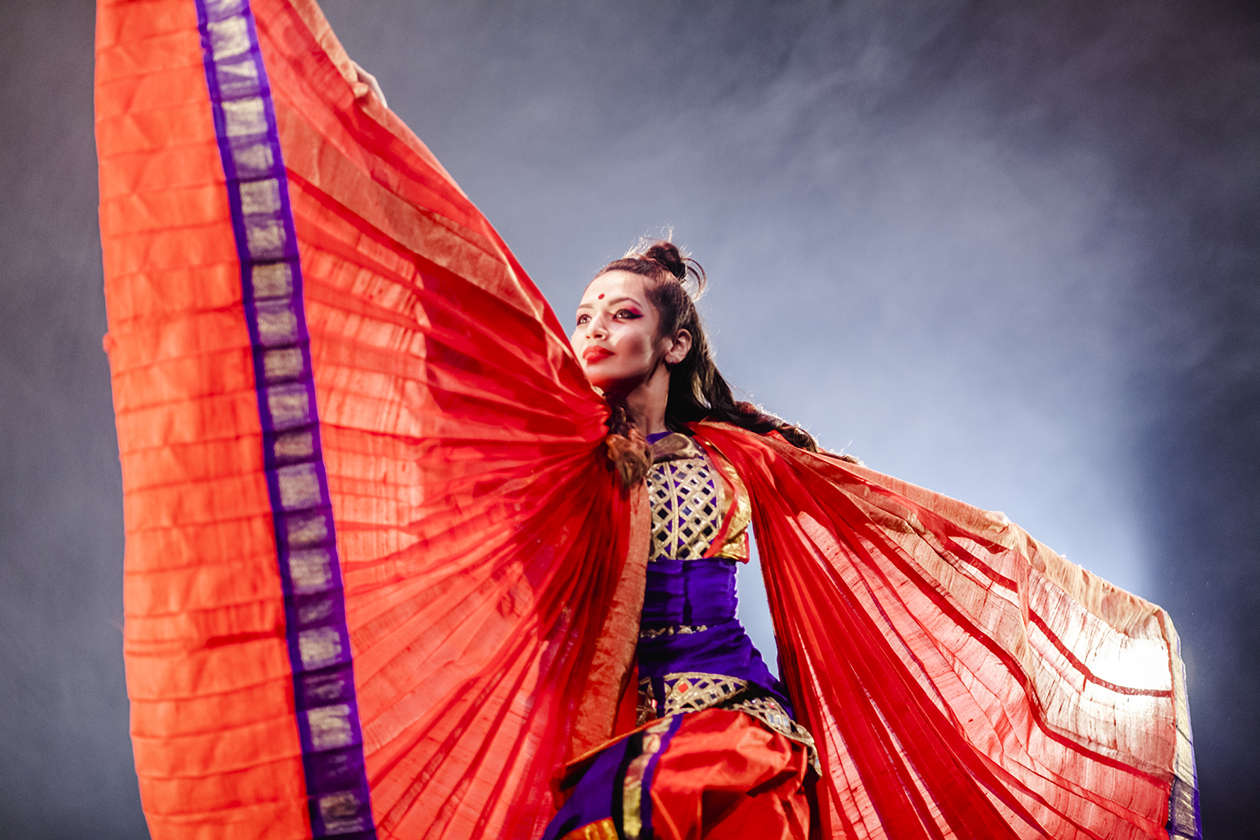 "This performance is the sequel of my graduate collection Exodus. The Golden Calf is a metaphorical exploration within the contrasting contexts of religion and sexuality."

"The versatile symbol of the bull illustrates the conflict many people experience growing up being gay in a religious and/or a straight world. It is about an inner fight between shame and authenticity, and the struggle of overcoming the deeply rooted and built-up rage created by shame. The Golden Bull is the last obstacle to conquer into a shameless, authentic and content life: The Promised Land." All photography credits to Emmi Hyyppä.