She has swelled out, her fragile limbs are more robust, and her rounded hips suggest the possibility of fecundity. Barbie’s less precocious British cousin, the Sindy of my childhood, was 30cm tall and also improbably thin; her inflexible joints made getting dressed something of a wrangle. If recreated in human proportions she would be a freak of nature. Yet this didn’t seem to matter, for she had superhuman qualities: ‘more than a doll, she is a real personality’ the advertising displays claimed. Her facial features – tiny nose and huge, sideways glancing eyes – were rendered with some delicacy, while Medusa-like hair sprouted from her oversized head. I brushed it firmly, using the white plastic hairbrush provided. But although the instructions said ‘her hair can be washed and set time after time’, the gleaming nylon strands always reverted to their original configuration. 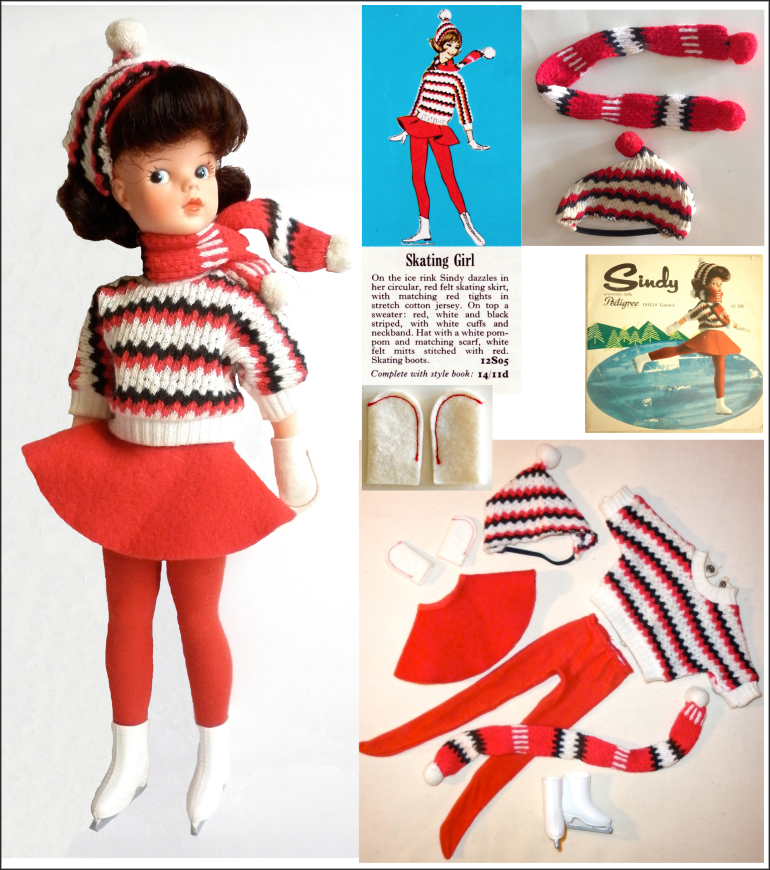 Sindy’s wardrobe was that of a ‘free, swinging, grown-up girl who lives her own life and dresses the way she really likes’. I particularly liked her ice skating outfit. The striped jumper and circular red felt skirt fastened with poppers at the back that in reality would be the size of dinner plates, while the hat had a pom-pom as big as a football. Red tights and white skating boots with painted silver blades completed the look. “On the ice rink Sindy dazzles” observed my treasured ‘Sindy’s Bazaar’ leaflet (I firmly ticked all the outfits I had been given). I, too, was interested in ice skating, although found it tricky and did not dazzle. I had read Noel Streatfeild’s 1951 classic White Boots many times. Harriet, a sickly ten-year old, is advised to take up skating in order to strengthen her spindly legs, and becomes a champion. Lalla, her charming, confident – although inwardly vulnerable – friend, has to accept that she will never be as technically skilled. Those white plastic boots with their pretend moulded laces were a great help to Sindy too. I could just about prop her up in them, despite her weak ankles. Streatfeild seemed to have cottoned onto the transformative and empowering abilities of footwear. Amongst her numerous children’s titles are Ballet Shoes (1936), Tennis Shoes (1937), Party Shoes (1946), Movie Shoes (1949), New Shoes (1960), Travelling Shoes (1962) and The First Book of Shoes (1967). 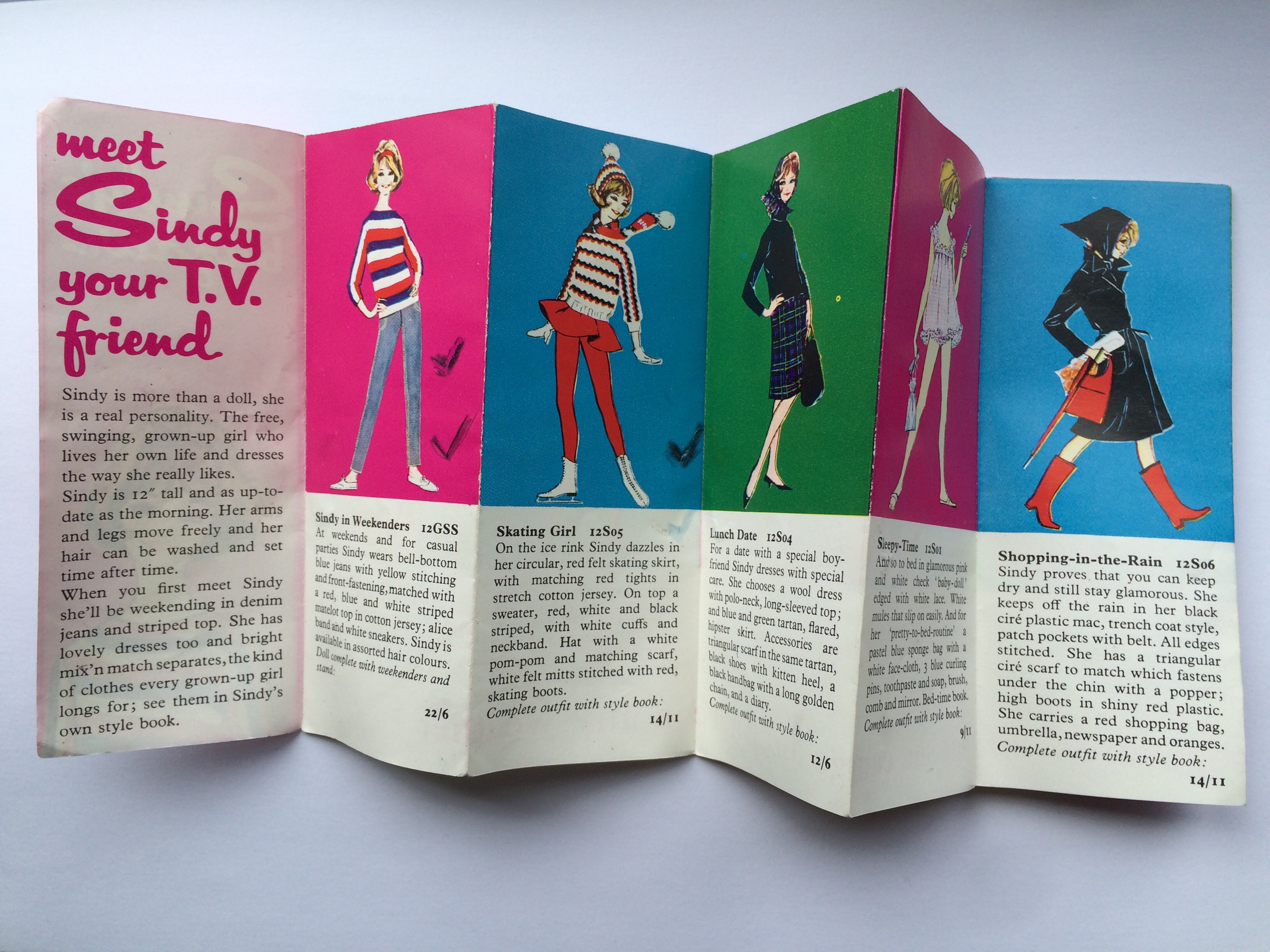 During the last six months the little-girl Harriet, without her noticing it, had disappeared and a new Harriet had taken her place. A Harriet who looked much the same outside, but was more of a person inside. As the day of the test came nearer Harriet was more and more wrapped up in skating, and less and less noticing what people were thinking or saying. She had private plans. … she was sure if she worked she would get better.

The Sindys and Barbies of this world were pretend doers, with an entire range of ‘separates’ (a little used term today) to fit different social and professional occasions, just like those prescribed by glossy fashion magazines. The illustrations in my booklet bore a direct relation to contemporaneous fashion illustration although I didn’t know it. Each ensemble was purpose specific: ‘Weekenders’ featured bell-bottomed blue jeans and a matelot top and sneakers; ‘Lunch Date’ (‘for a date with a special boyfriend’) included a wool dress, handbag, kitten heel shoes and a diary, while ‘Shopping in the Rain’ proved ‘you can keep dry and still stay glamorous’. Protected by a vitrine of plastic and backed by brightly coloured card, these curatorial constructs could be purchased from Woolworths on a Saturday in any high street in the land, training young consumers for the sartorial delights of adolescence and, eventually, adulthood.Did Sindy’s impossible physique damage me? I don’t think so. I accepted that she was an alien form, within the terms of her own strange world, just as I accepted that Harriet and Lalla were ‘not real’. Nevertheless, they were animated within my imagination. Did her wardrobe inform my fascination with fashion? I think it did, partly because its satisfying ‘fit’ with Sindy’s strange physiognomy and compartmentalised lifestyle had a sartorial logic. But the clothes only told one side of the story; they implied that dressing as if successful was all that was required. It took literature in the form of White Boots to make the point that Harriet’s success is contingent on hard work and application. On the other hand, there’s nothing wrong with a short cut now and again, and we all try out different ways of being. Either way, clothes are a great form of material enactment, an amplification of potential, a bracing up of weak ankles and fragile interior landscapes. A pair of white leather (or moulded plastic) skating boots with razor sharp blades with which to slice at high speed through the slippery surface of life is a fairly assertive accessory.Further reading: How Barbie Crushed Sindy, BBC News Magazine, July 2012, accessed 27 May 2016.Read all posts by Claire Wilcox