Dressed as Claire, Perry took us on a whistle-stop tour through the tropes of masculinity and then answered questions from Nilgin Yusuf, Creative Director of School of Media and Communication here at LCF.

The Turner Prize Winning artist, ‘transvestite potter’ and social commentator has explored masculinity through his 2016 television series All Man and in his book, titled The Descent of Man (Penguin Books). Seeing gender as a sliding scale, Perry tells us, with much humour, talks about masculinity and being a man in a dress…. 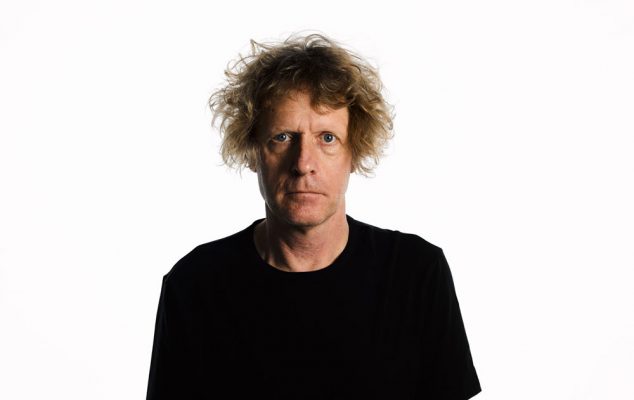 “I’m here to talk about the Department of Masculinity, which is my jokey title for this idea that as men, we’ve got this propaganda the whole time about how to be a man and what masculinity might be. It comes from our families, friends. But inside every man is a hegemonic example of a man. So, we all have an example of masculinity or femininity that we aspire to, that is often unconscious but it’s there. My one’s a teddy bear.”

“Masculinity is learnt. There may be very small elements that are generic but mostly its learnt. We pick it up from birth, all the tiny tips and winks that’s how we take on our gender role, from our family, context and experience. But people like the idea that things are genetic because they don’t have to take responsibility for it, or they don’t have to blame their mum and dad or society.”

Masculinity is always in crisis

“The other thing about masculinity is its always in crisis. Which implies that it is flexible, it can change. If you look back in history, people have decried, in the Civil War era and the Victorian Era, ‘oh no men are under threat from advances in culture and feminism and things like this.’ And I like that, and often you can tell when masculinity in crisis because they start wearing beards a lot.”

Men’s clothing is a bird hide

“One of the principle things that’s happened in recent history is this – men’s clothes as a bird hide. Men don’t want to be looked at. They try to show you all these lovely details of a suit, but it’s just a bird hide really. Its invisible, it’s the uniform of people in power. It’s the default man thing. And even in other more primal hierarchies like a gang of petty criminals, they all wear exactly the same clothes. They wear what I call ‘coward’s black’. Men seem to have a fear of colour. It’s because they’re frightened of making a mistake maybe, but also it makes you visible, it makes you stand out.”

He compared it to an Angela Merkel pantone chart of suits and a spectrum of Hilary Clinton suits. She’s taking on the suit to be taken seriously, but in colour.

“Functionality seems to hover in the background of all male dress. Even fashion shows these days, men have ‘man bags’ because ‘any minute now’ they might need something.”

“You talk to men about masculinity and they’re not really aware of it. It’s like talking to fish about water – ‘you mean there’s air, never heard of it!’. Because their version of the world is never questioned.  They think that the masculine viewpoint is it, its never challenged.”

Gender is a performance

“And people say ‘but how can it be a performance, it’s so natural, it’s so authentic’. But one thing men love is authenticity. These guys (pointing to an image) are Japanese Hell’s Angels and every detail is authentic and considered. In Paris is Burning (nineties film about drag queens in New York) there’s a category called ‘realness’ and there’s these camp guys and they have to pretend to be straight businessmen and they’re really failing and it makes you realise how well heterosexual men are fulfilling their acts. We’re all performing all the time.”

Sexuality will always be behind the times

“Our sexuality is rooted in our childhoods, so it’s always a bit out of date. That’s why Fifty Shades of Gray sold so well – because being submissive was depicted as a leisure activity, whereas thirty years ago it was a woman’s lot. Even today I doubt they sell many copies in Afghanistan.”

Cage fighters can be soft

When asked about how he’d describe himself, as a man, in relation to all these tropes he said:

“Oh, god I’m so manly. I think where it comes out at its worst, or best, is I am quite competitive. And I can get quite angry. I own those qualities in myself.

Since I was a child and first put on dresses I never thought I wanted to change my gender or anything like that. I always felt that I was a man in a dress. I like dressing up as a woman because I am a man and so it was boundary breaking and the taboo of that is a turn on.

Nobody is as sexist, in many ways, as a transvestite. Because we are really invested in gender difference because it turns us on. So those roles, we cherish them and polish them in many ways. It’s a delusion if you think trannies like me are gender warriors. We’re not, we’re gender policeman. But that’s just my personal opinion.”

Perry’s playful analysis of masculinity then opened up debate to the floor, and was a befitting starting point for the Masculinities Research Hub conversation.