LCFBA16 season kicked off earlier this week with the annual catwalk show, featuring 17 collections by 35 designers from across several design courses. Apart from being a celebration of this year’s graduating cohort, it was also the presentation from which the Collection of the Year 2016 Award winner would be selected. A prestigious industry panel, which included i-D digital editor Steve Salter and Machine-A founder and buyer director Stavros Karelis, deliberated to select the winners and presented the award to collaborators Sam Thompson, BA (Hons) Fashion Design Technology: Menswear and George Oxby, BA (Hons) Fashion Sportswear.

It has been a busy couple of weeks for the students but we were able to grab some time with them to learn more about their winning collection and the students themselves. Where are you from?

George: I was born and raised in Brussels but both of my parents are English and I moved back here when I was 15 years old to complete my secondary education.

Sam: London, I’ve Lived in Clapham all my life.

George: I play the cello. The last piece that I worked on was the Elgar cello concerto. However, I’m way out of practice so don’t ask for a performance.

Sam: I didn’t decide to study fashion until very late. I’d stopped studying art at 17, but was consciously expressing myself through the way I dressed. I was doing my A-Levels in Maths, History and Philosophy, but having far more fun getting dressed for class than actually learning in them. I heard that I got into LCF, right before my last exam.

George: The initial concept for my part in the collection came from the Germanic word ‘vagabond’ meaning wanderer. We wanted to create something that looked worn, slightly mismatched and almost ill-fitting, as if the person were picking up the garments as they went. The image that most inspired me is a photograph called ‘Vagabond à Ouagadougou’ by Roman Bonnefoy. It has a genderless, layered beauty that has a strong impact.  The natural layering created by the pile of jackets and bags creates such a strong silhouette.

Sam and I were a solid team. His particular focus was on the manipulation of the proportions in archetypal garments (denim and flight jackets among others).

I imagined a character that collects pieces that over time become stained or dyed down to the same muted or dark tones. They don’t necessarily fit or make sense, but something about that works. The more he wanders, the more they become uniform. Piles of clothes one on top of the other create the imposing silhouette that itself is a survivalist form of security. #vagabondascending 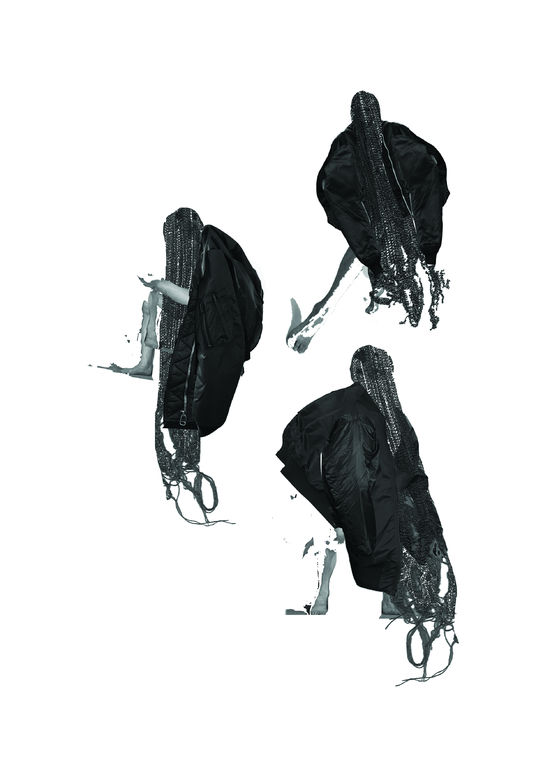 Sam: The concept for the collection came from an experience I had one night, last December. I was standing at a bus stop about 15 feet from another guy and because of what I was wearing, I could feel that he was afraid of me. Every time I moved slightly, he would move another several feet away from me. I felt embarrassment by it but also strangely, an intense sensation of power. I decided I wanted to make clothes that would make the wearer feel dangerous, and allow them to feel that same sense of power.
The collection was intensely personal to me not because it’s reflective of a place that is important to me or about someone whom I really care about but because the need to have a dark, psychotic power was almost something I could relate to.

As a result, many of the garments in the collection are somewhat sinister compositions of things I wore that night. I wanted to twist them and reshape them so that they became an expression of the attitude which the young man felt I had embodied that night. The collection is about an outward expression of menace and intimidation that hides an inner feeling of fragility. A contradiction.

Collaborating with George Oxby really allowed me to flesh out the idea, and the character behind it. The wanderer or ‘VAGABOND’ became the emblem of the collection; a person who moves alone, never known or knowing but always an imposing survivalist on a brutal landscape. 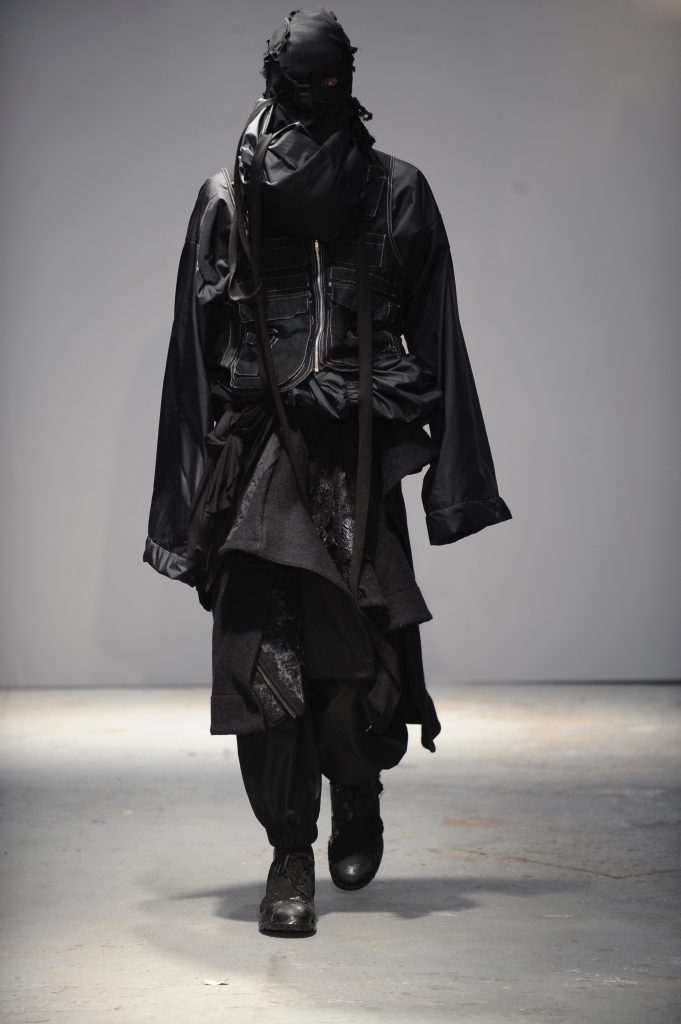 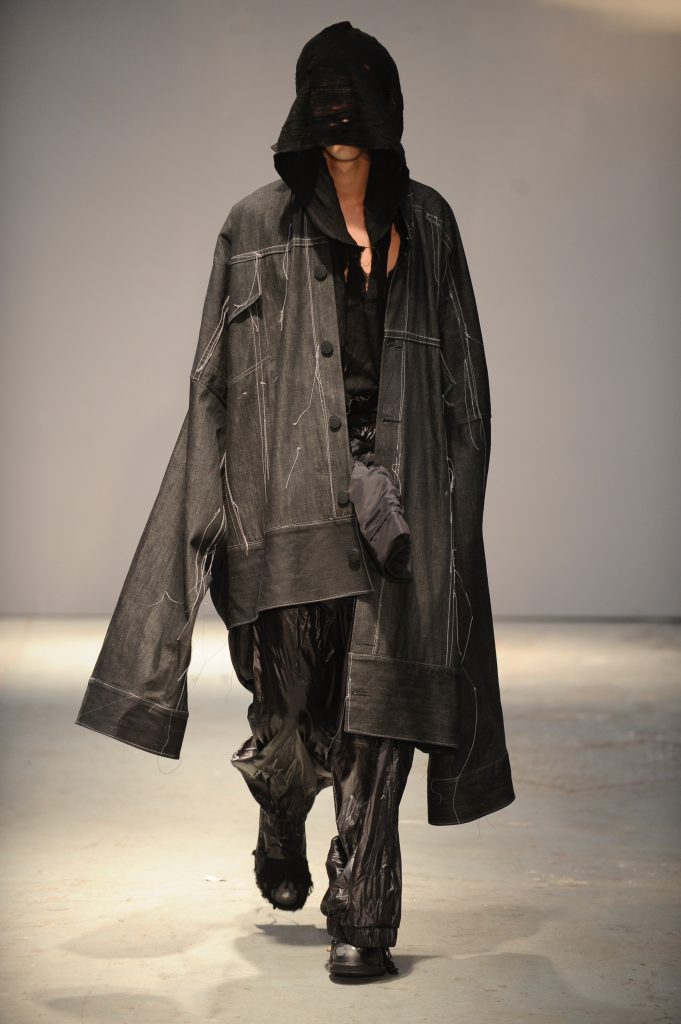 George: Fashion for me is the intermediate between business and art. It has a tangible purpose, to sell and be received well, but also must be creative, challenging and sometimes shocking.

Sam: There are many things but I think most importantly it is the act of creation. To be able to fully, personally, pull something into the world from nothing is an incredibly powerful sensation. I sometimes look back when I have finished a piece, to trace it to its roots in my imagination. Sometimes it leads back to a photograph or conversation, but occasionally they come from the smallest scribbling of an idea that came to me late at night on the bus home. That’s when they’re the most fulfilling.

George: Working with knitwear and denim, as well as nylon, webbing trims and outerwear endurance fabrics such as Cordura, we created textures and silhouettes that, whilst being heavy and layered, maintain a simplicity and minimal quality in their colour and fabric choice. The mismatch of garment styles is tied together through trim, detail, length and layer.

Sam: In many cases the designs are really fleshed out through pattern cutting. I was trying to play with the silhouette of garment archetypes without changing the seam compositions and keeping as true to the original garments as possible. On a piece like the denim jacket where seams are everywhere, this is easy, but with the MA-1 Bomber, where there are only a few seams, you have to suddenly build a lot of shape into very small areas. That was the hardest garment to get right. 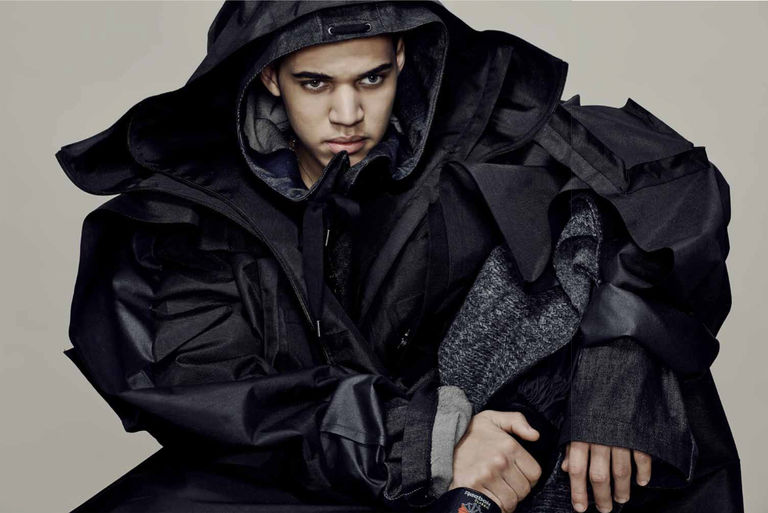 George: At LCF the focus is split down the middle between craft and creativity. A raw edge works but knowing how to set a sleeve in properly is just as important. For me this is a real benefit, as graduates we come out of it as rounded students.

Sam: I think in the end it comes back to the people. A University really succeeds or fails based on its staff and at LCF, the people are all so involved and passionate about what they do. Their passion is infectious and I have felt that particularly about my Pattern Cutting tutor. She more than anyone, pushed me to really experiment in what I was doing both with draping and flat work. I think her influence has birthed in me a lifelong interest in the process.

George: Without a doubt the sportswear tutors. I found a family when I joined the course and despite always going against the grain with regards to the technical aspect of the course, I will never regret getting involved.

Sam: The menswear course places a really strong emphasis on technical development. To be able to leave, confident enough in my pattern cutting ability and to be able to convert most things I design into proper professional patterns and from there sew them up, is exactly what I hoped to achieve. I feel that LCF is often slagged off for encouraging an interest in the more technical side of design but I would argue that it remains one of the most important facets of our industry. Truly amazing pattern cutting I think is the future of menswear.

George: My second year work was featured in two separate editorials for Pause magazine and when I was in first year Will.I.Am wore a pair of trousers that I had designed in a collaboration for two episodes of The Voice UK. I was in ‘You May Now Kiss’ – editorial in Garage Magazine, shot by Alex Sainsbury profiling some LGBT couples in East London and I have been in an editorial for I-D magazine styled by Matthew Josephs featuring FKA Twigs. Finally, I have been featured in a short fashion film for Channel 4’s random acts. 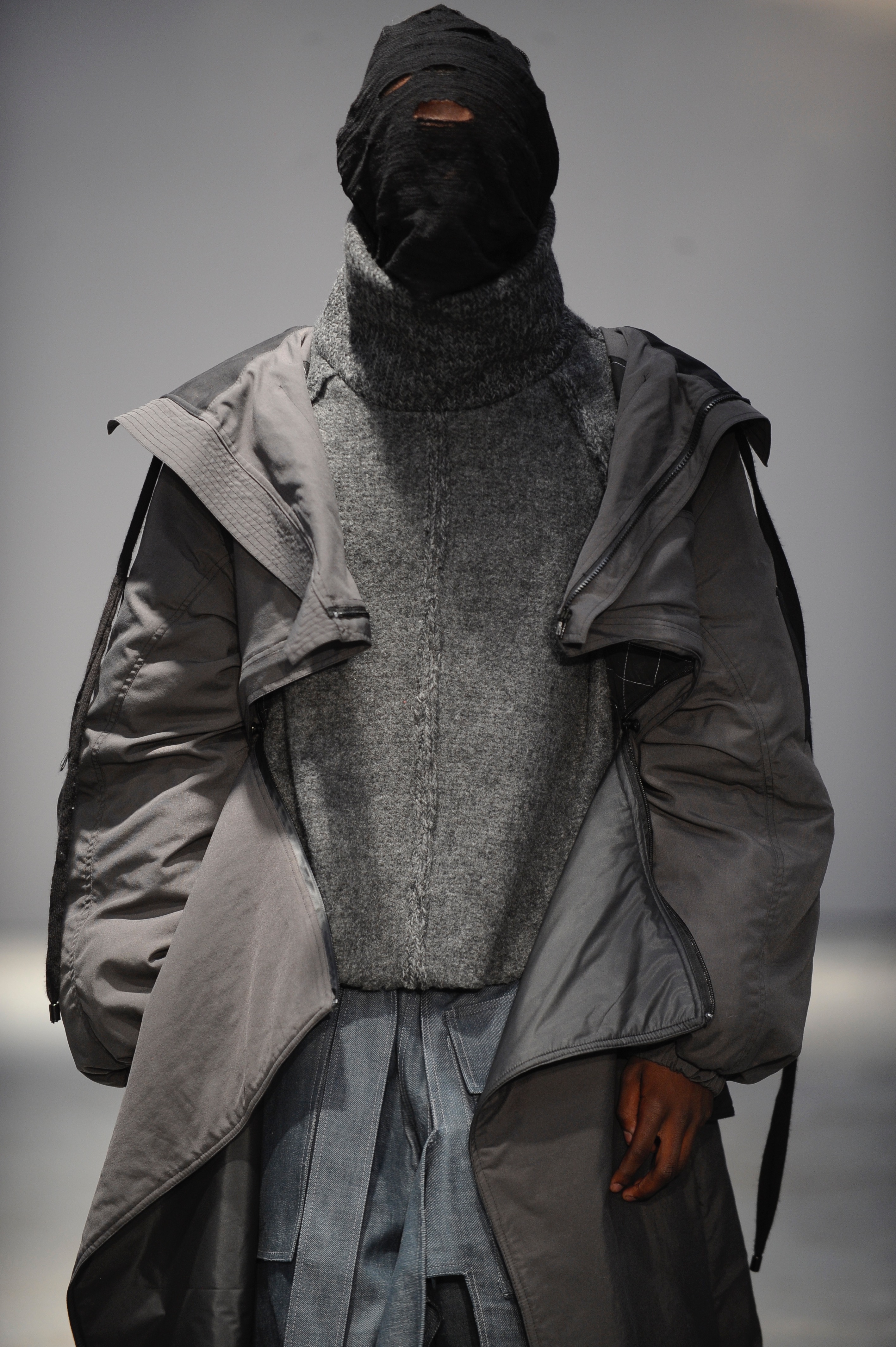 Sam: I worked for Rory Parnell Mooney in the run up his SS16 Collection which showed under the MAN umbrella at LC:M.

What did you learn on your work experience/placement?

George: I learnt about sourcing, where to find materials and the time required for delivery. Sometimes when you least want to do something, you just have to. And every time you just do, that process becomes easier.

Sam: It was interesting seeing how Rory’s approach to design differed so much from the process we are encourage to follow at LCF. It was so much more organic in how the collection slowly evolved with one garment inspiring another, and a new fabric growing in to four new looks. There is a vast difference between creating a 25 look collection and one with only 6 as we have had to for the press show so it gave me a feel of what the future might hold for me if I choose to pursue my aspirations of having my own label. I also decided that I do not want to work for someone unpaid ever again! 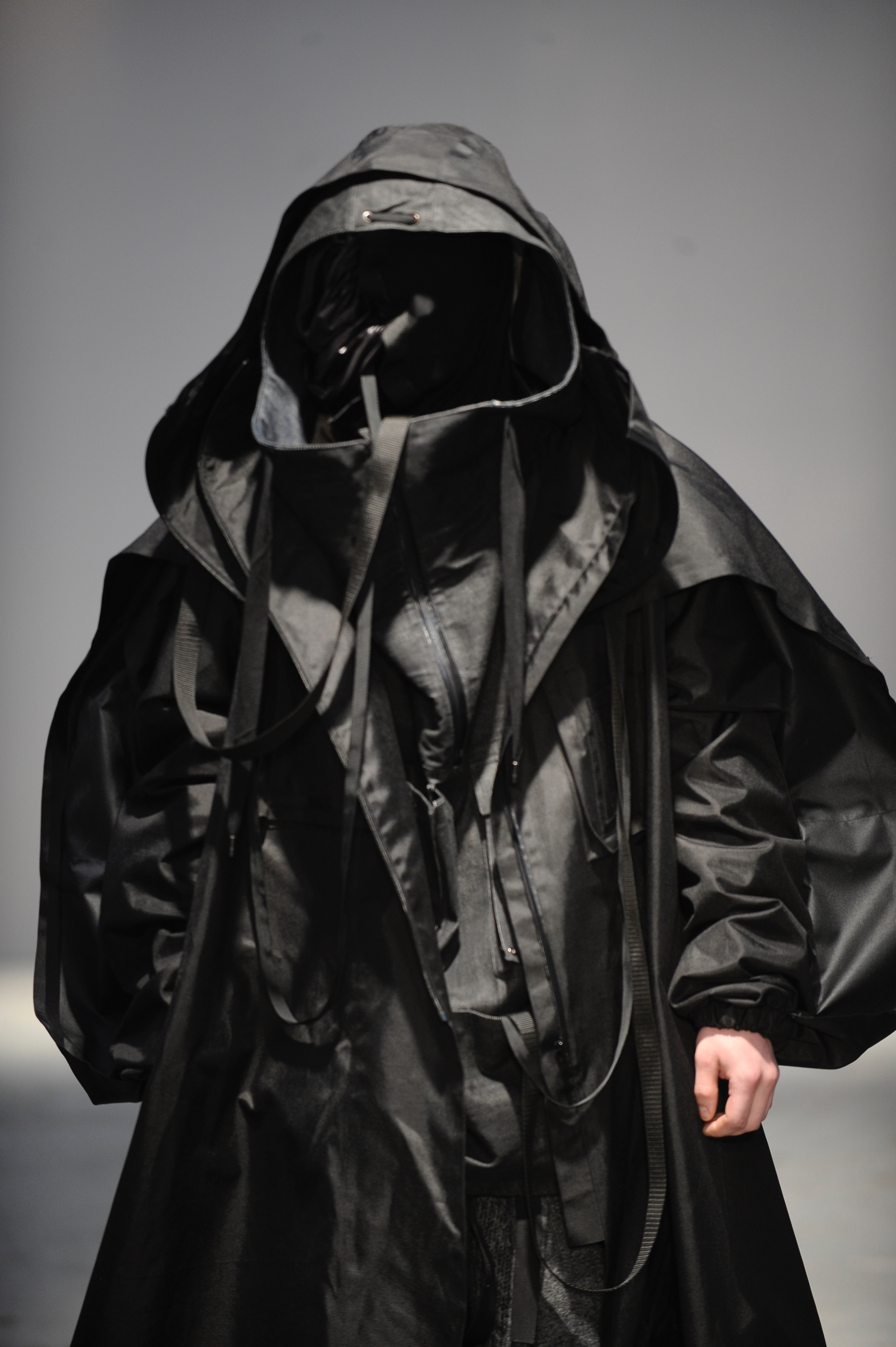 Sam: I remember seeing a live interview with Bart Hess while I was in my first year. His work made a massive impression on me.

George: I don’t have a muse as such – but I often think about my grandmother, Ursula Oxby who went to the Slade School of Art and made clothes out of parachutes during the war.

Sam: Always, but they are always different and always imagined/exaggerations of a particular personal state of mind. 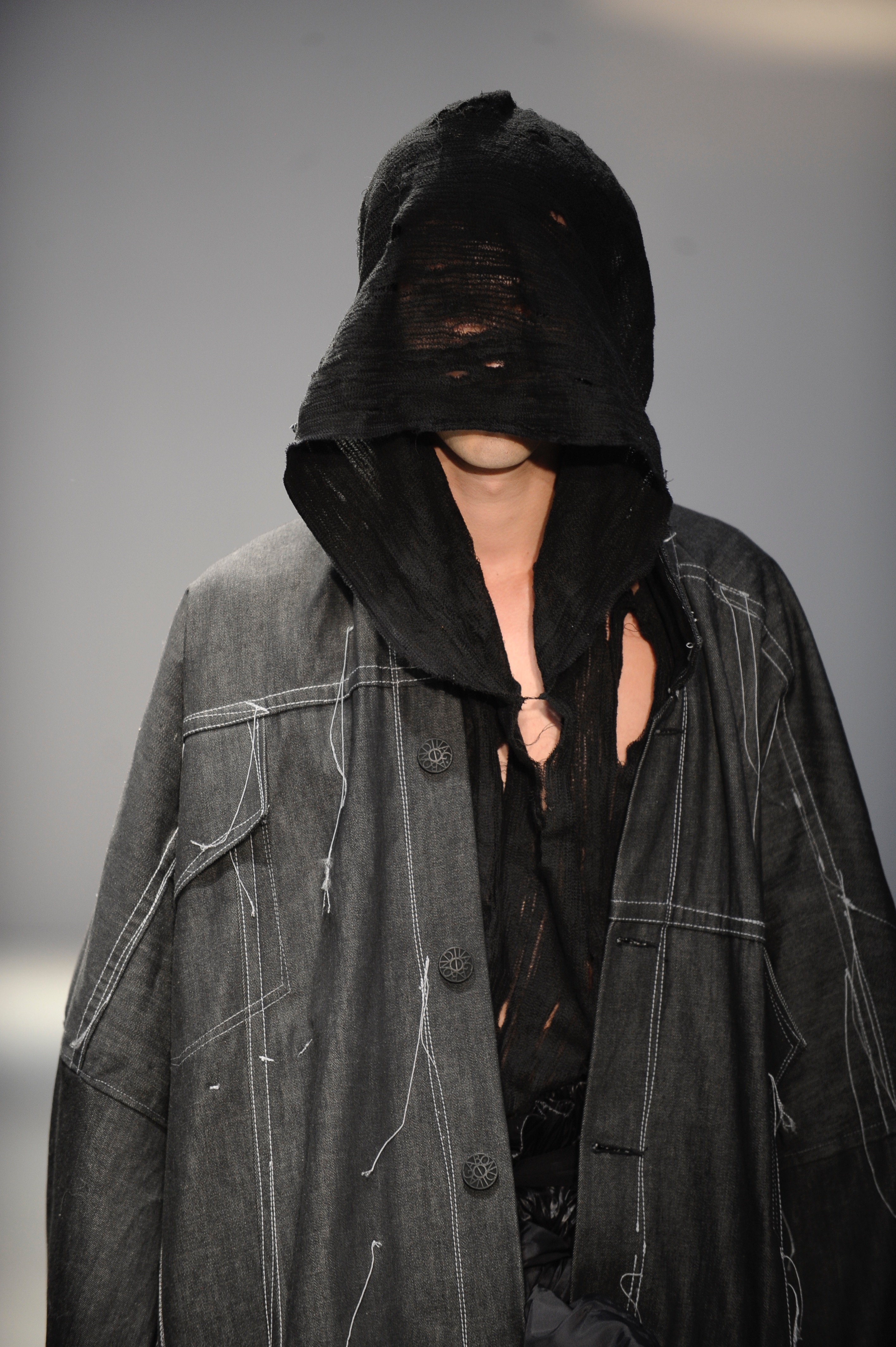 George: The mix of old and new, decay next to squeaky clean, a crack in the wall of a new-build.

Sam: Mostly chance encounters, sometimes simply noticing someone on the tube who has something a little bit ‘off’ about them.

George: I would like to be building up my own label, as a collaborative partnership or on my own. Either way, the future is exciting.

Sam: I sort of aspire to be like Cristobal Balenciaga, who famously was one of the only couturiers who had the skill to sew anyone of his creations himself. I would really like to look into the couture process in the future. At the moment it is such a transcendent other world thing within the industry but I feel there is a growing sense of the appeal of wearing couture to the supermarket, or out clubbing. Just an idea at the moment, but wouldn’t it be wonderful. Affordable couture for men! 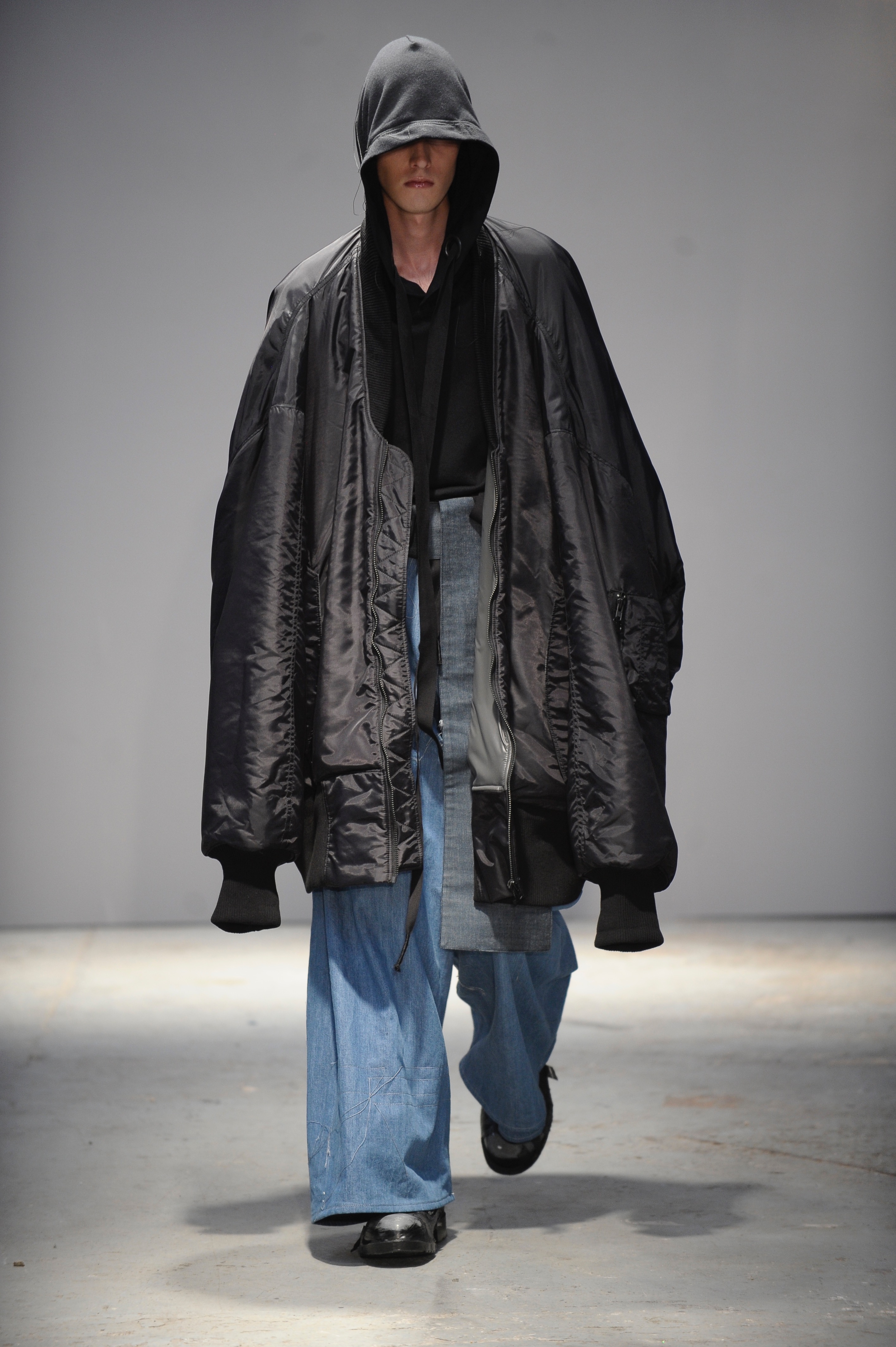 George: LCF have given me a place to thrive, learn, challenge myself and be challenged by others. From my tutors to the creative director, being told that it’s not good enough is sometimes the hardest but best thing to hear and LCF is a safe place in which to get that feedback.

Sam: LCF encouraged the technical side, and there is no greater technical challenge in fashion than couture

Sam: Learn to love the process! And to challenge yourself through it. It is frustrating at times, exhilarating at others, but if you can find reward in it, then you will be set, not only for the course, but also (I hope) for life after it!!

Sam and George in Wonderland, DAZED and i-D