In his celebrated tome Walden, Henry David Thoreau wrote that “the mass of men lead lives of quiet desperation,” ultimately failing to live up to their predestined potential and recognition in the universe. However, in the current socio-political climate of the world, it might be possible that the only arena in which men are overwhelmingly underrepresented is fashion.  By Marley Healy. 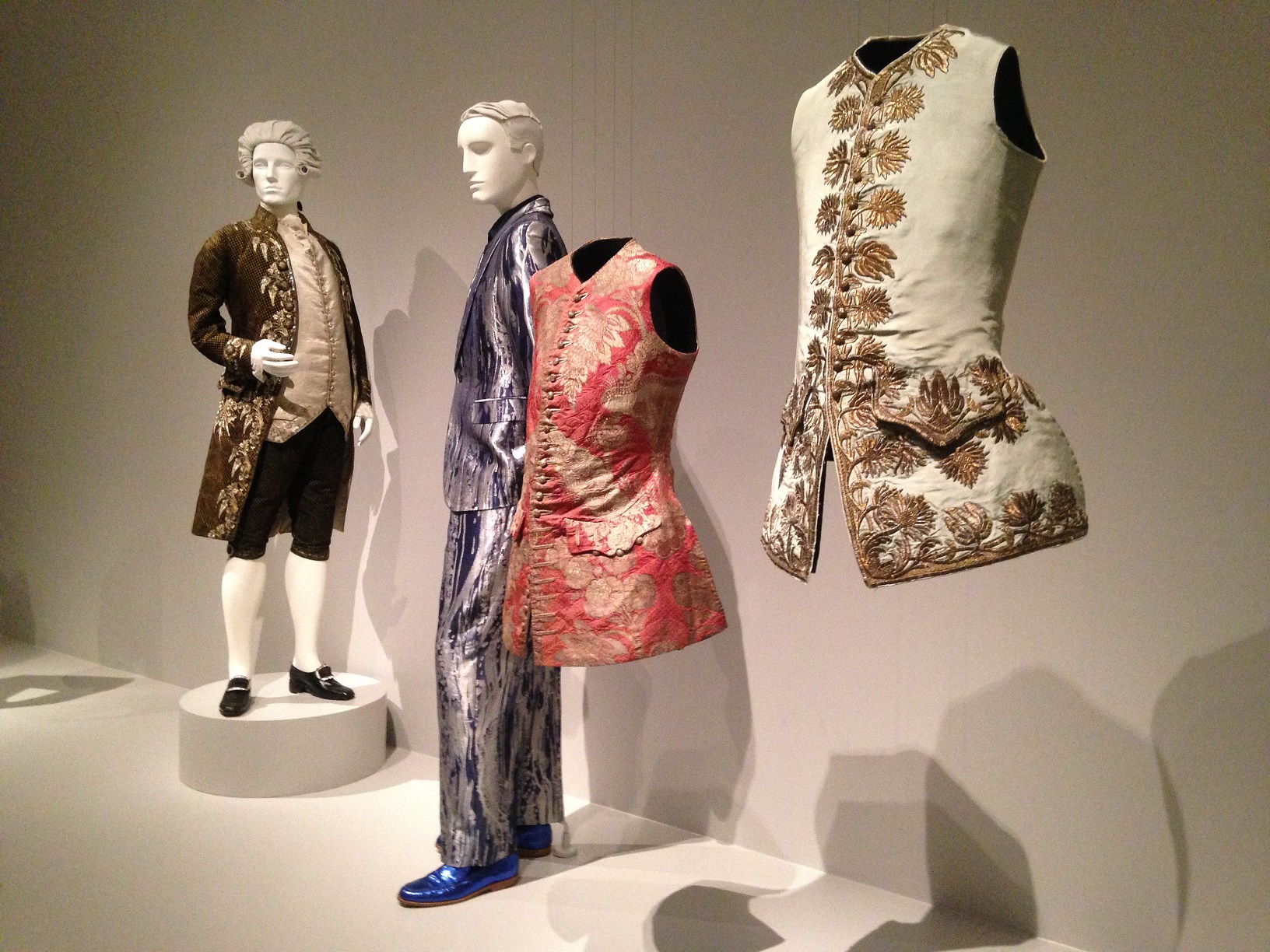 Over the last five years, curators Sharon Takeda, Kaye Spilker, and Clarissa Esguerra of the Los Angeles County Museum of Art (LACMA) have worked relentlessly to grow and refine the menswear holdings in their Costume and Textiles department in order to cultivate a comprehensive view of menswear in the modern world. Reigning Men: Fashion in Menswear, 1715-2015 is an all-male fashion extravaganza bursting with a sense of fraternity across style, pattern, and silhouette that demonstrates how menswear has been, and still is, active in influencing fashion. 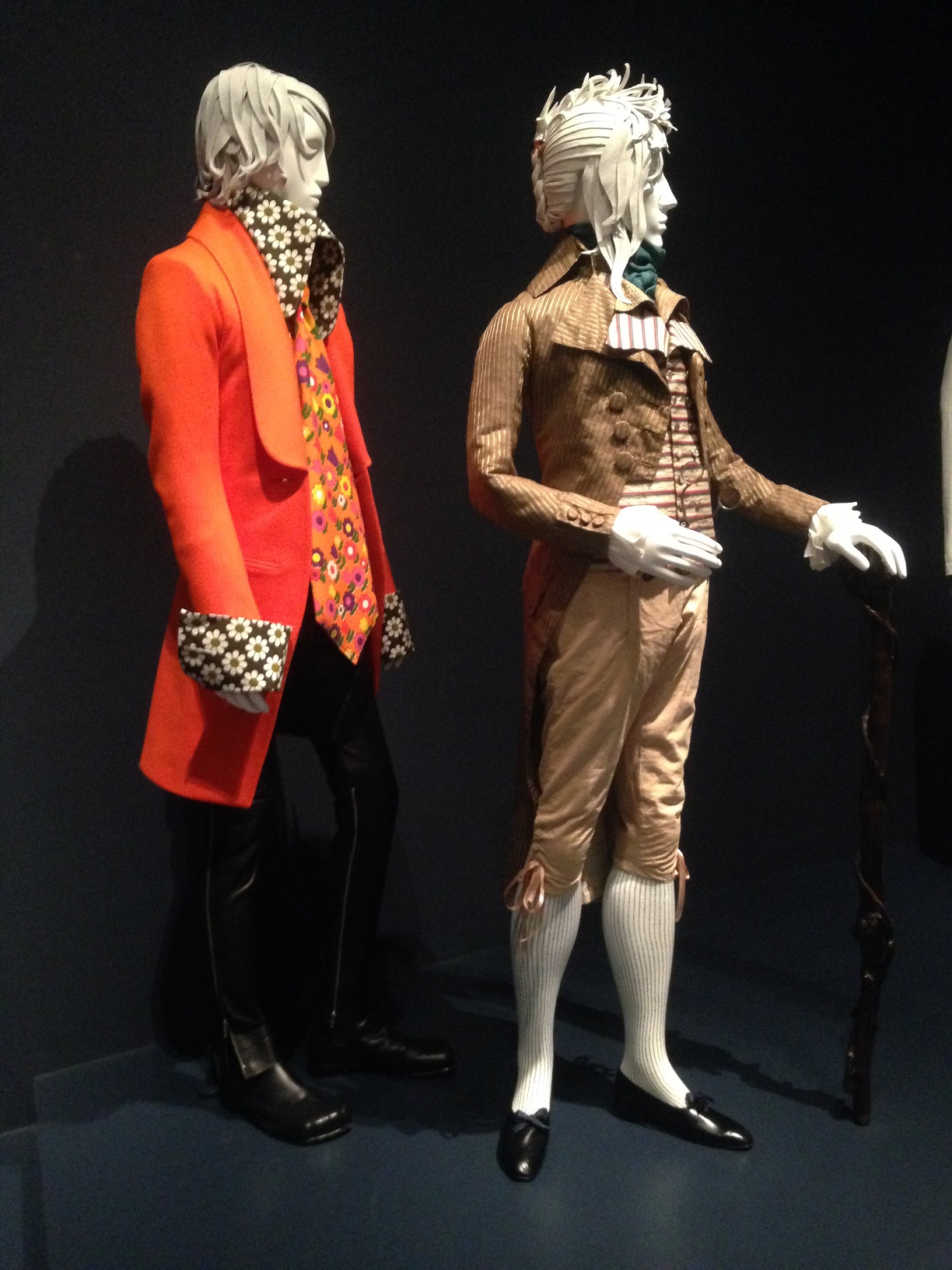 Reigning Men features 200 looks arranged into five thematic sections, Revolution/Evolution, East/West, Uniformity, Body Consciousness, and The Splendid Man– each one further categorised into sub-sections. With so many pieces on display, viewer might wonder just what the curators could have possibly left out! Clarissa Esguerra, Assistant Curator of LACMA’s Costume and Textiles department, discussed the extremely conscientious decision-making process that she and her co-curators went through in culling the options for each section. When asked if there was a particular favourite, Esguerra lamented, “It’s like trying to choose your favourite child!” Revolution/Evolution showcases the 18th century dandy alongside Vivienne Westwood-clad iconoclasts from the 21st century. East/West explores the cross-continental sharing of textiles, patterns, and silhouettes since the 17th century. Uniformity recognises both the stylish and functional attributes of military uniforms and how they have influenced modern menswear in the realms of traditional military, business, and casual wear. Body Consciousness explores how obsession with body image and manipulation of the body is not a uniquely female preoccupation. Finally, The Splendid Man investigates the myriad textiles, patterns, and embellishments most typically associated with women’s fashions that have adorned men’s garments over the last 300 years. While the thematic sections may be fairly self-explanatory, each dives head first into a 300 year historical survey that shuns an established chronological order, choosing instead to focus on a narrative that demonstrates the fluidity of man’s fashion across time and physical space. On one plinth, a viewer can see a Walter Van Beirendonck ensemble positioned in tandem with its inspirational counterpoint, an Incroyable ensemble from the 1790s. There are both seamless transitions and incredibly stark contrasts from one ensemble to the next with each embroidered waistcoat and damask-effect print tuxedo jacket competing for the viewer’s admiration. This arrangement creates an interesting dichotomy between the various genres of menswear where some things are so vehemently in opposition to one another in design elements like colour palette or textiles, but bear extraordinary resemblance in construction or silhouette. These garments are intended to be viewed and appreciated as art or craft objects, hence the somewhat austere backdrop of monochromatic plinths and walls and absence of superfluous contextual materials. The simplicity of the display unencumbered by too many accessories allows viewers to focus on the opulent displays of embroidery or masterful construction without further distraction. Peppered throughout the galleries, viewers are privy to sporadic moments of intimacy between mannequins, demonstrating connections between multiple genres of menswear. There are also instances where the mannequins are arranged in such a way that they play with the lighting scheme to create shadows in which other mannequins partially reside. Intentional or not, this arrangement alludes to the notion that fashion appropriates design elements from the past, and that modern men are standing in the shadows of those who came, fashionably, before them. Just like womenswear, the silhouette of menswear has changed dramatically over the course of 300 years, a major point that is reinforced throughout the exhibition by the fact that the curators used five different mannequins to accommodate these changing silhouettes. Some mannequins boasted broader chests while others carried a much leaner, athletic silhouette, and when the curators could not find mannequins appropriate for their 19th century looks, it became necessary to create their own forms from scratch. The arrangement of ensembles within each subsection provides comparative examples of shifts in silhouette that are both subtle and extreme. Melinda Webber Kerstein, Costume and Textiles Installation Specialist, gives an excellent overview of the trials and tribulations of dressing and altering mannequins to fit these garments in her post for LACMA’s blog, Unframed. These looks would not be complete without the resplendent wigs created by renowned costume craftsperson and milliner for films, Deborah Ambrosino. The material used to make these wigs is actually horsehair interfacing, the same kind used in the construction of menswear, carefully moulded and finnessed into the astonishing configurations of popular men’s hairstyles across three centuries.

In addition to their current position modelling at LACMA, these fine specimens of multi-century menswear also grace the pages of an exquisitely photographed and impressively comprehensive visual history of menswear in the accompanying exhibition catalogue. Reigning Men demonstrates the magnitude of menswear in fashion history not only competently and effectively, but with a veneer of reverence and appreciation due to such splendid art objects. This exhibition revokes the notion that fashion is solely a “feminine” preoccupation and reveals the profound influence of dress in the lives of men, and vice versa.

Marley Healy is an alumna of the MA Fashion Curation course at London College of Fashion. She works as a consulting curator in Fashion, Dress, and Textiles based in San Diego, California. Her recent projects include the kimono exhibition Threaded, Traveled, Treasured at the Japanese Friendship Garden in Balboa Park and art and costume installations at San Diego Repertory Theatre.

The opinions expressed in this article are the author’s own and do not necessarily reflect the view of the Centre for Fashion Curation.