The Evening Standard’s Progress 1000 is a list of London’s most influential people. It is spread throughout public figures such as politicians, sportsmen, scientists, architects and actors. One of the categories is that of Trendsetters, where every year influencers like Victoria Beckham, Nick Knight and Lucinda Chambers are named for their impact on the industry. This year, Professor Frances Corner OBE, head of London College of Fashion, was nominated as a reward for a life-long support to emerging talents. Here, she explains to MA Fashion Media Practice and Criticism student Nerys D’Esclercs what this nominations means to her and the College, her views on the future of the fashion industry and the impact of technology on culture. 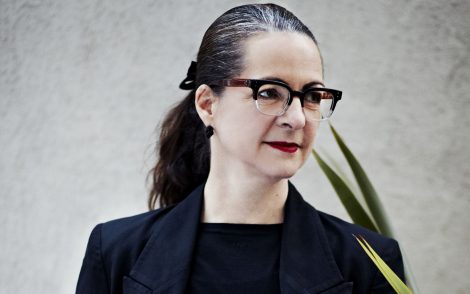 How did it feel to be nominated in the trendsetters category in the ES Magazine Progress 1000?

I was really delighted, quite surprised actually, because I haven’t been aware of a head of a major fashion education college to be nominated before. Recognising the influence of the College and what we are trying to do, I was really delighted. I think it is a great honour for the College, because if you are leading an institution, you are there to help set it. But without the students and without the staff, it’s meaningless. You can have all sorts of ideas but it is how everybody responds to that. One of the great things about the College has always been how responsive it is, how much people like to debate ideas, and if they value them, to really make them happen. For me, this is what it reflected.

With such a title, what would you predict for the future of the fashion industry?

There are several strands which I am quite interested in. One is the whole issue about wearables and what that actually means. On one level they may still remain quite gimmicky, but on another technology has become more and more part of our lives so we, as users, will see the benefit of some of our clothes doing something else for us. We will also want clothes that are really creative and really beautiful. But in the context of all of this, I think we have got some major economic challenges. As we know, there are a lot of economies that are flat-lining. There is always this push to see what the economy is going to be doing. Yes, they will be implications for us with Brexit and the Pound dropping. The luxury companies are doing very well because people from oversees are coming here to buy clothes. All of these economic challenges are bound to have an impact on the fashion industry. Some of those value-end, maybe even some aspects of the middle market may be quite challenged because if the consumers are not buying in the same way, then what is their role, what is going to happen? For us as a College, for our students, being aware of this economic background is really important. And the thinking our staff and students have about issues around how things are made, sustainability, all of those factors are really important because, as consumers, we will want to have a different engagement with our clothes. If we can offer that, then people will buy them.

You talked about technology. How do you think it will impact on culture, in a more general sense?

I think this is a very difficult and interesting question. At the College, we have got the Digital Anthropology Lab, which looks at the implications of the digital on the physical. We see all sorts of implications: you go buy things with contactless, or everybody is giving away data all of the time about themselves. We can’t put the genie back in the bottle and say, “actually I don’t want people to know about that”. I think there are some ethical issues that are going to pick up. If we have more monitoring of our clothes – because that is quite useful for us – where is that data going? For us as consumers, and a society, the implications of algorithms, the monitoring, that is going to be something that may gain more attraction than it has in the past. I would hope that technology will also help to address some of the issues around implications on the environment, implications for garment workers. I would hope that technology means that we value our clothes in a slightly different way, that we value our clothes more, therefore we respect the people who make them more, and are prepared to pay a bit more.

Then there are all sorts of business implications, how do you get these things to market, how do you sell them? I think it is going to be a really interesting time. All the issues around, you see it on the catwalk, you buy it, all the things Burberry has been doing; is that what consumers want? Who knows. Maybe they want a bit of it, maybe all of it. Some companies have gone back to being more bespoke, more exclusive. In a way, it’s a free fall; technology has allowed much more of a free fall. How you position yourself within that, for us as a College, and how do we help our students, I think that’s the big challenge.

As a consumer, do you feel pressured into using the digital as well and being influenced by this whole digital era?

Because of my age, I think I have a slightly different perspective. Yes, I use the digital, I use social media. There are some things I don’t do, because I’m not interested. We are all really interesting as human beings, how we absorb things. I’m not necessarily personally engaged with some aspects of technology because I don’t want to expose myself as much; I’m still quite a private person. How do you engage and still maintain aspects of your own privacy, although you know that a lot of data is held about you? The implications of algorithms on jobs, we know is going to be massive. If you are a creative or a yoga teacher or a personal trainer, all of those things that algorithms usually can’t do will be the area that people will be able to flourish in. Having the chance, for us as a College, to think about this is quite important, because in such a creative industry, some aspects will be turned over to technology and maybe 3D printing, all of those factors will have an implication. But it will also give us an opportunity to stay much more artisan, bespoke, because that is what people want. Some issues like how much do we reveal, how much do we want on Instagram, how much do we want to make everything public and how do we balance that with things that are more private, more thoughtful, more reflective? This will have big implications for us. Also, we all tend to be a bit perverse: just because someone tells you “That’s what you have got to do”, you think “No”. I think that has not quite kicked in yet. It was interesting that some people are coming off Facebook. You have to be much more thoughtful with what you want to do with your life, how you want to live it. And much more thoughtful about the clothes that you wear or your carbon footprint.

What is really interesting is the sort of activism that is around now; students are political in a very different way. In the late ‘60s people were out in the streets, but now there are much more campaigns, people engage. You have things like Fashion Revolution, and I think that is fantastic. Social media has allowed all sorts of things to happen, and people can’t get away with things. In the past you used to be able to hide all sorts of things from people, because technology didn’t allow this tracking of everything. I think it’s a fascinating time. Our students have the capacity to really influence things. That would be my disappointment, if students don’t own that, and don’t use it not just to change the industry, but to change the world of the consumer. We will have a lot of power to do that.

How will technology influence teaching and learning methods?

Somebody was showing me this magnetic small gadget, which you can put anywhere in the room and that operates a bit like a film crew. It could be recording this conversation, zoom in and zoom out, and immediately you could post that up online. We could share a seminar with people who couldn’t be there, it would be the opportunity for students to look at it afterwards and learn from that.

There is also this analogue and digital. How we can have this face-to-face conversation and enjoy it and debate it, and then look at something online. If you can download everything you possibly need for your degree, why do you come in, why do students want to pay their fees? Partly it is their interaction with each other, with the staff, but also the industry. In the industry, this new digital age requires companies to think about what they are really offering and it is requiring us as well to think about what we offer and how we offer it. We can’t just rely on old methods to get by. One of the great things about a creative education has always been its immersive quality. You come in, you absorb, you take chances, you push things as far as they can go. One of the most complicated things about the world we live in, because of financial pressures but also because of technology, is that we live things in a much more atomistic way. You come and do this and then go off and do that, at the same time you’re doing your job. You have your phone on, you’re watching television, you’re listening to a podcast. We don’t have the same immersive experience. It’s not good or bad; it’s different. There is something about allowing your mind and thoughts to be really involved in something for the same amount of time – that is really important. How do we do that in the digital age that we live in? That’s the challenge. And how do we make use of the digital to allow us to do that?

As a last question, what new trends and designers have you seen emerging from this London Fashion Week?

I think the trend is anything is possible.

In terms of young designers, it is great to see some of LCF designers coming through, Ryan Lo or JW Anderson, at different stages of their careers, having big influence, or Sophia Webster. That is great because the College has always had a great history of making and getting the right skills, the right tools. It hasn’t had the history of places like the Royal College of Arts or Central Saint Martins, because its degree courses and postgraduate programmes are comparatively new, but now we are beginning to see designers coming forwards and becoming quite influential. For me, that was the thing that was very good to see.

Also, people choosing more experimental spaces to showcase their designs. On one side you have live stream and people recording everything. I went to the Mulberry show, which was at the Printworks in Surrey Quays, which was quite surprising because it was quite far away, all the journalists and people turning out for it was quite a surprise. But it was actually a very big space and a lot had gone into orchestrating it. The idea of the show as performance was a reoccurring theme in London. Going to a show is like going to the theatre, it has a huge energy. Watching everybody turning up with all the gear, what people are wearing. I think that is what people want, people dressing up.