Postgraduate Festival Hosts Talk on Diversity in the Fashion Industry 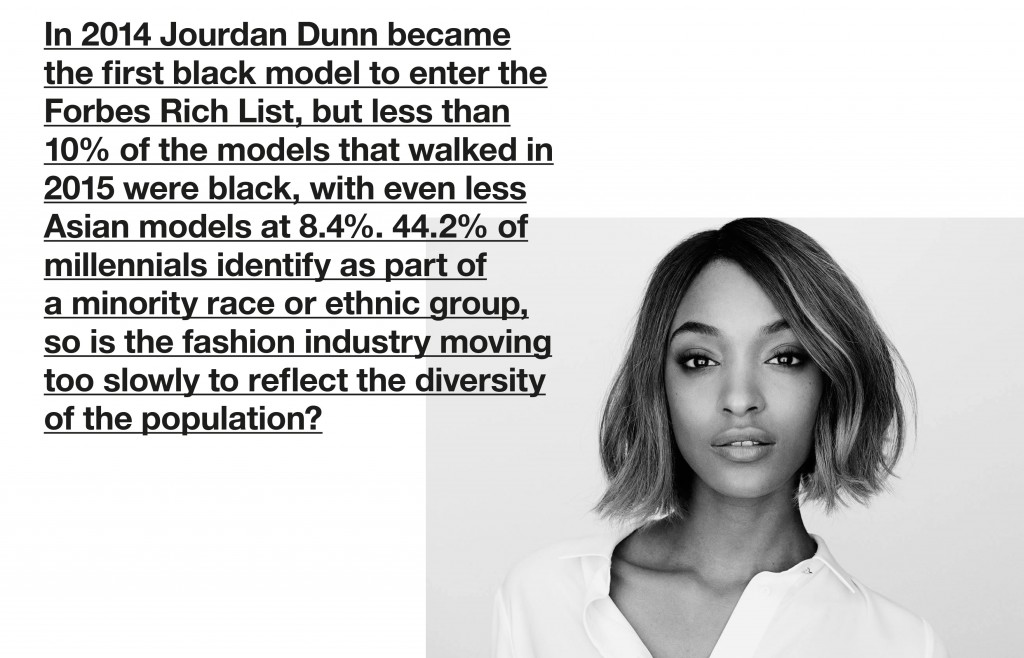 Last night London College of Fashion hosted a talk about diversity, in particular relating to race, in the fashion industry, as part of the 2016 Postgraduate Festival. The festival is a week-long series of seminars, workshops and panel debates delivered by industry specialists, on key topics across different segments of the market.

The panel was made up of Davide Wheller and Ruby Mahmood from Disorder Magazine, Susan Flynn from London College of Communication and was chaired by Angela Drisdale Gordon from London College of Fashion. It was an interactive session and students in the audience talked about their own experiences, as well as how their work seeks to contribute to a fashion industry that reflects the needs of its customer base.

The panel began by asking why it was necessary to have this discussion; why it is a perennial issue? Angela silenced the room when she asked:

‘Name me four black and ethnic minority designers that you can reel off right now.’

It was agreed that until there is realistic representation in fashion shows, ad campaigns, fashion media, and with fashion products, the conversation needs to keep happening. Davide talked about the fashion industry becoming more elitist because people aren’t rebelling against the mainstream, due to a fear of taking risks. The panel agreed that educational establishments, and their students, should be the ones to challenge stereotypes and beauty norms. Change can come from the ground up as well as the top down, and people in the public eye such as Jourdan Dunn and Naomi Campbell, do have a responsibility to speak out against prejudice within their industries.

The discussion ended by looking at ways to change the status quo. Ruby said the media should call out brands who don’t reflect the diversity of the population in their collections, and both Davide and Ruby mentioned that since the very beginning of Disorder Magazine, staff were hired on the basis of talent rather than background, and the magazine finds it easy to represent diversity in its content by also using ‘purely talent’ as the criteria for features.

It was agreed that students, as the new generation of the fashion industry, have the power to take action, but that there should be more guidance and support for them to do this. The group said that a positive step would be to have a governing body for the fashion industry, in a similar way to the Advertising Standards Authority, with associated regulatory powers.

What do you think? Get in touch and let us know.