The 1990s was a decade captivated with MTV, Britpop and cult-classic films like Clueless. The decade was a defining moment for globalisation, body image and new forms of gender conformity, much of this was portrayed in Hollywood films and TV series like Friends and Fresh Prince of Bel Air. But what role did Clueless play, if any, in shaping this current generation and the representation of women? MA Fashion Cultures recently discussed this topic after a screening at our John Prince’s Street site. The event was hosted by Katie Godman and Stacey Richards from MA Fashion Cultures. The screening was followed by a panel discussion with Roberta Degnore and Sian Hunter. Roberta Degnore is a writer, lecturer, activist, and filmmaker. Sian Hunter works in fashion marketing and is an MA Fashion Cultures graduate, whose masters’ project focused on teen movies. We spoke to Katie and Stacey after the event to hear their thoughts on the cultural significance of the film over 20 years after its original release.

Looking back at the screening and panel discussion, how do you think Clueless changed the representation of women in the mid-1990s and can you still see it today?

SR: The film has hidden undertones, on the surface, it comes across as a teen movie, with rich kids spending daddy’s money, but if you take that top layer away what we have here is a 3rd wave feminist film. A female lead and practically an all-female cast. The characters use fashion to look how they want. That to me is what the film is about, it’s saying girls you can do whatever you want. Fashion is not a bad thing anymore.

Parts I would say can still be seen today, Cher was a style icon after the film, not only did it create a fashion trend, but she was given so much screen time it was unheard of then. One point that was made in the discussion is that the director was advised to cut Cher’s screen time down as it was too much for a female! However, I can’t honestly think of a blockbuster of recent years where a female lead is seen on the screen so much as Cher is, which is a real shame.

Is the film still relatable today for women in the media and fashion?

SR: Yes I think it, it still looks at a young woman going through changes in her life, using clothing as a means for power and exploration of identity. The garments that are used in this film are still iconic, we have seen elements used again and again since its release. In some way we can all relate to Cher, a happy teenage girl who’s dealing with life, it can be viewed as a coming of age film for teenagers.

SR: My degree is in fashion design. This did help me understand clothing as a communication tool, as has my work within costume design. Now we have multimedia that is used to communicate to the buyer, clicking on an Instagram photo will tell you where you can buy each product. Marketing for fashion has moved forward to the click and buy era. In some ways I think you can get a feel for that from Clueless, just look at her computerised wardrobe that plans her outfit for her. The film was well ahead of its time. 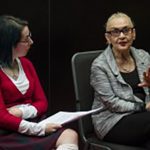 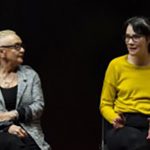 Why do you/and the panel think Clueless was so influential for youth culture and fashion back then?

KG: Part of the reason that it is so influential is that it tends to portray female friendship in a positive light. So many films portray female friends as bitchy and scheming, so it is refreshing to have a film where the female friends try to help and support each other – even if at times they are misguided! It is also a coming of age film about women which is unusual so it strikes a chord. The nineties was a time when it started to be more accepted for women to talk about sex, especially in T.V. and film. Clueless was like Sex and the City for teenagers. It made fashion seem fun and empowering and looked at issues involving women and sex in a non-judgemental way.

If Clueless was made this year, what issues should it address with regards to gender, race, politics, fashion and women?

K.G: Since Clueless is such a feel good film, watching it tends to give a rose-tinted view of the 90s. When it was made there were still issues in society with race, gender, and politics which the film doesn’t really tackle. However in the film part of Cher’s arc is that she becomes more socially aware: listening to her environmentalist teacher, volunteering at donation centers etc. so there definitely would be room in a modern film for her to get involved with similar issues in the same way. In an America where a female candidate has just lost an election to a brazen misogynist, it might be good to examine how that makes young women feel. The film also tries to portray a diverse high school clique with some of Cher’s friends from different ethnic backgrounds and one of them being gay. However, in the modern day, it would be good to have Cher address her privilege – not just her wealth and popularity, which the film already does – but her privilege as a straight, white woman and examine some of the issues her friends face. Something the film was good at was predicting how we would use technology so if it was made today it would be interesting to see what new predications it might have. In terms of fashion, in recent years there has been more of a move towards gender neutral fashion so it would be interesting to see what Cher’s views on that would be!

The next MA Fashion Cultures event will take place on Thursday 27 April at LCF, where students will be screening a James Bond film. The screening will be followed by a panel discussion with LCF’s Pamela Church-Gibson, a reader in Cultural and Historical studies, as well as course leader for MA Fashion Cultures: Fashion and Film and editor for Film, Fashion, and Consumption. Joining her will be Llewella Chapman, film historian and Ph.D. candidate at the University of East Anglia, who is currently writing a book on Bond films and has previously had work published on fashion promotion in the franchise.