Dress as though your life depends on it or don’t bother.

Leigh Bowery - Tell them I've gone to Papua New Guinea is an exhibition that celebrates the legendary art and life of Leigh Bowery. Born in the small Australian working-class town of Sunshine, Leigh moved to London in October 1980. At the age of nineteen he was on a quest for self-expression as well as international fame and recognition. Leigh quickly established himself as an absolute icon in the alternative London nightlife scene, managing to metamorphose, not without turmoil, into a living work of art. His unstoppable creativity and unconventional mind revolutionised the world of fashion, art, dance, nightclubbing and beyond. His outrageous performances, mind-blowing face and body paint, and revolutionary looks have inspired generations of creatives, club kids, gender-benders and artists from all over the world. 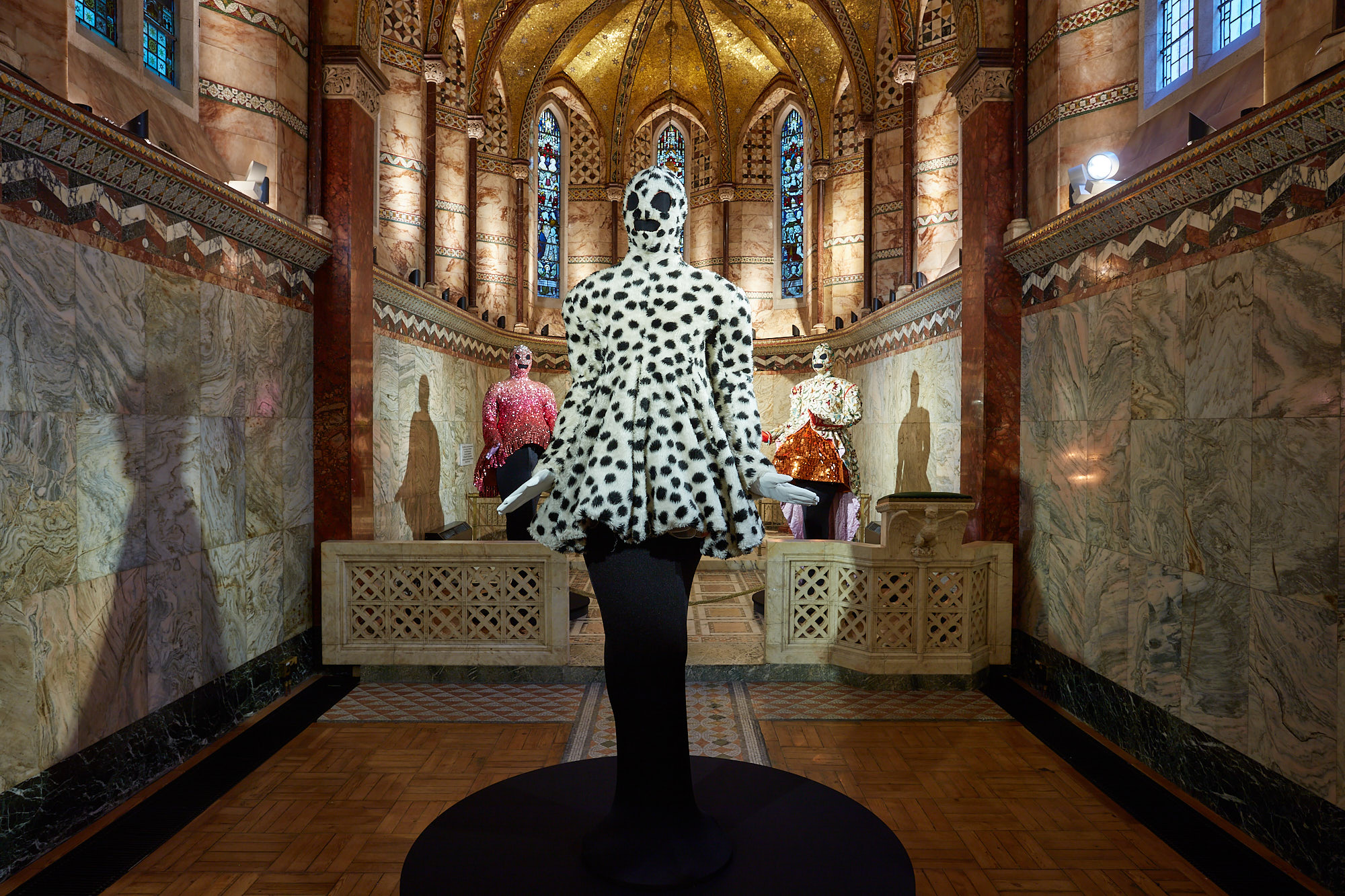 The exhibition is staged at the Fitzrovia Chapel in London, the only remaining building of the demolished Middlesex Hospital where Leigh died of complications from AIDS on New Year’s Eve 1994. He was only thirty-three years old. The chapel, with its shimmering gold mosaic ceilings and glossy marble walls, is the marvellous backdrop to seven of the most iconic costumes Leigh designed, created and twirled around London during the 1980s and early 1990s. Moreover, the exhibition presents a specially produced short film in which Nicola Bateman, Sue Tilley, Boy George, Les Child, Richard Torry, David Holah and Lee Benjamin, his closest friends and trusted collaborators, and Dr Rob Miller, who treated Leigh before his death, talk about his ground-breaking work as an artist. Most importantly, however, the interviewees offer tender insights into his private life and funny anecdotes about his quick wit and extravagant sense of humour, portraying the human soul of this almost extra-terrestrial character. 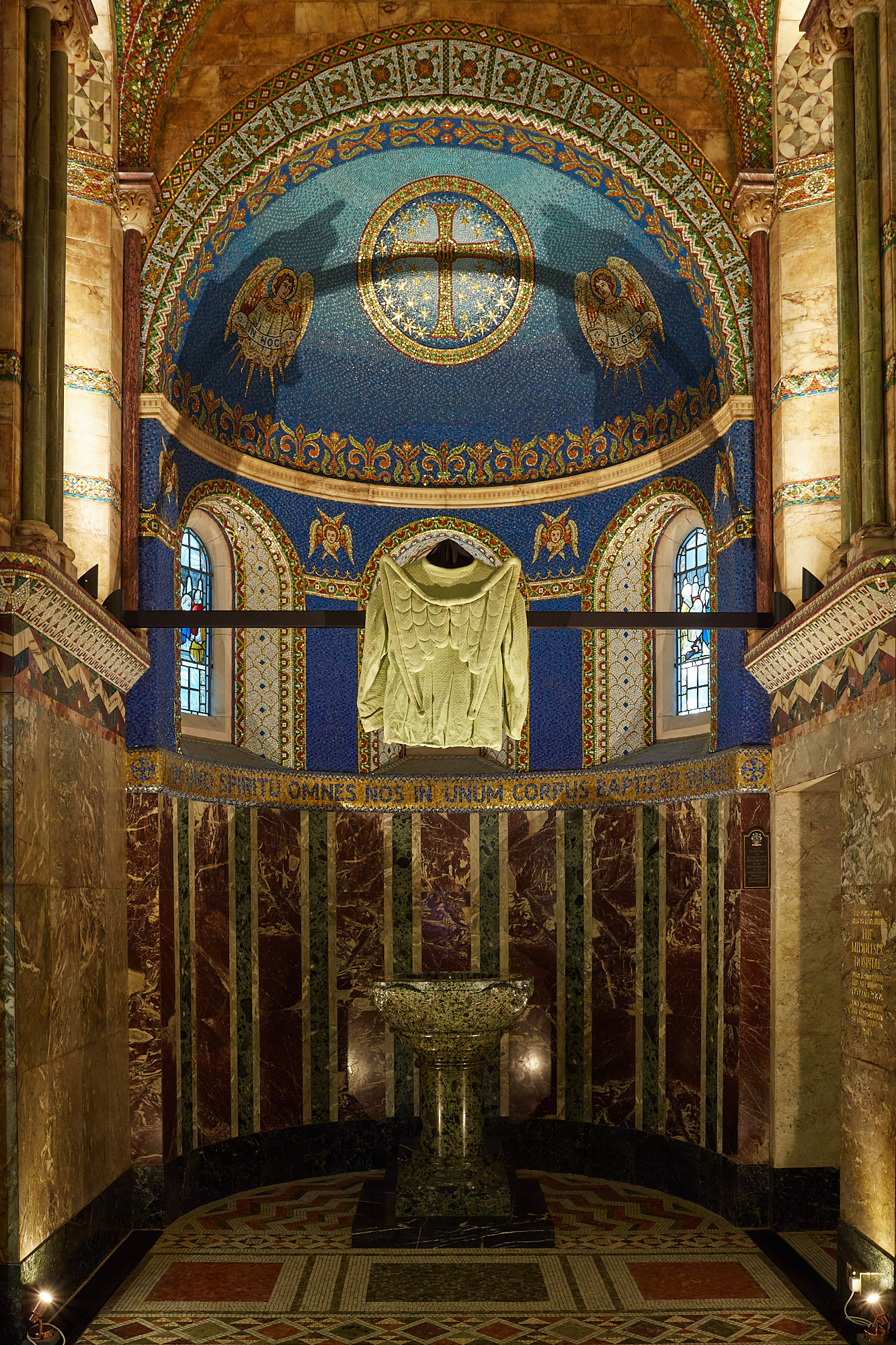 In the quiet of the Chapel, the exhibition offers an intimate look at Leigh’s costumes. The display allows the viewer to get closer to these unique works of art, appreciate their highly ornate details, get blinded by the thousands of sequins that embellish them, and admire the technical excellence of the designs. One can even spot original traces of “disco dirt” here and there. These elements have been intentionally preserved and included in the exhibition’s narrative. The visible signs of wear, the make-up remnants and the unspecified stains on the costumes outlived the wearer and have become explicit evidence of his outrageous nocturnal existence, made up of nights out, loud music, unrelenting dances and gallery performances. The costumes include examples of the notorious heavily-sequined “fabric face” looks from the 1980s, a pale green Angel outfit with detachable wings, and the velveteen “Fraggle Rock” (1992), which is one of his most abstract pieces (in the 1990s Leigh experimented with shifting the body into a more sculptural shape while playing with proportion and distortion). The exhibition’s team worked with the Leigh Bowery Estate on the selection of the costumes and in particular with Nicola Bateman, Leigh’s friend, assistant and wife. The installation of the exhibition required an accurate study of Leigh’s figure and of his unique way of live-staging his looks for the viewer. The display raised many questions about how accurate the transition from the real body to a mannequin should be and how best to translate the presence of the artist to the Chapel without being able to include movement and make-up (for conservation reasons).

The mannequins' bases feature abstracted outlines of a black silhouette drawn from some of Leigh's poses, documented in photographer Fergus Greers imagery. The positions of the mannequins recall the artist’s most typical gestures and demeanour. The preparation of the mannequins required wadding and padding to recreate Leigh's robust and towering physique. Nicola Bateman would assist with this process, suggesting where to add or remove padding accurately to adjust the mannequins’ shape to Leigh’s proportions. As a graduate of the MA Fashion Curation course at LCF, handling the exhibition’s objects was an incredible process of learning and discovery. Being able to conduct material culture analysis while mounting the costumes on the mannequins allowed us to trace their story: how they were constructed, used, performed and conserved over the years. Working so closely with Nicola Bateman, looking at the way she handles her and Leigh’s creations, and listening to her numerous stories and “behind the scenes” made the process of the installation very touching. Thanks to these testimonies the costumes became more than objects, they came back to life and brought back the larger-than-life presence of Leigh Bowery in the room, demonstrating the fundamental role they play in preserving his memory and legacy.