In this week’s selection, we profile the work of graduates who explore different facets of Identity - from imagined characters brought to life by costume, make-up and prosthetic design, to deep explorations of gender, sexuality, race and cultural identity through the medium of fashion design and fashion image.

Using a diverse spectrum of approaches, graduates critically examine the influence of gender norms, heritage, cultural context and new definitions emerging in virtual environments to offer a diverse range of perspectives on the notion of Identity, presenting it as a source of personal inspiration and a site of creative experimentation and play. - Aleksandra Szymanska - Creative Director for School of Media and Communication.⁠

"I am from an international schooling background and have always been interested in others people’s experiences in different cultures and the diverse perspectives that people hold in their lives as a result. As a stylist, I stuck true to my own visual language by playing with colour, texture, pose and facelessness. I experimented with the idea of veiling with materials from the collection and  subverting the Egyptian plastic bags in order to explore the idea of an alien icon and reflects the mystery in the collection."

The Time Machine - A collaborative project with BA Performance courses

"The Time Machine was a collaborative project based on the H.G. Wells novel. The aim was to modernise the story and find a future setting which was relevant to contemporary audience. Our group took on the Morlock and Eloy to create. Our Project placed the novel in a post nuclear world where the Morlocks were running a dictatorship, and farmed the Eloy for survival. The original story highlighted issues including the gaze, gender and race and therefore our job as a group was to examine and highlight key changes which would make the story diverse, equal and reflect contemporary ideologies."

"My final major project is based on Madonna’s children’s book “The Adventures of Abdi”. Inspired by its illustrations of mysterious snake charmers, curious creatures and heavily robed travelers, I decided to give my wacky spin to the story and make two stop-motion character puppets. Abdi’s character design was inspired by the Berber nomad’s bright blue robes and the desert tortoise. The Snake Charmer’s character design is a cross breed between a sugar beet and the desert plant called Tree Tumbo, shaped to look like the silhouette of an actual snake charmer."

Nights at the Circus - Katherine Lindley BA Hair, Make-up and Prosthetics for Fashion

"For my final major project, I chose to adapt the Angela Carter novel, ‘Nights at the Circus’. The story is set in 1899 and focuses around an unconventional travelling circus. I researched heavily into circus’ and ‘freak shows’ of the time. My designs for the characters were heavily influenced by the themes of the book such as ‘appearance’ and ‘fantasy’. I wanted to elevate the theme of fantasy in order to create animal-human hybrids of these characters, as if they are turning into their roles within the circus. Appearance comes into it because the characters do not want to be turning into these animals and are ashamed of the way they look."

"The Golden Calf is a metaphorical exploration within the contrasting contexts of religion and sexuality and shows the disoriented and questioning status quo after the detachment into a self-determined life. The versatile symbol of the bull illustrates the conflict many people experience growing up gay in a religious and/or straight world. It is about an inner fight between shame and authenticity, and the struggle of overcoming the deeply rooted and built up rage created by shame."

With thanks to - Performed and music by Metaraph

"'I, Unfolded' aims to develop my identity and personality deeply which is extended and unfolded. My inspiration has been drawn from my real life and perception of my life. I would like to build scenes in different locations, incorporating symbols reflecting my personal experience and dreams, summoning a surreal fusing of people, props, architecture and clothing to create fabricated fables."

"Togo Yeye is Ewe and translated to“a new Togo”. I ran this project in collaboration with my friend Malaika who is based in Lomé. This project started with the desire to create a body of work specifically with Togolese creatives as audience in mind. Our aim is to champion Togolese creativity especially in the fashion industry and to strengthen our community through collaboration.We located and collaborated with designers and artists, especially students and graduates from Lomé ́s fashion schools and young artists from the “streetwear”subculture in Lomé. Togo Yeye will be a searchable online directory into the Togolese creative scene and an annually published book which will focus on showcasing up and coming artists." 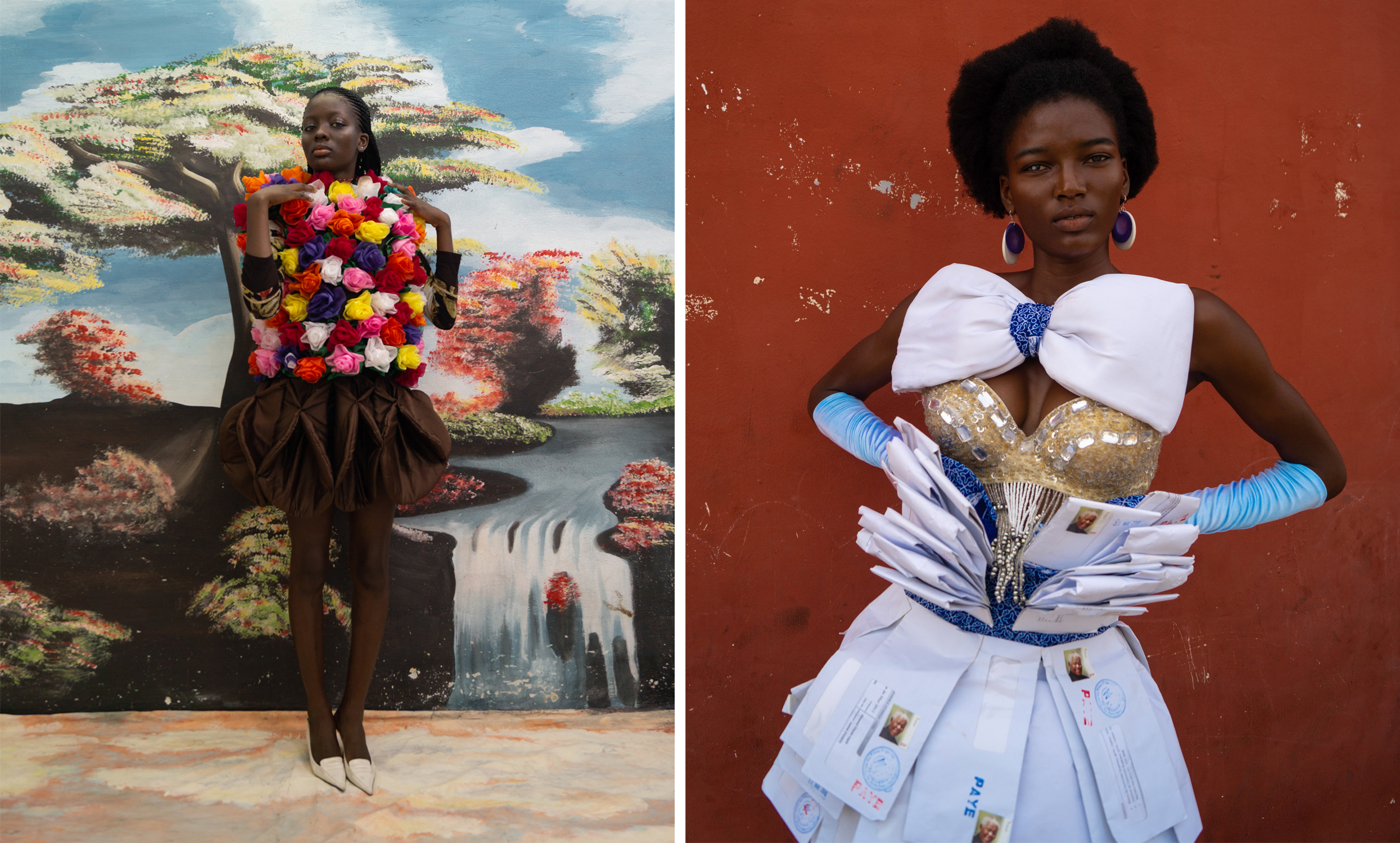 This video depicts my final toiles of my collection named 'THE LIFE CHOSE ME'. The collection explores narratives relative to my livelihood, often looking to previous experiences reflecting childhood and my current livelihood. Tailored through the lens of my Angolan heritage the collection is highly influenced by cultural music, dances, African film, and comedy. Cultural projections of growing in a lower-class London environment is also explored. I was able to meet up with friends locally in order to collect visuals and imagery while maintaining social distancing. The video is compiled of visuals shot on mobile phone which I then worked on post-production to add the livelihood and energy I had experienced in my research.

From the idea of constantly questioning myself throughout my uni life, and trying to express the spirit of 'everyone is special'. I think most people's childhoods are mixed with a deeply rooted inferiority complex, even though you already are the most extraordinary person in someone’s eyes. Abstract the inspiration from the ordinary people overlapping shapes or gestures and trying to find their shining points.

My Surrounding Self - Xinyu Jiang MA Costume Design for Performance

My Surrounding Self is inspired by the male protagonist in the French Left Bank movie La Belle Captive, Michel Foucault’s The History of Madness and Japanese avant-garde artist Yayoi Kusama’s artworks, exploring themes around de-personalisation disorder. It aims to explore our experiences of increasing social pressure through social media and an increase in mental illness. The aim is to explore these topics in a compassionate way with humour, absurdity and optical illusion.

This project looked at the themes of intimacy, and how intimacy, nightlife and sex, within queer relationships can be celebrated and highlighted within the mainstream fashion media. This project uses bold imagery and vibrant colours to create a juxtaposition with visual and feeling. These illustrations are made to be seen by a wide audience and this whole series resulted in outcomes that can be used as prints, videos and advertisements.