In the second week of our LCF Class of 2020 campaign, we present works centred around the theme of the Body. Students we profile this week investigate forms of bodily expression and augmentation through analogue design - garment, costume, make-up, prosthetics and footwear among many others - and through new digital tools that enable to them to question the physicality of the body and to expand its definitions into the virtual realm - Aleksandra Szymanska - Creative Director for School of Media and Communication.⁠

"The main reference for this collection is Sergei Parajanov’s  film ‘The Colour of Pomegranate’. In the film Parajanov created his own independent worldview. The collection was finished during quarantine, so the work expresses an emotion of isolation and silence that being alone. The sculpture figure might be the designer herself. Rather than telling a story to the audience, I would love to hear the story that audience reads from this work as well - the aim of creating is always to make conversation with the audience. The main body of the sculpture consists of recycled copper wire." 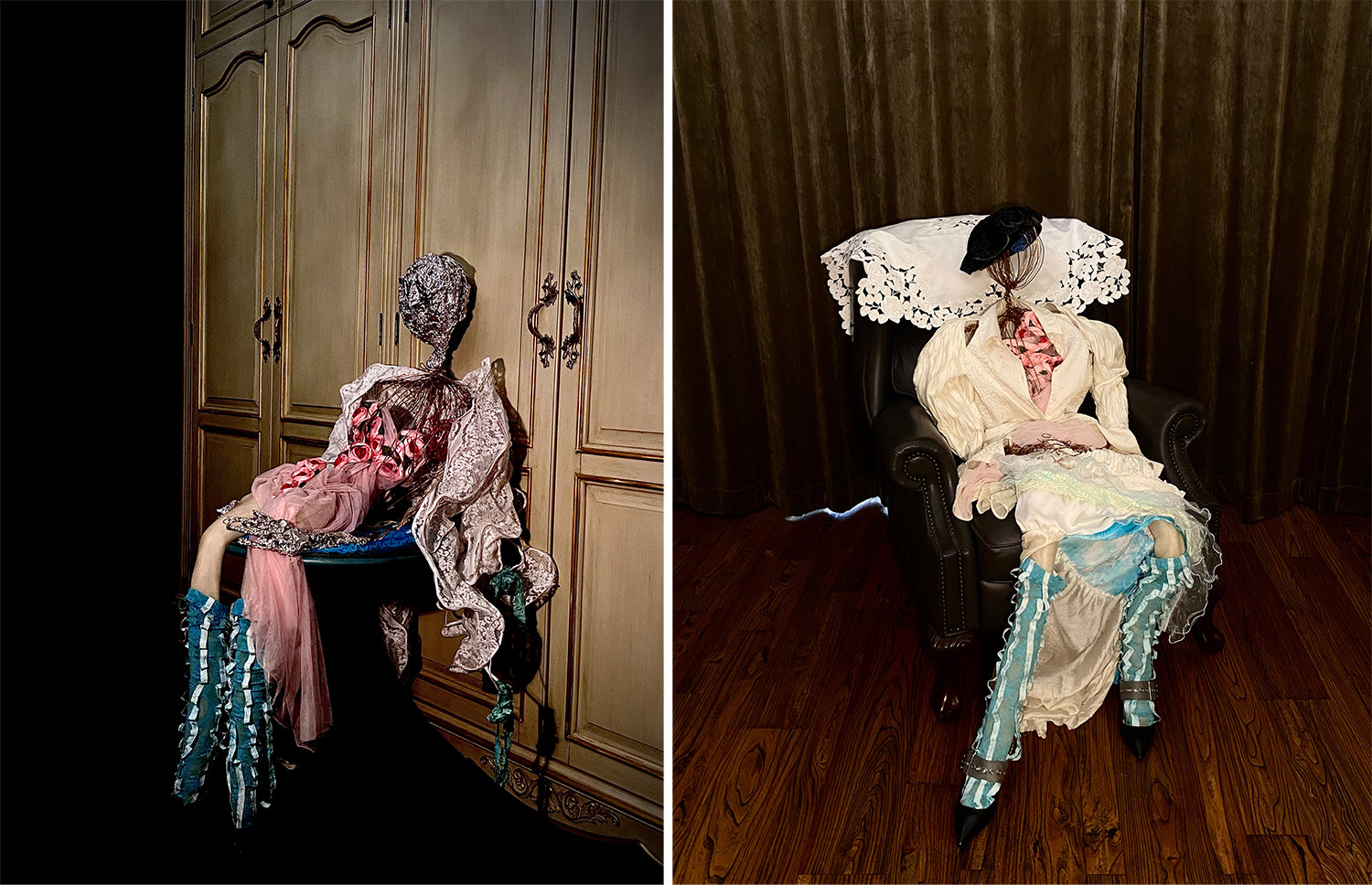 "Character realisation for the transhuman Morlock race, from a collaborative project based on H.G. Wells - The Time Machine. Set in a world submerged in water, the bioluminescent prosthetic sculpt takes references from organic deep sea skeletal systems, H.R Giger and the imagined biomechanics to develop the Morlocks physiology via transhumanism. 7 piece silicone flat moulds. " ⁠

"The name of the collection is called 'Surrealities' and it explores our connection to different personal realities in our head: where we come from, where we are now and what we aim to become in the future. This work is a personal take on the glitch in self-identity that one feels when moving to a metropolis for the first time. I wanted to translate the culture and detailing found in my homeland Romania from a technological point of view: Romanian symbols become 3D printed embroidery and the model is replaced by a robot."⁠ 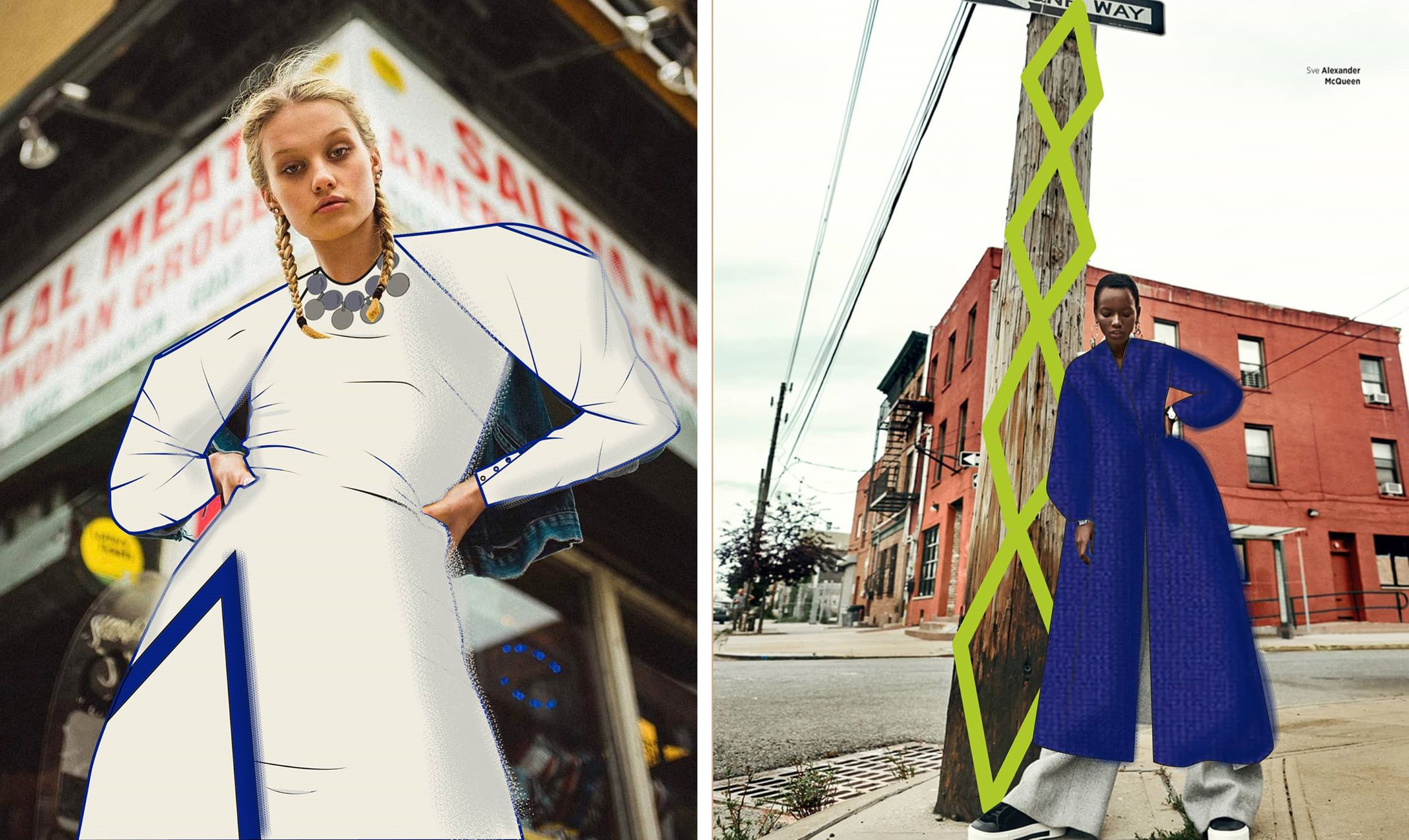 "The inspiration behind this photoshoot was Mugler’s images captured in the 80’s, all images had a palette of blue and red and looked very sci fi/ futuristic. I interpreted this in my own way and shot this advertorial for designer Jivomir Domoustchiev, it is one of my favourite shoots to date." ⁠⠀ 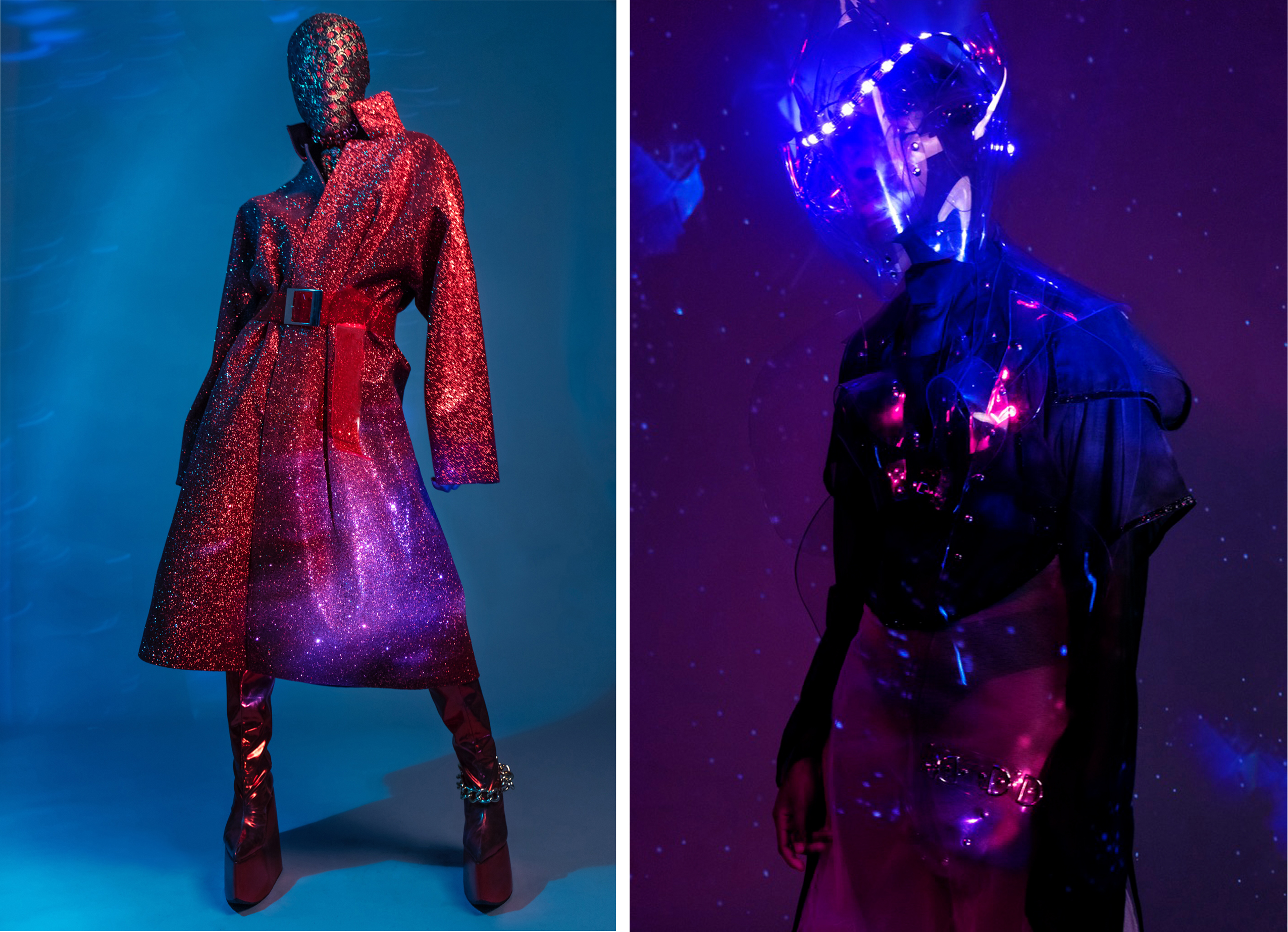 "The Polyphony project is created to seek the possibility of spatial engagement in the virtual space. It is an indulgence of fetishism, gay mythology and phonographic scenarios in the materialised world." "This project comprises of three parts, a range of garment and textile works that critically emphasise the impact of the fast-paced life in modern society on people. Stairways serve as a symbol representing part of the modern embodiment, stairs are often used to symbolise rank.The patterns of tie dye unfold and extend in the water, giving a soft and comfortable visual experience in contrast to the beautiful things that people miss when they go up and down by the stairs. The garment part represents more possibilities and the things lost in the process of people climbing to the highest point. Some pointless effort to achieve so-called success. So what did people lose in the process? The project calls for people to slow down and find more possibilities in their lives."

"Based on Dazed Beauty aesthetic, I created a project around the theme of metamorphosis. I decided to go for the way Dazed beauty manage to elevate the idea of beauty to a whole new level." ⁠Watch the full video.

"Out Of Step is an online platform discussing dance and fashion in such a way that people from either art form feel able to interact with the other. It aims to produce content that informs and entertains its readers, while also opening their minds to different topics they may feel excluded from, for example, dancers towards fashion-related content. It is essential to Out Of Step to include all aspects of dance and drip fashion into it. Articles range from talking to famous ballerinas who are pushing boundaries and stereotypes in the industry to a 'night out with OOS..' portion."⁠

"In this project, ‘SURREALISM’, I was inspired by surrealist painter Salvador Dali. I really like how the final images have a creepy feel to them. The focus of the shoot was definitely the hair and make up. The eyes are the windows to the soul and without them we are unable to free our consciousness." "Ominous Ø means to visually represent a thorough exploration of the human figure and its relation within space. Looking at both dark and light through a series of physical and digital distortions, Ominous Ø accompanies the audience in a trip through the inner-self. Born as an introspective work, Ominous Ø, through a raw and brutal low-tech aesthetic, aims to analyse the construction and deconstruction of the human body ended up creating an intimate bond with the subconscious of the audience and the figure represented." Watch the full video.

"My final collection is about utility, strength and femininity. It is inspired by strong soviet women as well as creeper plants taking over everything humans have created. Nature is such a powerful force. The footwear in the picture is actually my failed mock up of a design I was not able to actually make. I was so ready to “throw it into the bush” (an Estonian idiom). But just like everyone graduating in 2020 in these strange times, you have to make most of what you have."⁠

"Paradise Islands’ is a Cruise 2021 collection that tells the story of a British boy and his journey to Sri Lanka where he finds himself. A young British Asian boy whose curiosity and love for adventure is always piqued. Upon his trip to Sri Lanka, it takes him through the unknown and unexplored world. A place where he feels he has been reborn. A place that drew him closer to the side of him he never knew. And a place that has made him appreciate who he really is."