Final year student Emily Hill came third in the 2019 Cordwainers National Footwear Student of the Year Competition which is open to students on Cordwainers courses at London College of Fashion, De Montfort and Northampton universities. Ahead of her work being shown in the LCF19 exhibition at Here East on Friday 19 July, Emily shares her thoughts on the experience and how it has affected her career plans, as well as offering advice for future applicants.

Congratulations! How did you find the experience?
It was quite difficult because it was way before our final project deadline which meant I had to do a lot of work in advance. But then I got nominated and came third on the night which was really good! 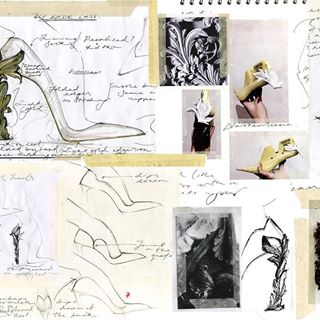 What inspired you to enter?
In the footwear industry it’s quite a prestigious award which is really the main reason.

What are you planning to do with your £1000 prize fund?
I’m not sure yet. I’m probably gonna have to put some of it towards living in London while I find a job – which is still a good way to spend it.

What did you submit to the competition?
A smaller version of my final portfolio. A lot of drawings, sketchbook pages, research pages and design development. And then final designs, specification sheets and all of the CAD drawings.

Is there anything you’re working on at the moment?
(Referring to the Old Truman Brewery Grad Showcase) this has been the big project. I’ve also applied for a couple of jobs and they ask for particular tasks, so had a couple of manic weeks producing a project in a few days! But I like having things to do, having worked with Zara (on placement) last year. I like working very hard, but I’m gonna have a break after this is over.

How did you come to specialise in footwear?
I always wanted to do this. My mum’s an architect designer and I was interested in art and design. From a really early age I was also interested in shoes, and turning things around the house into shoes by drawing them. When I was 10 I wrote to Manolo Blahnik and sent in some of my designs! I just always wanted to do it. Then a shoe designer moved into the house nearby – I live in Lancashire in the middle of nowhere and there’s two houses on the farm. In the other house was a shoe designer, it was like serendipity! So really just a long-term interest in shoes, they’re really very beautiful.

How has the award affected your future career plans?
Quite well – I don’t have a job yet but it’s a very big point of interest. People say “I noticed you got the award, tell me about that”. So it’s a good talking point and people in the industry know about it, so to say you’ve got it is really good!
What advice would you give to any student thinking of applying next year?
Just to be as creative as possible, because it’s a way showing bits of yourself. The actual award ceremony is really exciting. You exhibit all your work and there’s a private viewing for industry and the people you talk to there are really brilliant. Be as creative as possible and be true to yourself and your own ideas. With this project I did for final year it’s everything I love, and it just made sense for me to do it because I didn’t get bored of it. So be true to yourself in the most creative way possible.