Final year BA (Hons) Costume for Performance student Sanya Torkmorad-Jozavi was selected as a finalist in the World of Wearable Arts Awards (WOW) and the young designer saw her work come to life on stage at the WOW Awards show in New Zealand earlier this year. The WOW Awards is a theatrical spectacle with an audience of nearly 50,000 and Sanya was supported by the college to go to New Zealand and see it all happen. The young artist told us about her trip…

LCF News: Tell us about your design…

STJ: The costume I made, Modern Persian Woman, was in response to the WETA Workshop (a design studio which makes incredible pieces for the entertainment industry worldwide), “Costume & Film Kingdoms of the East”. I stretched the title a bit further than East, looking at Middle Eastern Kingdoms but it seemed to work!

It was inspired by my own Persian heritage, and I wanted to create a female warrior, instead of the usual male one. My concept was to explore the way the rich culture and power of the Persian empire was overshadowed by the corruption of the Iranian Revolution and how Iran’s glory days have been forgotten due to the Islamic rule that came from the revolution. My character is presented as a woman trying to fight against the current struggles inflicted on her.

LCF News: What opportunities did being a finalist at the awards give you?

STJ: It offered me the chance to speak to designers from around the world, from USA to India to Europe. I saw my work on stage for the first time and WOW want to keep it to display in exhibition –  it all gets my name out as a young designer amongst working professionals. It was so exciting seeing my piece in the program. It’s such a celebrated awards that I hear is touring USA soon.

LCF News: What were your highlights of the trip to New Zealand?

LCF News: How did LCF support you? Who helped you make it to the finals?

STJ: Being granted the Travel Award to go and represent this university where I’ve been taught the skills needed to design and make my piece in the first place was great. I felt really supported by LCF.

LCF News: We also hear you attended a WETA workshop – what did you get up to there and what were the highlights?

STJ: We got to go to Roxy Cinema, an old cinema that got restored by Peter Jackson. They talked us through what they were all about at WETA and we got to get close up to top secret new costumes for an upcoming film. After WETA spoke to us, we got taken to Massey University which was really impressive, seeing the resources the students have in a beautiful setting was cool.

LCF News: How do you think your course helped prepare you?

STJ: Number one: how to sew. I remember whilst making my costumes I kept jumping back to all my notes from previous projects. I winged a lot of it of course, tried a lot of new methods that I don’t think I would have the confidence to try if it wasn’t for the BA (Hons) Costume for Performance. Realising a design idea, from research and designing to making it tapped back into everything I’d learnt on the course. 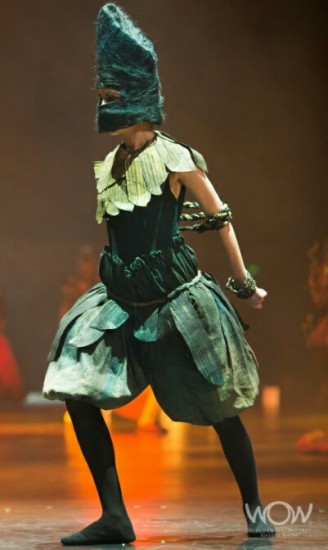 LCF News: What inspires you in your creative work?

STJ: Being in costume, you have to be able to respond to a brief, a text or concept. So the ability to be inspired by something out of your control comes down to research. I love delving into a topic and messing with the connotations related to its norm. My passion comes from a love and respect for art and design that just pushes me to do it justice. It’s hard to say because I can be inspired by anything and everything, it’s the way in which I approach it that matters. I always approach my work with a contemporary influence, aiming to be original. I’m confident in pushing what’s acceptable, and there’s an element of seeing if I can get away with it!

LCF News: What do you think you learnt from the whole WOW experience?

STJ: I had to dig deep and realise that I was capable of more than I thought I could do. When I started the whole process I had a deadline at Uni, a work placement, a part-time job and was living away from home, but I still pulled it off well enough to make to to the finals. It taught me to just say yes to every opportunity you get to be creative, and have confidence in your abilities. Oh and that I really want to go back to New Zealand!

Sanya has now seen her work selected for the Visual Delights exhibition from May 2015 until November 2015.