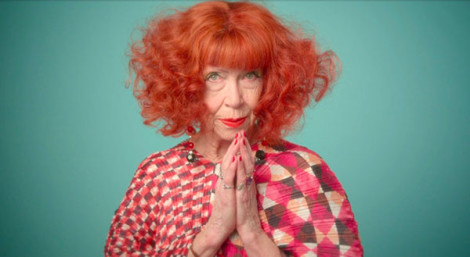 Still from ‘A Change is a Beautiful Thing’ by Kathryn Ferguson for Selfridges. Image: myaccomplice.co.uk

The partnership comes after Kathryn’s successful “Four Tell” film for Selfridges, a sartorial ode to female role models which was released on International Women’s Day 2013, and her more recent four part film series on modern beauty for Selfridges’ “The Beauty Project” which was screened in-store and online in May and June 2014.

In the past, Kathryn has made films for fashion designers, brands and musicians including Chloé, Selfridges, Sinead O’Connor, Lady Gaga, Richard Nicoll, SHOWstudio, Charlie Le Mindu, Katie Eary, and Domino Records. These films have been featured on MTV, Nowness, Dazed Digital, Twin, the BBC and in Vogue.

Her experimental film work has been selected for film festivals, screenings and group shows around the world including OneDotZero, Aesthetica Film Festival, the 59th Berlinale, the V&A, the Pompidou Centre, ASVOFF, and Birds Eye View Film Festival at the BFI.

Throughout 2015/16 Kathryn will work closely with the existing creative and digital teams; researching, writing and directing short form video content to be distributed on a combination of digital platforms.

“I’m excited to help expand Selfridges’ digital film and broadcast content and work closely with the various teams to develop their broadcast strategies. With such a huge pool of creative talent already working regularly with the brand, I am really looking forward to reflecting that within the content we create.”

Kathryn is also featured this month in Saatchi & Saatchi’s exhibition, “There’s a Good Girl” which celebrates the art created by some of the most innovative female artists working in London today.

A big congratulations to Kathryn on her achievements.