Sartorial Stories is a new series of events inspired by the LCF Archive, in which Susanna Cordner (Senior Research Fellow), interviews leading figures from the fashion industry and invites them to bring in one item from their wardrobe or from their work. In the discussion they demonstrate how much an object can represent, and the different ways in which people think about and ‘read’ their clothes, depending on their expertise. Next in this series of events, Fashion Designer Henry Holland, joined Susanna last month.

After studying BA Journalism at London College of Communication, UAL; Henry’s brand, House of Holland, is now in its 13th season and is the embodiment of the London girl aesthetic. Here he talks about the object which sky-rocketed his career… 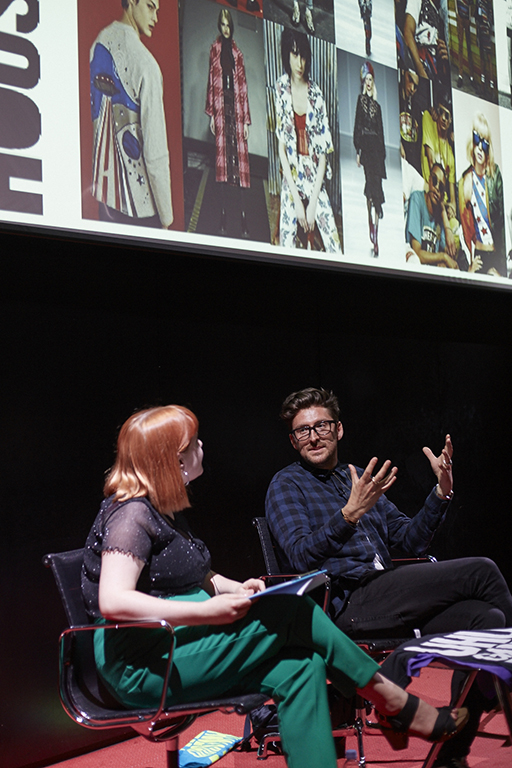 When I very first started my T-Shirt business, I drilled it down to four slogans which were UHU GARETH PUGH, GET YER FREAK ON GILES DEACON, DO ME DAILY CHRISTOPHER BAILEY and CAUSE ME PAIN HEDI SLIMANE. So these are the two; (Giles Deacon and Gareth Pugh).

I’d had this idea about making T-Shirts with fashion designers names on them because they were my rock stars, they were the people I idolised, and I’d just moved to London, bright lights big city, it was so exciting – I didn’t even know there was a fashion scene. So these two particular ones were the ones that started my career in fashion really, because Gareth (Gareth Pugh) was a friend of mine, and I gave them one of each, as I was like it would be rude not to seeing as there name was all over them! And I went to his show (Gareth Pugh) at fashion week and was sat on the floor with my housemates and they were like ‘we just saw Gareth has got one of your T-Shirts on today’, and I was like ‘what?!’ I was panicked the whole time thinking is he going to come out wearing it, and he did and that was literally because he had been in the studio all night and hadn’t had the chance to go home and get changed. The next day I got a call from Giles because he wanted to wear the Gareth Pugh one as sort of like a nod and so he (Giles Deacon) wore this T-Shirt the next night…the next day is when I got the call from Sarah Mower (Fashion Journalist) from American Vogue.

So these two T-shirts here are actually what started my career. This one is actually one of the originals because you can tell I had no idea about branding or anything – the labels are like boarding school name tapes.

In terms of design they’re not like something hugely conceptual but it’s much more about the wording, so when people talk about my transition from journalism to design, I see these as actually being quite transitional because I just bought these T-Shirts and printed some words on them, so actually that’s using quite journalistic skills, creating the slogans which is actually what makes these attractive, obviously the colour palette is a part of that but these pieces are the ones that are right in the middle of those two different worlds.

Objects and the non-trained designer…

I talk about the fact that I didn’t study fashion, I didn’t go to design school quite a bit, as a kind of ignorance is bliss; I never got told how to do anything and I also got told how to not to do anything, so I think I’ve always just done things in a way that I thought was right and I’ve figured out from my mistakes how to move forward. We forget how fearless you are when you’re younger I think, because I just didn’t really give a shit when I did these T-shirts, I was like ‘oh they’re fine, I’ll just go for it,’ then I was astonished when every single person that I actually did T-Shirts about actually thanked me for doing it. These were an authentic love letter to these people, almost like kind of my way of showing my adoration of them. That authenticity behind the approach is what made them resonate with people.

On naming his brand House of Holland…

It’s quite funny. I was working at Smash Hits and I was trying to come up with an idea for this T-shirt brand that I’d had an idea for, and I got a press release in the post for Beyoncé’s clothing line called House of Dereon, and I was like LOL let’s call it House of Holland because she named the house after her grandmother and then it was this joke – let’s call it House of Holland and it just kind of stuck and here we are.

So many things that I’ve talked about tonight are those happy accidents that in hindsight, they seem like really well thought out ideas, because I actually really love the name now because I think it creates this idea of inclusivity and I love working in collaboration with so many different people. I think that openness to collaboration, not professing to being the master of everything, being able to create an entire collection yourself, especially when I hadn’t come from that background. I want to create, with the brand, this inclusive, welcoming world that I want other people to be a part of and want to buy into that and I think the name does actually do that – thank god! Because it was a joke.

When I first started my business, my first office was in Denmark Street in Soho and I lived in Primrose Hill and I was constantly called an east London designer, and I was like ‘this is embarrassing – I’m a total fraud!’ I did succumb to Hackney about six years ago both personally and professionally; we moved everything. There is so much about my work that is still inspired by the area and these T-shirts were born out of, a kind of, club culture…

…when I first moved to London and I found these nightclubs and these parties where all these people were dressing like they were, listening to music that they were and dancing like they were and it was just so inspiring to me and I think the people that live and work in Hackney – it’s just such an eclectic mix of people, it’s why I love London so much. I think Hackney is a microcosm of that and so many people living side-by-side, working, creating – it’s just an amazing place to walk around and copy what people are wearing. You definitely take inspiration from your surroundings.

Turn rejection into motivation – I have always used rejection or criticism as a driving force and as an inspiration – I’m fiercely competitive with myself more than anybody else as well, so for me, being told no is really like a red rag to a bull, and that is my way of being like that’s my next task until that person says yes.

Get experience; go out and try as much as you can – Even if you have an idea of one area in mind of the industry that is for you, I think you should just go and just be really open to experiencing everything because you will learn so much and you’ll start to build a kind of picture of the right place for you.

A T-shirt and designer slogan on Henry’s own name…

Argh – it’s so annoying, because I literally decided on this concept and then realised my name is like orange, orange; neither of my names rhyme with anything! For the first ever show we did ‘WHO NEEDS A HUSBAND I’VE GOT HOUSE OF HOLLAND’ but it’s tenuous, it’s not great. The concept was always about showing my appreciation for others rather than about my own name.