Getting up close to Alexander McQueen pieces with Accessories students 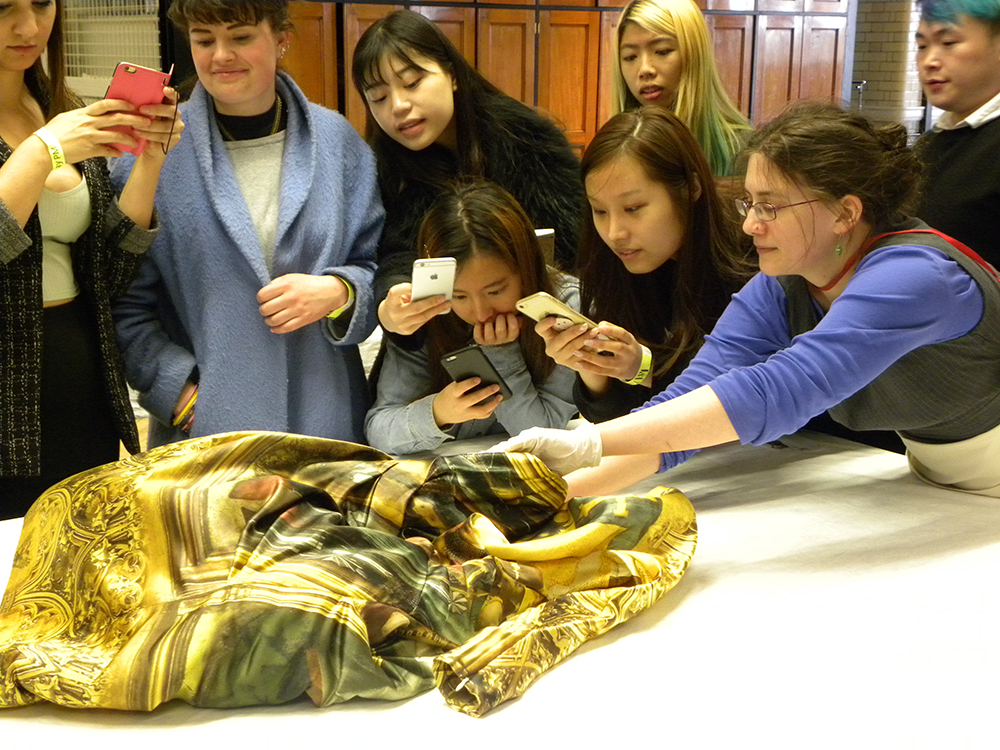 BA (Hons) Cordwainers Fashion Bags and Accessories: Product Design and Innovation students looking over one of the special six pieces by Alexander McQueen

The students viewed, sketched and snapped images of McQueen’s iconic knuckle-duster metallic clutch, butter-soft leather gauntlet and a dramatic gold feathered, Medieval painting print dress. Other awe-inspiring pieces included the animalistic digital printed Plato’s Atlantis dress,bought by the museum on the day of his death; a 1997 pink jumpsuit which showcased McQueen’s outstanding talent for traditional tailoring techniques and The Raffia Dress, a later garment, with a wide funnel neck and asymmetric cut skirt, which showed how these same skills were further developed, pushing the boundaries of shape and form.

A glimpse of the Queen’s jewel encrusted Norman Hartnel gown, ‘Flowers of the Fields of France,’ worn for the State Opening of French Parliament in 1957 added a truly regal flourish to the students brush with Alexander McQueen -the lauded king of British fashion.

The trip to Clothworkers’ Centre was a great honour for the students, not only seeing the McQueen pieces but everything else the archive had to offer. Clothworkers’ House  is home to 54,000 objects, all catalogued alphabetically and everything from six-metre wide tapestries to tiny pins are carefully stored dust bags, boxes and tissue paper for prosperity.

The draping on the stand technique often used by McQueen to create forms unachievable by flat pattern cutting taught us a lesson. It showed that experimentation in 3D often results in unexpected ideas that couldn’t be discovered on paper. That is something we can translate to our bag making skills.