Class of 2016: BA (Hons) 3D Effects for Performance and Fashion

BA (Hons) 3D Effects for Performance and Fashion students work across a broad range of mediums from theatre, film, music and television, as well as more specialised performances such as carnivals and circuses. Students carry out live industry projects every year and students even worked on London’s 2012 Olympic Games opening ceremony.

As part of our LCFBA16 Class of 2016 series LCF News speaks to Tjasha Stroud and Pip Herbst to hear why they wanted to study at LCF, their final major projects and what inspires them. Tjasha: Originally I intending to study classics at university and a series of events changed my path dramatically and led me to my course – thank god!

Pip: Aside from making puppets and props, a huge passion of mine is crochet, and I have an online shop selling my creations!

Tjasha: For my final project I designed a 3D costume with props for two of the characters in the traditional Vietnamese fairy tale ‘Chu Dong Tu And Princess Tien Dung’. I designed it for a film version of the traditional tale that I imagined to be directed by Zhang Yimou. I was inspired by the way Yimou portrays the beauty, ornate and decorative appearance of oriental environments. I wanted to incorporate the fantasy element Yimou immerses into the films he has directed like, ‘House Of Flying Daggers’ and ‘Hero’. I made a detailed ceremonial costume and armour for King Hung Vuong, which would be worn in the final scene of the film. The elaborate design conveys the king’s wealth, whilst the architectural structure of the costume is both intimidating and shows that he would not participate in the fighting himself. The costume consists of an oriental style tunic and trousers, a silk over coat, and traditional mens wooden platformed boots. The armour is made up of a skirt, breast and back plates, shoulder and neck armour, a sash, a belt and a conical hat. The King’s props include a sword, dagger, long claw ring and two medals. The princess’ costume is delicate and feminine to reflect her gentle character. Her costume is made up of a silk full length dress, a batik over layer for the dress, sculpted platform shoes, and a very large circular headpiece. 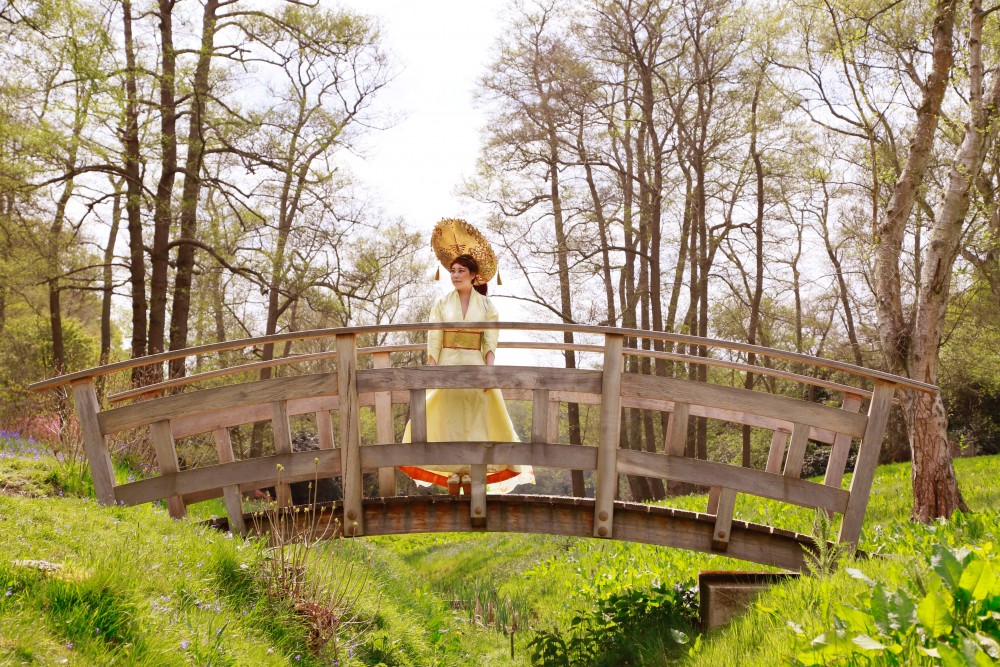 Pip: My final piece is a life sized nude old woman puppet, which is operated by a single person.

Tjasha: I love the fast paced nature of the film industry and the collaborations needed to create a truly spectacular visual creation. The industry challenges you constantly and encourages you to push yourself and your designs. One of the main things I adore about working in special effects or costume/props is how one month you may be working on a futuristic scheme and the next you are designing for a period drama.

Pip: Throughout the course I’ve realised my main passion is to be creating puppets. This is my favorite part of what I do because I love characters and creating something from nothing, a whole being which comes to life.

Tjasha: The fairy tale is set in ancient Vietnam and tells the story of King Hung Vuong and his daughter, Tien Dung. The Princess Tien Dung falls in love with a poor fisherman called Chu Dong Tu and is banished from the kingdom by her father. Princess Tien and Chu Dong Tu leave the palace and travel Vietnam, eventually finding themselves a new palace to rule. The king believes that his daughter plans to overthrow his rule and decides to raise an army against her. Princess Tien Dung prays to the gods to save her new people from her father’s wrath and the gods grant her prayers and conceal her kingdom deep in the marshes, never to be seen again. Pip: My final major project is all about the under representation of ageing and sexuality in our society. It’s based around the text, ‘Still Doing it: The Intimate Lives of Women Over 65‘. Through my research I discovered that many older people (especially women) feel invisible and are seen as asexual, when in reality that isn’t the case. I personally feel this is an issue that needs challenging. Why should someone feel ashamed of their sexuality because of their age?

Tjasha: I used a variety of techniques to display a range of abilities including costume making, leather work, sculpting and casting, 3D printing, laser cutting and woodwork. The variety of techniques needed to create a fully realised character is one of the things I love about my course and industry.

Pip: The puppet was created using various workshop techniques (such as building the inner mechanism) but also some older techniques such as papier mache. The biggest challenge was hand sewing all of her skin from tights as I’m not normally a sewer. I also worked in collaboration with a puppeteer to bring my character to life. 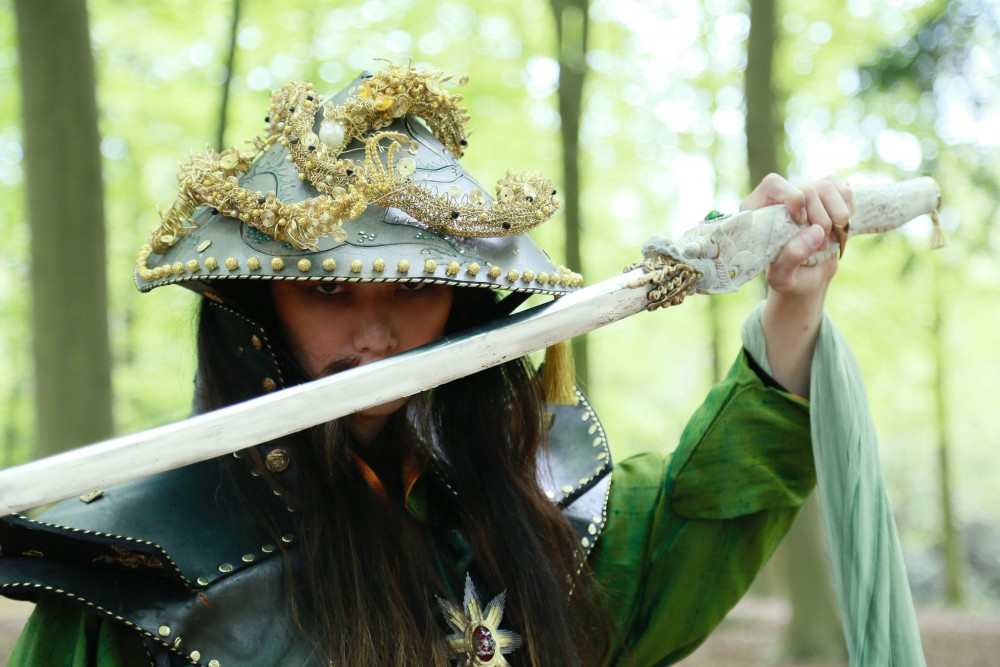 Tjasha: The Lime Grove and John Princes Street sites are incredible. I was able to access a huge range of facilities to aid my work such as the 3D printers, laser cutters, fibre-glassing and plaster studios. My fellow students and I also hugely respect and admire the cultural and historical studies lecturers who inspired our dissertations.

Pip: I think the best thing about LCF is some of the opportunities I’ve had in terms of design freedom making what I want. The tutor contact time is great!

Tjasha: I love the broadness of my course in particular, it has allowed me to experiment with many different potential fields and find my place in the technical effects industry.

Pip: Definitely one of the best things is the support given by the tutors and technicians, as well as all of the people you meet who have the same interest as you. 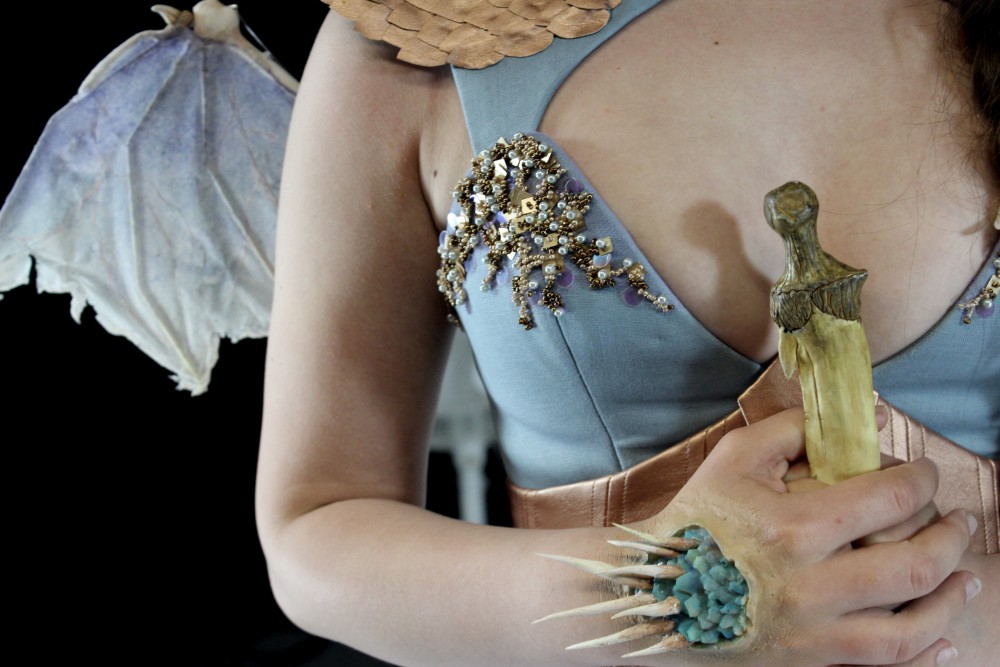 Tjasha: I helped on the recent film The Huntsman poster of Chris Hemsworth.

Tjasha: Yes, I did work experience at BGI –  Loncross studios painting armour and weapons for Guy Richie’s production of Knights of the Round Table: King Arthur. I also did work experience at Shepperton studios in the costume and props department. I worked on The Huntsman making leather armour. I was invited back as a paid trainee designer working in the studio and then on set at Pinewood Studios.

Pip: Yes, in the second year we have a term in which we are expected to go on work placements. I secured mine by emailing many different places that interested me. I went to Hothouse IWG for a month, and throughout the whole 3 years I have also been to BGI supplies, The Lion King, Shakespeare for Kids and worked with an independent designer Sofie Layton. 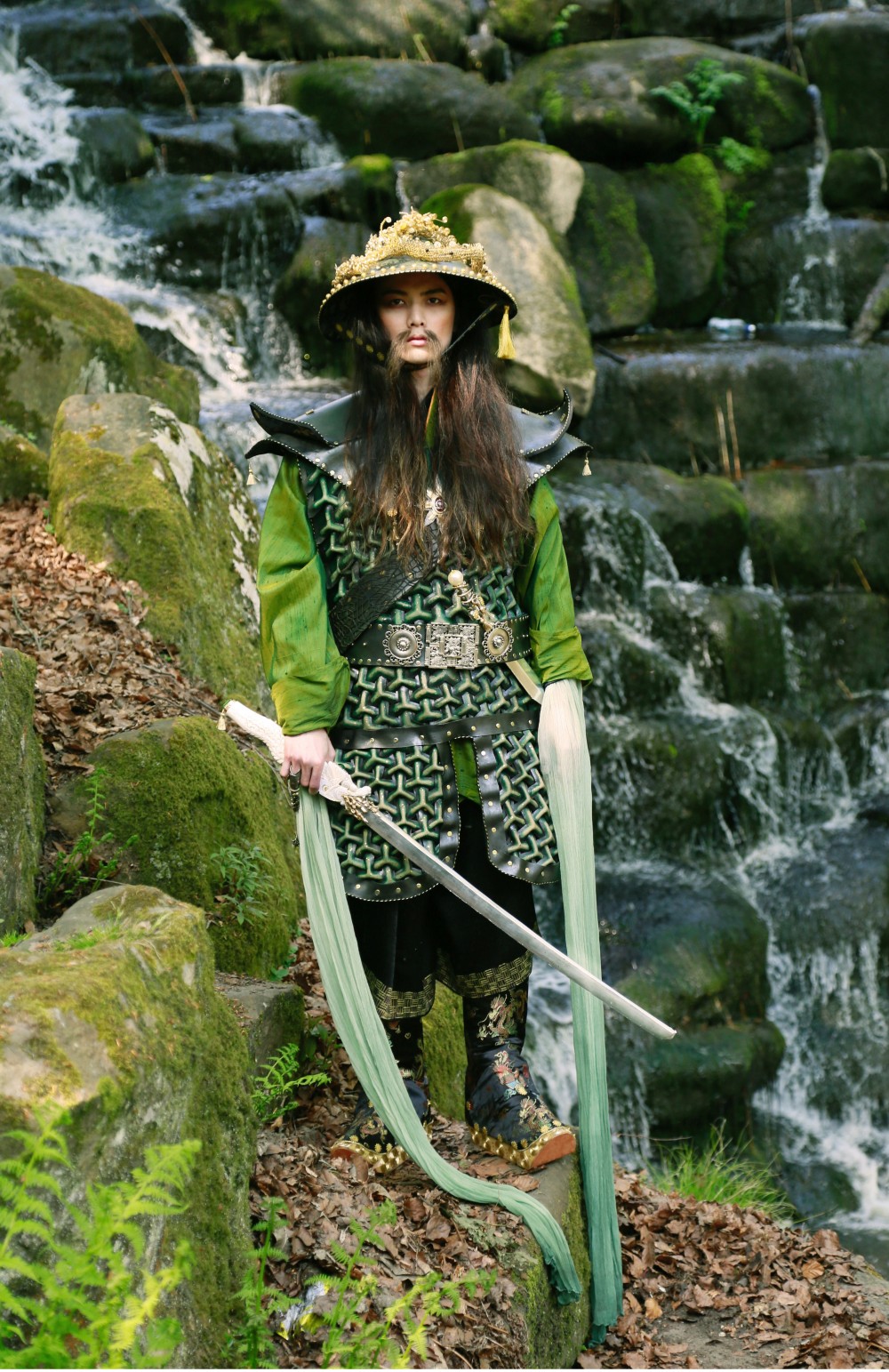 What did you learn on your work experience/placement?

Tjasha: I learned a huge amount during my work experience about how to collaborate with others, leatherwork and armour skills and the hierarchy within a studio.

Pip: Doing several placements gave me an insight into what different sides of the industry are like, as I experienced film work, theatre work, and more independent work. As well as giving me a taste into various parts of the industry I learned a lot of self confidence and new technical skills.

Tjasha: Not guest speakers, I have been inspired by some assisting tutors on my course this year such as Robert Allsopp and Stewart Curran. 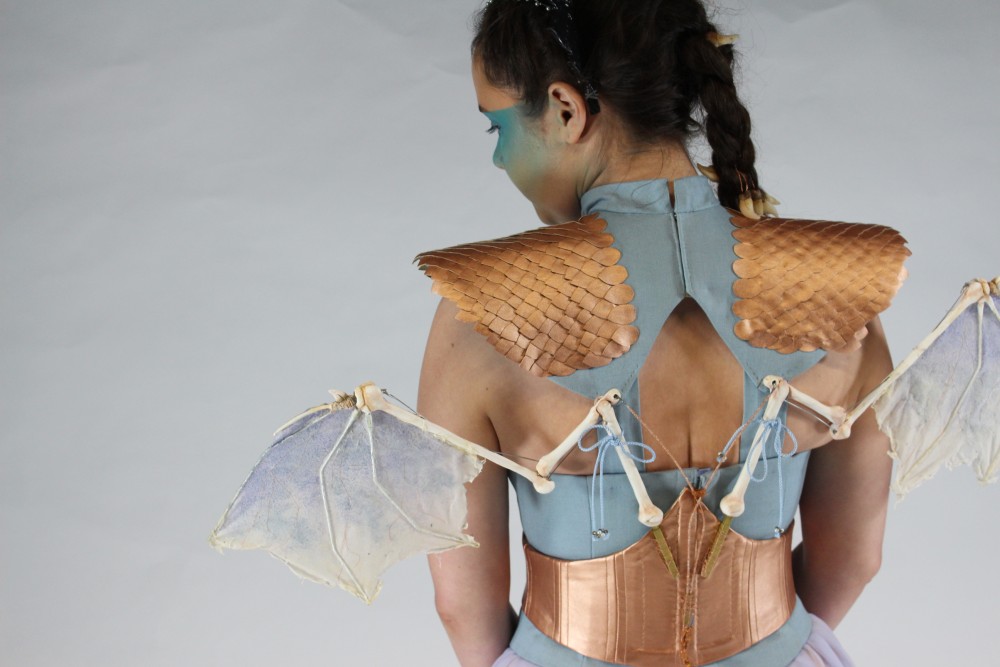 Tjasha: The environment usually, I have taken my inspiration for my final project from Vietnam.

Pip: I don’t know why but whenever I’m asked to come up with my own concept time and time again it is about sexuality in some form. Tjasha: A costume and props designer for film.

Pip: I would love to be creating puppets still, or working in the theatre side of the industry. Another love of mine is art in general so possibly creating paintings, props for performance art, anything like that would keep me happy.

Tjasha: LCF has a good reputation and the name should be encouraging on my CV. My course has also introduced me to members from the industry and made contacts for me.

Pip: I have gained many contacts in my time there, which I’m sure will help me in terms of looking for work. 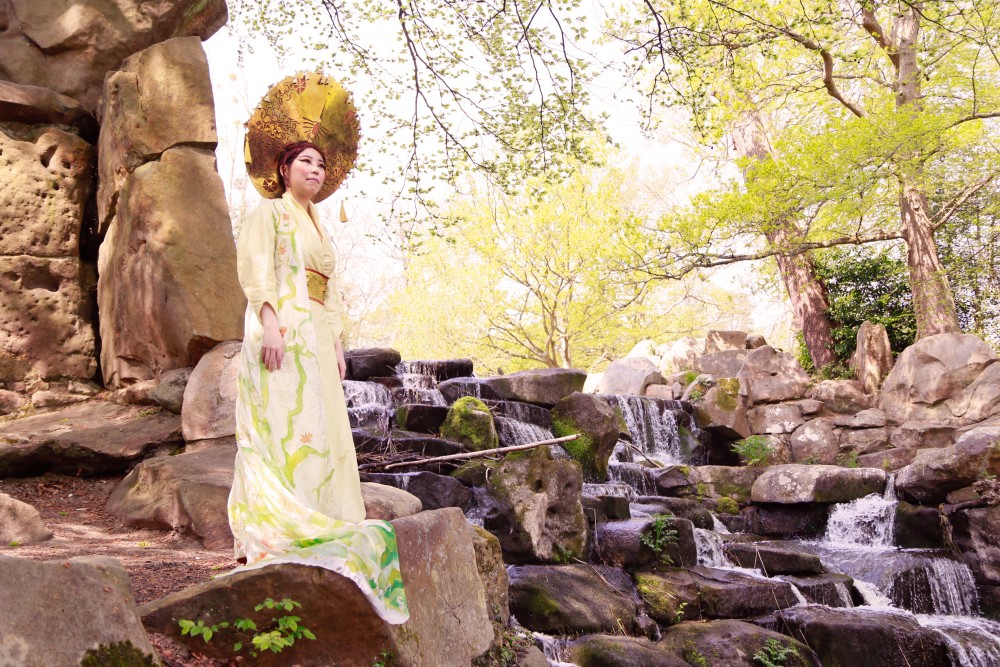 Tjasha: Experiment and have fun, now is the time to make mistakes and learn from them.

Pip: If you really want something, never give up!