Alexandra Shulman on 100 years of Vogue, Brexit and the future of fashion

London College of Fashion played host to Vogue’s Alexandra Shulman this week. The Editor-In-Chief of British Vogue spoke to an audience of students, fashion researchers and Vogue enthusiasts, and discussed her new book Inside Vogue: A Diary of My Hundredth Year, which has just been published by Fig Tree. From Brexit to body types, we got to grips with Shulman’s philosophy on fashion. 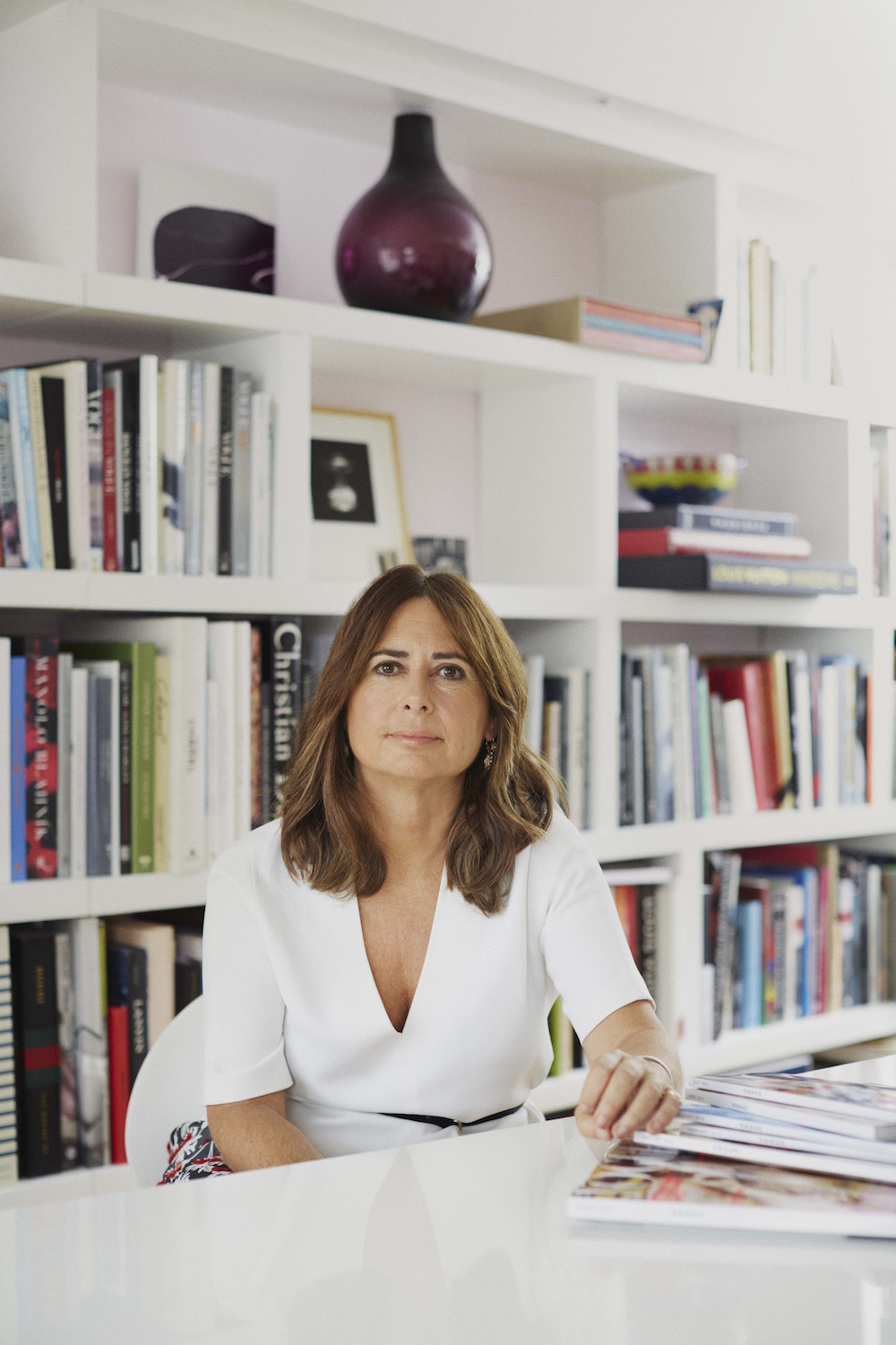 Shulman is not new to authorship, and had penned two novels before sitting down to write her non-fictional memoir about the centenary of Vogue, marked by a retrospective exhibition at the National Portrait Gallery, a festival, an issue cover featuring the Duchess of Cambridge, and a myriad of other events throughout 2015 and 2016. Of this story – her day to day experiences, alongside her work life as Editor-In-Chief of Vogue – Shulman said:

I started it on 2nd September 2015 and finished writing it on the night of the referendum on 23rd June 2016….Brexit had not happened but there were rumbles all the way through the book, of it. It’s only a reflection of one woman’s life through that period. But it’s an honest story. I wanted to show how you would edit a magazine like Vogue, which is obviously very glamorous and interesting, and extreme in many ways, and how you juxtapose that with every day life; in my case the boiler never works so there’s never any hot water in the house, so I don’t have any clothes and the cat gets sick. And to me, what I like about the book the most is that juxtaposition.

The book ends on the day I saw a screening of the documentary Absolutely Fashion. On 23rd June, I saw the documentary, the exhibition travelled to Manchester to be installed there and of course it was the night of the referendum. So it was for me a perfect night to finish the year.

The question of print journalism is, now more than ever, a debated one. In general across publishing, print sales are down, and the digital age has made it possible for anyone to publish, write and critique. When asked if something as solid as Vogue can withhold these challenges, Shulman said:

I have every faith in the printed Vogue existing for a considerable amount of time. It’s a very lucrative magazine, it’s a very treasured magazine. As a physical object it’s something people still value for the thing that it is. I see no reason for that to change. Whether in ten years time will it be published once a month? I don’t know. Will it be the same size? I don’t know. It’s like a tree trunk, it’s the thing that everything else hangs off. If we didn’t have that and just the website and events I think relatively soon things might shrivel away.

As Editor-In-Chief of British Vogue for twenty four years, Shulman has witnessed social change on a colossal scale, and commissioned seminal imagery from those years. But what does she see as her legacy?

I think it’s impossible to see your own work and have any clear idea of how it will be regarded retrospectively. I was interested in that at the exhibition because when I first went to see it – and it was one of the most exciting moments of my life – I was worried that the images that came through my time might not live up to the sixties ones, or the Beaton’s of the fifties. But actually I thought the rooms with work from 1992 onwards, was very strong and powerful and I did think they held their own. I was pleased because I wasn’t sure I’d feel like that.

Shulman’s role is, and should be, to push boundaries without losing readership, but this of course comes with its challenges:

It’s always difficult to know how to increase your audience or shift your boundaries and not alienate the home team, whatever world you work in. What I try and do is different things with each issue, and each issue has a specific idea that attracts some people and other people hate it. So for instance, for this November, it was called the ‘real issue’ and we shot the fashion on people that weren’t models. And some people hated that and said “why shoot fashion on people who are not models. I buy Vogue because I want to see models, not because I want to see charity wearers wearing fashion”. Other people thought it was absolutely wonderful that we did that. My general feeling is that it’s juggling, and you will always alienate some people.

Shulman has been vocal about female body image and diversity in the past, and it has become a significant characteristic of her reign. Here she discusses the latest issue, featuring model and body activist Ashley Graham:

The new December cover features an American called Ashley Graham, who is known as a plus size model, but I hate that term ‘plus size’. I think there will be tons of people who will say ‘why do you want a model like her on the cover’. There will be other people, I’ve already seen on Instagram, people saying ‘it’s so great that you’ve got a different type of body type on the cover’. But it’s quite interesting, because we do research on our covers, and we had two different covers we put into research. And Ashley has got a very beautiful face but she’s big. And one of the images was a long shot, down to mid thigh so you could see her bottom and her waist and her face. And one was cropped to here, and the research far and away preferred the crop shot. So despite people saying they want broader body images, when it came down to it, they actually just preferred the beautiful face. So that was quite a lesson for me.

As fashion is a reflection of, and reactor to, social, economic and political change, often it’s biggest challenges are those faced globally, defined by Shulman right now as the unstable global economy and the digital age:

Fashion has challenges, like all industries. I think the fact that the very fast moving growth of digital is both a challenge and an opportunity. A lot of brands within the industry are struggling slightly to work out how they should be using it, what are the best mechanisms for them and how to interact with social media. I have a feeling that you can’t do everything. And i think people are finding that there is a lot of money and resources having to be put into testing out different things, that can be difficult to provide.

I think we’re also living in a world where china had this huge growth which has now slowed down, and there was a lot of expectation built on that, which has now flatlined. In this country we’ve got Brexit, and we simply don’t know what that’s going to mean. So I think the general political climate at the moment is tricky. There’s a lack of certainty within businesses. Which isn’t helpful when they’re trying to grow. Those are the most pressing problems at the moment.

The mood of fashion is mercurial and its structure is being challenged in the current climate, so one student asked Shulman how she thinks it can be defined right now:

Fashion, from my point of view is about imagery, and the images we create. It’s been interesting to see that there’s been a big sea change in the last couple of years in that. I’ve been quite intrigued to see, for instance, that brand advertising looks very different now to the way it did a few years ago.

The fashion industry is definitely on a wave of realism that slightly mimics what happened when I first came to Vogue, which was when grunge happened. There’s a feeling of looking for a kind of authenticity. I’m interested in the whole Soviet style, kind of eighties, eastern European appeal that’s going on. I think there’s lots of ideas there that people are exploring and I have a gut feeling that actually what’s happening now with Brexit and everything will throw up, both in fashion and the arts in general, some quite interesting creativity. Because there are a lot of questions that people are asking and that’s often a time when in fact you get the most exciting new things coming up.

It’s a very people-based industry, so obviously meeting them and talking to them and relating to people is very important. And being part of a team is very important and people think that you really have to be the best person no matter what it takes. But when people who have come into do work experience it’s the people who have worked with others, collaboratively, have been in the end the ones we’ve given the job to. Rather than the star who has come in and you can kind of see they’re good but you can’t see how they’re going to fit into the workplace.

And the question on many of the audience’s lips – how to get work experience at Vogue?

We have a really fantastic work experience programme. My Managing Editor Frances Bentley has turned it into a kind of second career, organising our work experience, but more importantly really putting time into that experience people have, and also following up. So it has almost become the school of Frances Bentley – people come to her and say ‘Fran, do you have work experience people you can recommend because we’re looking for something’, so it’s a really really good programme that she puts together. You apply online, and by writing to her and explaining why you would like to come to Vogue.

Shulman herself highlighted how lucky she was to be the guardian of such an incredible platform that reflects and honours the times. And it was a fantastic opportunity for LCF students to garner first hand insights.