The project marks the first collaboration between MA Material Futures and MA Art and Science. Set the brief of “Biodesign and the Anthropocene”, the student groups created projects that probed the potentials of biology and design to create a more sustainable future. The resulting project were wide ranging but only one could be selected to go to represent Central Saint Martins at the Biodesign Challenge in New York.

Eating the heavy metals on the ground, the worms become biological producers of quantum dots, a material used in nano-technology for photo-voltaic cells. Visiting a disused mine in south Wales, Bargman and Cutler began to piece together Quantworm Industries System where mining communities could be recast as quantum dot farms in which worms convert toxic ground into useful material. Current quantum dot production uses raw toxic materials and is not particularly sustainable; Cutler and Bargman’s proposed production line is not only natural, it reverses damage done to the ground through decades of heavy industry.

We made a conscious decision to do something different. We’re creating all these new things and new projects but what about what’s being left behind? Biodesign doesn’t happen in a vacuum, it can’t simply be petri dishes in tall buildings. We work in a world in which there’s already cultures and contexts and that became important in this project, to repurpose what’s already there, to turn that to our collective advantage.”

With their project ready, the two headed (complete with hard hats and miners’ overalls) to MoMA in New York to present Quantworm Industries System at the Biodesign Challenge. After impressive competition from over 20 other universities across the globe, the Central Saint Martins duo took the top spot. 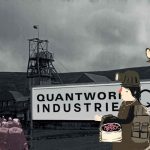 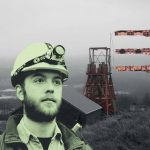 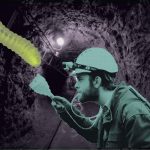 Carole Collet, Professor in Design for Sustainable Futures and Founder/Director of the Design & Living Systems Lab at Central Saint Martins, is thrilled with the outcome of the challenge:

After fifteen years of working across design and science and implementing design-led STEM initiatives, it is great to see how a new generation of creative students can embrace complex biological scientific research principles and translate them into real world propositions that address key environmental challenges. MA Material Futures is unique in the world and this project upholds the course’s ethos of original and inventive biodesign.”