Underline: Jenny Hayton on designing for the Underground

As part of Underline, a celebration of the Victoria line’s 50th anniversary, CSM’s Jenny Hayton was asked to design costumes for London Sinfonietta musicians performing specially commissioned music in a number of Victoria line stations.

Titled ‘We Happened To Travel’, the composer was Matt Rogers and the project also involved graphic design studio Fraser Muggeridge, free to download field recordings and an installation of modified sounds of station equipment. We asked Jenny, who is CSM’s Costume Technician, to take us on a journey through the inspirations and ideas behind her designs.

I’ve worked for Art on the Underground before, on a previous project called Underground Heroes. I worked with a youth group called Fairbridge to create their own personas with the National Portrait Gallery. We created massive portraits of the young people and staff looking at how they wanted to be perceived, in collaboration with the manga artist David Blandy. The show’s curator then invited me to be part of this commission.

I initially had a conversation with Matt Rogers about how he’d been working with recordings and sounds and the details of everyday travelling. I’d just done a project based on sound, so it was quite easy to have those conversations with him, about how I would visualise what I wanted to represent about journeying on the Victoria Line. I had quite an open brief so I could have these conversations with Matt, and pick up on ideas concerning displacement, journeying, and the everyday.

I did my own journeys on the Victoria line in great detail, recording everything. The unique part of the Victoria line is that when it was designed originally, each station has its own identity within a tile design. It’s something that’s there all the time, but it’s almost invisible; when you talk to people who travel on that journey a lot it’s quite often they haven’t noticed it. I wanted to highlight something that was there, and to then displace that onto the bodies of the performers. I photographed sections of the designs and then manipulated that onto the body in scale and in different ways. Not just representing it, but reappropriating it as well, so you can look again and be reminded of the tiles.

Working around the instruments

I met with the performers to gain an understanding of the different instruments that would be used in the performances. I had to consider the designs in terms of their physicality, their silhouette and the space they would take up. I wanted to make the costumes have a physical sense so they had a presence, but also I didn’t want the performers to trip over anything. I took into account what they needed and also there was the really simple thing of considering the placement of a design on a garment, so it wouldn’t be obscured by a giant cello.

People listen to music all the time on the Tube: on headphones and through hearing buskers. I was interested in the fact that you might hear the performer before you see them, or you might see them from a distance, or you might also see them really close up. You’ve got this relationship between sound and visual image and a challenge of how to make something standout within that environment. They were the things I was looking at when I was journeying, and also the kind of textures that I wanted to represent in the costumes.

The stations were chosen very specifically. At Euston there was a flute player and so it had that kind of energy and frenetic to it. Walthamstow bus station was quite exposing and the performer was wearing a bright orange suit, with the Walthamstow tile pattern creeping over it. I wanted him to look like his instrument was blending onto his body. Then of course you have an audience on the buses, and groups of young lads. Suddenly there was a sense of calm in this quite hectic space, and then things kind of stood out, things that you couldn’t predict.

So people have come specifically to see it, programmed it into their day, or people who have come to London for the weekend and see it. You have the passing passengers that stop and wait and watch. That in itself has been really interesting, the different spaces have accommodated different types of viewing and listening. Last weekend at Highbury & Islington there was an Arsenal football match on, so that was a completely different mass of people who would have experienced it.

When Karen Jones was playing flute, on the recording there was a group of lads that shouted out “what a load of rubbish” in quite a lyrical way. That was brilliant, hearing that again on the recording, displaced in another station.

I’ve really enjoyed working with Matt and understanding how he’s written the pieces has been how he’s composed each of the duets specifically for each instrument and also closely working with the performers who were inhabiting the costumes. It’s quite a challenging environment for some of the performers to play. Because I’d purposely spent quite a bit of time on the Victoria Line I feel really privileged to have worked on the project. I feel quite protective of the Victoria Line now. 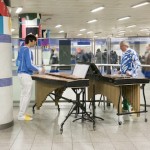 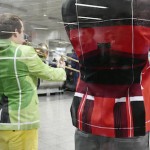 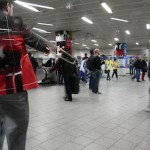 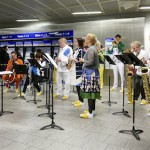