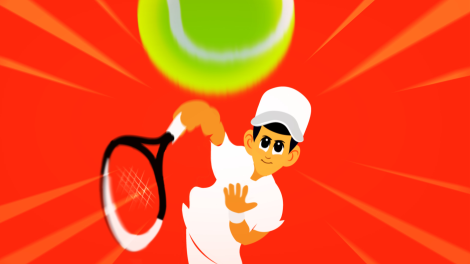 MA Character Animation graduate Zuzanna Szyszak has received an overwhelmingly positive response to her film ‘Adje!’ The Movie – including from the subject of film itself, tennis star Novak Djokovic.

Adje! tells the story of Novak Djokovic a Serbian boy who had a dream of becoming the best tennis player in the world. Inspired by Djokovic’s role as a model for endurance and hard work as a route to success, as well as his struggle against adversity from his humble origins in war-torn Serbia.   After being picked up by the Polish press, Djokovic and his wife spotted the animation on Twitter. Moved by the film, Djokovic contacted Zuzanna personally to offer his appreciation.

“I am beyond words after watching this. It brought back memories and it brought tears to my eyes. I’m very humbled and honuored by this work of art. You are going to do some amazing things Zuzanna in your life! Well done!”

With Wimbledon currently underway, Zuzanna’s film has attracted attention from the international press and has continued to receive a huge amount of support. More info: