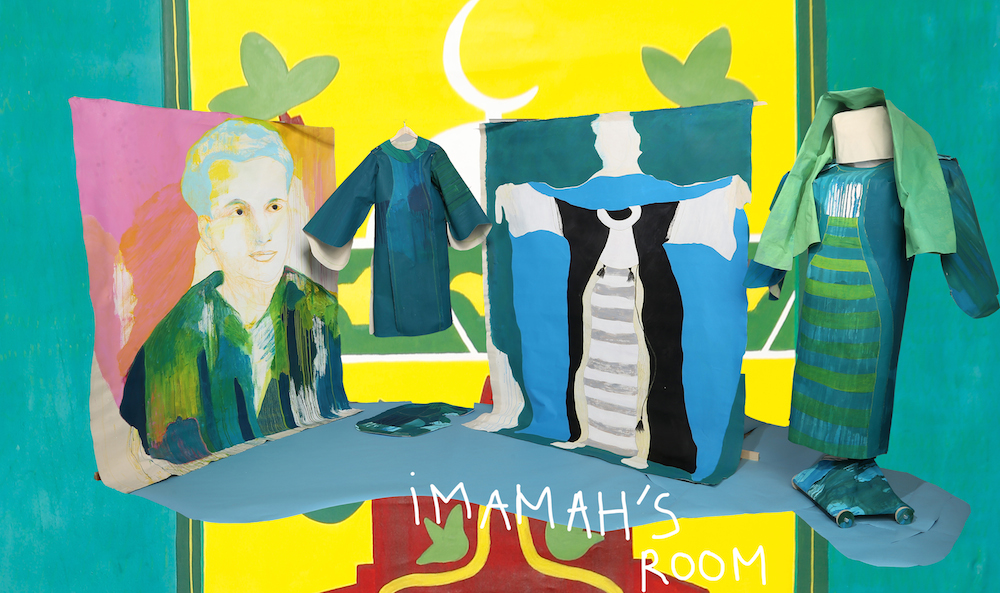 Juliana Dorso, ‘A Rabbi, An Imamah, An Reverend and Their Wardrobes’’

BA Fine Art student Juliana Dorso describes herself as a visual poet and painter inspired by the writings of Virginia Woolf, exploring territories, memories and people. Her Degree Show work in particular explores the writer’s  A Room of One’s Own, taking Woolf’s assertion that, “to have a room of one’s own is to have the right and the possibility to be independent and have a place which belongs to you to live, to write, to think”.

Titled ‘A Rabbi, An Imamah, An Reverend and Their Wardrobes’, Dorso’s work seeks to create “pictorial spaces that can speak, walk, present for themselves.” Inspired by interviews she conducted with three European religious leaders: the Rabbi Delphine Horvilleur in Paris, the Imamah Sherin Khankan in Copenhagen and the Reverend Rose Hudson-Wilkin in London, Juliana designed for each an outfit and three paintings.

While making these outfits and paintings, she was struck by the notion of representing three powerful women. “I decided to create oversized mannequins that could express their functions, without faces, and the ambiguity of it: they could be a scared or reassured symbol depending on who is looking at it,” she says. “This European ecumenical feminist project is a glance upon a religious minority less visible in the public sphere than the idea of the extremist one, which is over-represented within the media.”

Here, Dorso shares five places that inspired her work in Degree Show One, which opens next Wednesday.

1. The London of Virginia Woolf

The first place that inspired me was a fictional one. I have read Mrs Dalloway when I was 9 years old and it has deeply transformed the way that I see the world. As I used to move a lot, this small book was a kind a nomadic space for me that I can keep with me all the time. Years later, I moved to London in order to explore further my research about fictional and nonfictional Woolfian places. Virginia Woolf’s houses in and out London are a strong inspirational space for me. Richmond was the starting point then came Rodmell, Charleston, Gordon Square and Regent’s Park where I display a pictorial tent inspired by Mrs Dalloway and A Room of One’s Own both written by Virginia Woolf.

2. Free-diving in the lagoon of Mayotte

I strongly believe now, years later, that my pictorial practice is traversed by the chance I had as a child to go free-diving in the lagoon of Mayotte. The memory of free-diving still inspires me while I paint: full of colours and an idea of harmony, a fluid one. 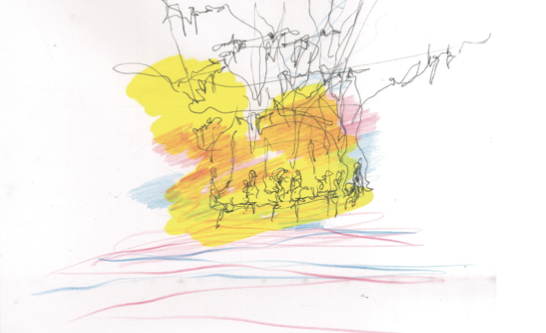 Anywhere under the sunlight lying down with friends and drinks, food and cigarettes. The space that friendship creates while we are together, chatting laughing and listening to other’s stories are quite inspirational for me.

4. Skyline of the Ocean

The skyline in Brittany where I used to go every summer since I was born is an important landmark for me. While I am watching the skyline I know I am at the right place. At the seaside I feel at home, even when I am in a different country.

During my residency at Fondatione Aurelio Petroni, I could see the sea from my window. The beauty of the house and the landscape, plus the generosity of Caroline Houben and Chiara Caterina and the inhabitants of San Cipriano was a marvellous time for me, next to the sea it was a beautiful moment.

Last but not least, my favourite space is the blank surface-like canvas or paper where I can express my ‘room of one’s own’ and create for others a kind a room of one’s own.

Juliana Dorso has been nominated for the 2017 MullenLowe Nova Award.