MA Fine Art student Aleksandr Tishkov’s work is a critical analysis of ruins, historical remains, anthropology and ecology. Interested in the fluidity and disintegration of monuments, he questions the stability of cultural inheritance and its future influence in the age of the Anthropocene. Using materials such as wood and plaster, his sculptural installations are made up of interconnected objects and structures. Prone to erosion, or used in archaeology, the materials Tishkov employs reference the precarious nature of historical significance. Here he talks us through the five elements that comprise his Degree Show installation The ruins of tomorrow and the materials and symbols that define them. 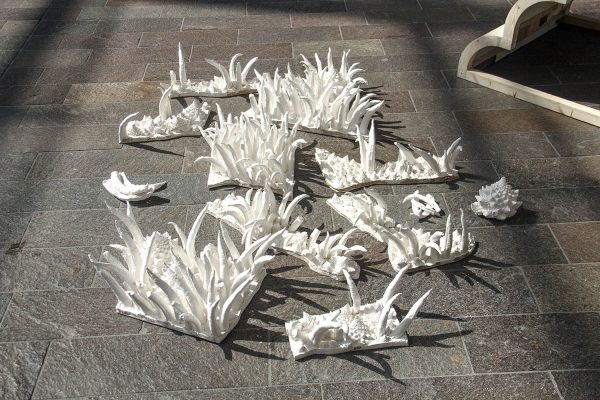 For my final project, I was responding to the biblical conception of paradise, questioning the idea of our possibility to be welcome there in the afterlife. For this reason, I chose to produce a staircase construction because it symbolically combines an earthly ecosystem with a transcendental one. However, the stairs I have created are curved, refusing the possibility of ever climbing them. The wood structure is reminiscent of a theatrical stage set, rather than an imitation of reality. This is intended to reframe the religious image of paradise, satirising its sincerity and instead translating it into a prop for a play. I have incorporated materials such as plaster and cardboard, replicating the plants and palm trees often associated with paradise, highlighting their artificiality and absurdity. In this work, It used to be me, I have filled my own silhouette with vegetable casts – artichokes, red peppers and Romanesco broccoli. With this action, I relate myself to the organic matter that we all consist of, and to the circle of life, whereby decomposition gives essential nutrition to the soil, in turn giving new life. 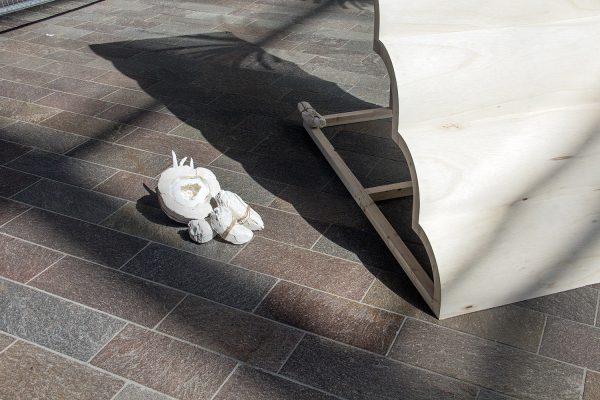 The plaster moulds installed to the left-hand side of the staircase gradually, over a long process of casting, have become less recognisable in form. They should create the sensation of belonging neither to this world nor the imaginary. 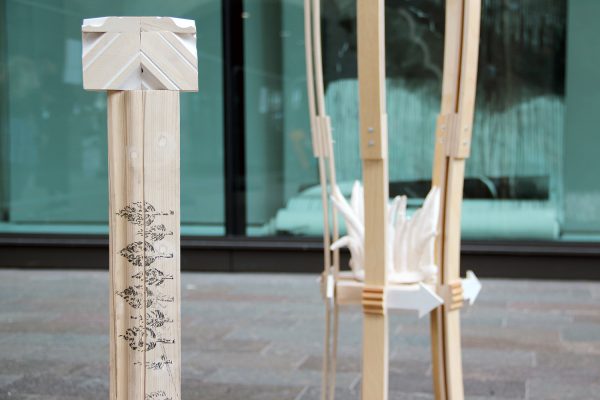 Similarly, the T-shaped column bears some resemblance to architectural structures, but at the same time it has no functionality or practicality. The use of plaster to render these objects is informed by its common use in archaeology. When objects cannot be preserved, plaster casts are often made to extract patterns and shapes from the ground. Throughout history, we have always tried to perpetuate and solidify moments into monuments. Representing historical fragments of time, these monuments and architectural structures become a target for iconoclasm, exposed to revolutions, wars and ritualised vandalism. In this cultural disappearance, ruins are left to decay, acting as a reminder of the passage of time. In A Zigzag Frame, I wanted to show the fluidity and vulnerability of monuments and similar manmade structures, that are exposed to weather conditions, deliberate acts of destruction, natural disasters, war and depopulation. With this in mind, I have taken and manipulated a silicone cast of a picture frame. This unfamiliar flexibility of the materials destroys any indication of solidity, instead making us think about the temporality of material.

As a continuation of the previous element, both the transparent structure of the column and the palm tree made from a cardboard symbolise the instability and fragility of physical matter. Here, the palm tree also functions as a reference to the massive plantations of palm trees around the world, the cultivation of which leads the environment to its degradation. Collectively, the allusions and references within the work can be summarised in one question: Living in the 21st century, have we evolved enough to be able to preserve a culture and ecology in the conditions we have inherited, or are we more concerned with creating additional problems for the next generation to tackle?