In this series we connect the dots on work in Degree Show Two. Here, we look at engaging empathy through design…

Design, it could be said, is an intrinsically empathic process. To connect with the lives of others, to think from another’s perspective in order to rethink the world.

A project in Show Two that harnesses the power of empathy most acutely is Di Peng’s ‘Dementia Simulator’ (MA Industrial Design). The adage of only knowing someone when you’ve walked a mile in their shoes is put into practice with Peng’s headset which allows the user to experience a variety of dementia symptoms. Proposed for caretakers and family members of dementia sufferers, the headset disrupts sensory experience such as obscuring people’s faces so the user has difficulty recognising them or obstructing speech so communication is only ever partial.

The process of stepping into someone else’s experience is taken to absurdist extremes in Freya Morgan’s series of screenprints If People Were Like Plants. The soon-to-be graduate of BA Graphic Design has created domestic scenes in which the human inhabitant swaps places with a pot plant; so as leaves luxuriate in bed, a vase on the chest of drawers nearby is stuffed with disembodied arms. 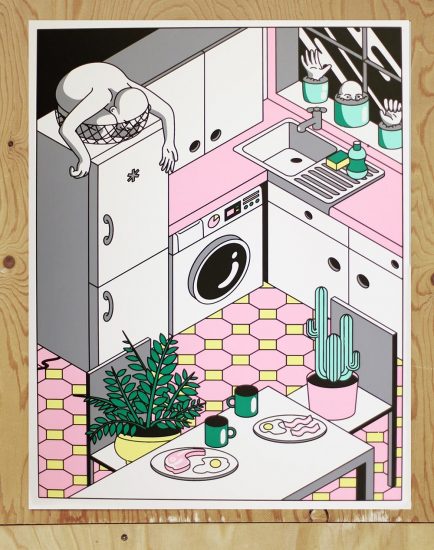 If People Were Like Plants, Frey Morgan (BA Graphic Design)

Her work, though laced with healthy doses of humour, stems from her emotional connection to plants. “I’m always devastated when they die,” she explains, “Obviously plants don’t have a central nervous system in the same way that we would understand it, but they might feel in a way that is completely intangible to us. You just never know… These illustrations represent my take on mankind’s selfishness. I’m evoking a sense of equality between the two entities in that, in some alternative world, the plants would be keeping us on their shelves.” Anthropomorphism appears again in Joely Clinkard’s Humanware collection (BA Ceramic Design). Her ceramics – characterful vessels standing on awkward, metal legs – are an ode to her experience of the city. The colours painted on her surfaces echo the diversity of the people that embellish the grey and brick of London’s backdrop. “My work celebrates people and individuality,” Klinkard says, “it’s a bottom-up politics, accentuating the good things about difference and the vibrancy of the city.”

While Clinkard takes inspiration from the materiality of the city, it’s the power of place to help forge connections across communities is explored by Helena Jordan (BA Architecture). Focused on Cliftonville in Margate – an area of which a third of the population moves in and out each year ­– Jordan’s project seeks to build connections between the local transient and indigenous populations. Called Northdown Network, Jordan’s plan centres around a community hub and housing comprising nurseries, kitchen and dining spaces, and learning zones using the form of the cul-de-sac so users slow down and engage with the environment.

“By making the programme and design as interactive as possible you can create these empathic situations,” says Jordan, “If you see the same person a couple of times there’s a bond, a build up of small interactions that goes on to build bigger, lasting relationships.”

Having lived with various families in Margate, Jordan gained an understanding of what people were, and weren’t, getting from their housing and local area. She identified the resources that both new and long-term local people needed, from a free nursery to a community kitchen and a skill swap. The scheme is volunteer-run and supported by local business: “It’s for people, they decide how they want the building, it’s transformable… Architecture is for people and they make it what it is.” Biying Shi (BA Graphic Design) is using film to dismantle the preconceptions of the ‘Made in China’ label. The Chinese designer documented and interviewed workers at various factories and workshops producing furniture, paintings, electronics and shoes, often in reproduction rather than new designs. “I want to tell a story,” says Shi, “I think ‘Made in China’ is not just a label that talks about the country of origin but it’s also a metaphor for the complex relationship between the consumer and the works. I want to make a multi-dialogue story so my audience feels those barriers and prejudices.”

If empathy is about taking on others’ perspectives, Show Two explores design’s ease with empathy. From dementia sufferers to pot plants, these are projects connecting to, and enhancing, our  emotional understanding of not only ourselves but our wider community. At a time when difference threatens more and more to define our political and social landscape, founder of the Museum of Empathy, Roman Krznaric – who spoke at the College last month – implores “we are now in a more urgent need of empathy then ever before”.