An alum of our Foundation Diploma in Art and Design and Graduate Diploma in Animation (now MA Character Animation), Phoebe Boswell’s work spans across mediums bringing together traditional drawing with digital technology to share stories of migration. Last year, she was awarded the prestigious Future Generation Art Prize’s Special Prize at the Venice Biennale for her interactive installation Mutumia.

Here, we talk to Boswell about her practice, Mutumia and exhibiting at Venice, and shares her advice for studying at Central Saint Martins. 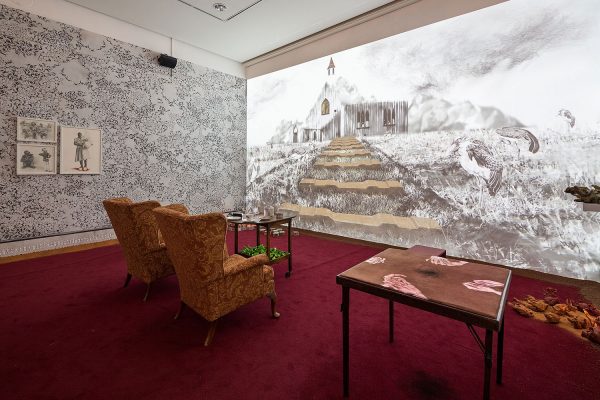 The Matter of Memory – Phoebe Boswell

Tell us a little bit about your practice and what inspires your work.

My practice merges traditional draftswomanship with digital technologies, layering mediums including drawing, animation, film, sound, sculpture, and interactivity, to form installations without one fixed point. Owing to my own history and personal trajectory, I’m interested in telling stories that speak of the diasporic condition – fractured, multilayered, contradictory – so I’m constantly trying to formulate visual languages robust and complex enough to house these stories. I mostly seek my impetus from the personal, gathering testimonies from others or delving into my own biography, and building these up through the work, to convey something larger than the individual – something that is nuanced, complicated, truthful, and universal.

When did you first realise that you wanted to work as an artist? What drew you to drawing in particular?

I have always drawn, for as long as I can remember. It’s intuitive, an immediate medium. You can speak to the immediacy of life through drawing, and yet it is time-based, so it also offers space for deep contemplation. And the fact that your hand does it, that you make marks on a page and those marks become a way in which to speak, I find it invigorating.

How did your time at Central Saint Martins help to encourage the way you work?

I did the nine-month PgDip in 2D Animation. I don’t think it exists anymore, it’s now a two-year MA. I wanted to learn to make my drawings move, not necessarily to get involved in the industry of animation, so it was a perfect course in that regard, as I left with a whole new skill. Hand-drawn animation is time-consuming and the course itself demanded a rigorous work ethic, to complete weekly tasks and then finally to make your degree film, so it definitely taught me how to focus which is something that has carried through. 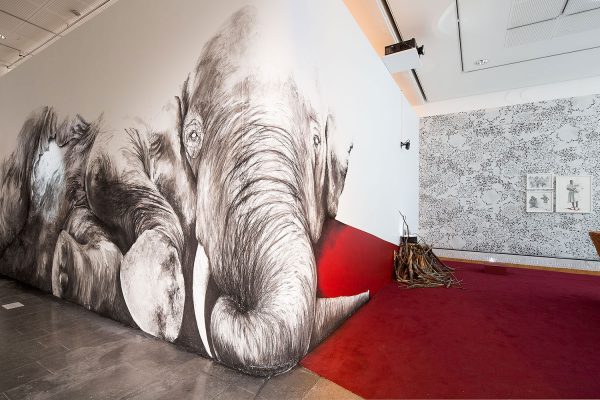 The Matter of Memory -Phoebe Boswell

When did you first start digitally animating your work? What inspired you to do so?

I started animating at Central Saint Martins. My work for some time before that had been missing the element of time – I was making large-scale 2D installations in adhesive vinyl onto walls, of this perverse shadow world, with little silhouette figures getting into all sorts of sex/death action. My initial impulse was that I wanted to learn how to make them move. Following the course, I did a small show where I projected an animation onto a wall, and the magic and limitless potential that I found through the act of projecting became a driving force moving forward, I just wanted to project on every-damn-thing and see how it came to life. It continues to thrill me, as does seeing my drawings move; it never gets old. 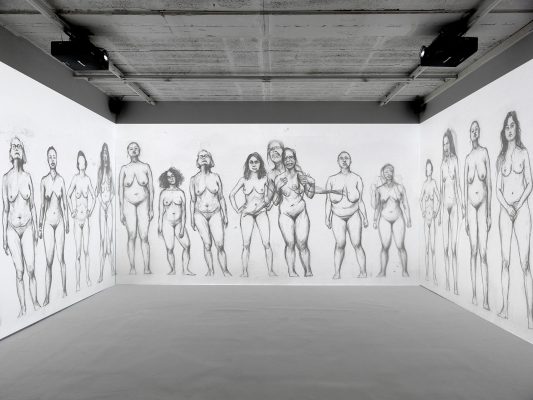 Congratulations on being awarded the Future Generation Art Prize’s Special Prize at the Venice Biennale! Can you tell us more about the piece Mutumia?

Thanks so much. Mutumia is an interactive installation that was first commissioned by the Centre d’Art Contemporain in Geneva for the Biennial of Moving Images 2016. It’s a six-screen looped animation of an “army” of hand-drawn naked women, which is projected large onto all the walls of the gallery space. It’s a salute to women who have used their bodies in protest when they haven’t been permitted to use their voices.

I drew from real women who answered a call to come to my studio and explore, through their bodies, various emotional states of protest. The animation goes through these states, and the audience is invited to acknowledge the presence of these women on the walls of the very white male-dominated space of the art gallery. The animated women are silent, but the centre of the space is fitted with hidden sensors, each linked to a soundtrack of women’s voices, so when you stand and acknowledge the women, you enable their voices to be heard. The voices include a gospel choir, prominent Kenyan feminist writers Wambui Mwangi and Ndinda Kioko reading their work, women answering provocations from Audre Lorde’s Transforming Silence into Language and Action, a conversation I had with my mother, and various others. When you are alone in the room, you only hear one track at a time as you traverse the space, but when the room is full, there is a crescendo of women’s voices.

When I showed the work in Kiev for the first iteration of Future Gen, I encouraged the audience to use their agency to write on the surfaces of the space as an added act of resistance. When I showed it in Venice, I offered a separate space where women could record their voices and these recordings would feed into the interactive floor. So it is a very interactive, and growing, work.

How was exhibiting at the Venice Biennale different to other exhibitions?

It was a dream to show in Venice, of course. It still blows my mind. Obviously, the technology restrictions when showing in a palazzo, and getting everywhere by vaporetta was something that required problem-solving and patience at times, but what an honour, to share space with so many heroes from all over the world. The Matter of Memory – Phoebe Boswell

Your work spans across drawing to animation, film and installation, how do you decide which medium will be most impactful for each work?

I usually start with a personal testimony, either my own or my subject’s, and in the studio I slowly start to make drawings, tiny animations, bits of writing, all in a knee-jerk way, until it begins to formulate into something more tangible. I have built up a toolbox of media over time, so I call upon what is needed instinctively, and build installations up organically. This can be a long process and I like to give my work time, time for me to ruminate and for the thing to become a thing. It’s only recently that I’ve introduced interactivity into the work, for instance. This is something I am intrigued by and keen to explore further.

Ultimately, I want to communicate some sort of truth to people, and I think there’s just a moment when you know you are really speaking, right? It’s the same visually. There’s a moment when you just know the form it is going to take.

I’m currently working on my first New York solo show, which will be at Sapar Contemporary in May 2018. I have also recently been made a Ford Foundation Fellow so I’m working towards a large-scale project for that, and I have a film in my head that needs to come out. And a few other bits and pieces…

What words of advice would you give to a student studying for a Foundation Diploma in Art and Design?

Be open. Be humble. Try everything. Don’t be precious. Make work you are embarrassed by and fail triumphantly. Don’t rest on your talents, use this time to expand in ways that surprise you. Learn how to apply for things and thicken your skin to rejection early. Learn how to fortify yourself from it, because it will come. Research independently. Find the artists and thinkers who align with you. Your tutors might not know who they are but that doesn’t mean they don’t exist, they do. Be present. And do the work.