One Year On: Sarah Craske

With this year’s Degree Shows in full swing, and the NOVA Award winners soon to be announced, we catch up with last year’s winner.

Sarah Craske describes herself as “a British artist, without category”. A graduate of MA Art and Science, her work won last year’s NOVA Award which is presented to one student selected from across all disciplines. Her graduating project presented a transdiscipline, a collaboration with scientist Dr Simon Park, and Dr Charlotte Sleigh exploring books as both repositories of written knowledge but also collateral biological information.

With libraries digitising their manuscripts and books enabling global audiences to access them, Craske wondered about the impact on the physical artefact. As objects, do they have other systems of knowledge to offer rather than just the text on the pages? Focusing on the micro, Craske went looking for the biological information hidden in an 18th century copy of Ovid’s Metamorphoses. Her degree show work included the cultures of the bacteria as well as magnified ‘maps’ revealing the microbiology discovered across the pages of the book. 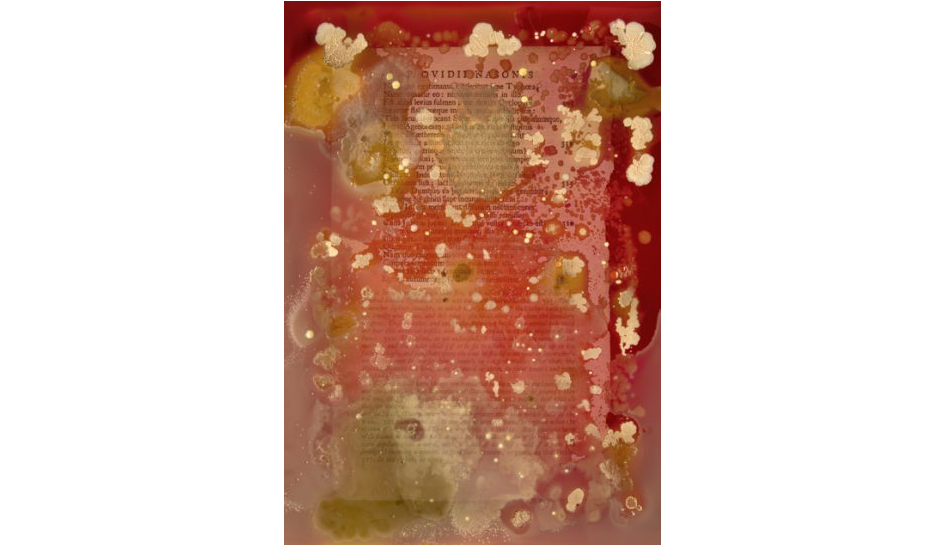 A year after her graduation, Craske is splitting her time between Manchester and Basel. The artist has secured the Biofaction Residency at the prestigious ETH in Switzerland with funding from the EC-EP7 project SYNPEPTIDE. Working within a team that specialises in synthetic biology, she has been designing her own peptides, “playing with the building blocks of life” as she describes, in the hope of creating her own synthetic organism. She is then planning to set up a performative experiment in which her synthetic organism makes contact with cholera, and will be documenting the results. One of the synthetic peptides, Craske is working on

Working with the Pharmacy Museum, also based in Basel, Craske is not only engaging with cutting-edge technologies but using the rich historic archives as a treasure trove. Connecting the past to the present, Craske’s practice also bridges the worlds of arts and science often placing the artist as a translator between the two disciplines. “When I first arrived I was initially translating it for myself,” she says, “but about a month in, I’ve built up the language to talk about it, to move between the science lab and the arts practice… It’s been fantastic being in a practice that transcends the ‘building wall’ politics. Science collaboration benefits everyone globally and to be embedded in that is wonderful. The art world, too, is a global community so it’s interesting to reflect on the potential of how they could work together.”

Back in the UK, Craske is artist in residence at Chetham’s Library in Manchester, the oldest public library in the English-speaking world.

“People have been using these books over the last few centuries. So the amount of biological data they potentially hold is incredible… In private libraries, books are of course kept on shelves, locked away and rarely looked at. Whereas here there are significant editions – like Robert Hooke’s Micrographia – that have been accessible to many since its publication. It’s a brilliant place.”

In the midst of her ETH project and with an exhibition in Manchester on the horizon, it’s a good moment to reflect back on the impact of winning the NOVA Award a year ago. At the awards ceremony, Craske recalls the announcer having to say her name twice before the realisation dawned that she was the winner. “If I’d known the impact of the award then, I would’ve been even more nervous,” she says. “It meant I wasn’t pressured into finding work immediately and I’ve used the financial support to develop novel printing processes with bacterial inks. I wouldn’t have been able to do any of it without NOVA.”