Earlier this year 2015 MA Performance Design and Practice graduate, Laurence Dollander was selected to take her most recent project ‘Life : Sentence’ to the prestigious Avignon Festival. With the festival now open, we caught up with Laurence to find out more about her performance, the challenges of taking the project to France and why studying MA PDP was so important.

Can you tell us about the piece you’ll be performing at the Avignon Festival?

It is about immigration on a universal level so it’s not specific to the refugee crisis, it is on a human level. It’s documentary theatre, it has a as social and political resonance. The idea was to follow languages to see where it takes you – that was the starting point as languages are part of our identity. I wanted to present people at the same level through using languages because at a basic level, they are all the same.

What sort of research did you undertake for this piece?

I wanted it to be London focused because that’s where I live. My projects are based on what’s directly surrounding me so I narrowed it down to my neighbourhood as a sample and I interviewed all sorts of people. I put an advert up at my children’s school, I thought that because it was so multicultural that I would have people from all over the place interested in the project.

The people who are a part of the project are mainly women my age. There is a Romanian couple, they are younger and they have a different approach to London. There is a cellist, who worked with me on a previous project. I also interviewed a Lithuanian lady who doesn’t speak a word of English. I had to type the questions, show her and then ask someone to translate them for me later. She was really pleased and happy to take part. 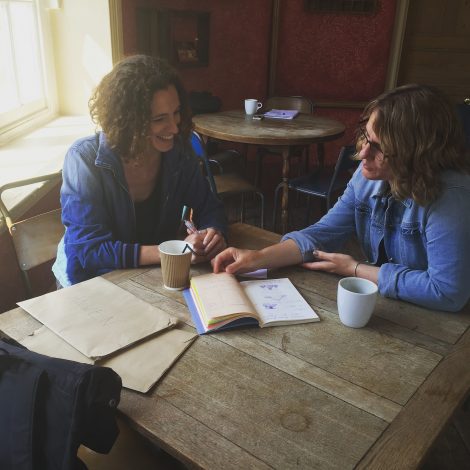 You’ve described the piece as a documentary theatre piece, is this the sort of area that you normally work in?

Yes. I always present two things in parallel – the footage and the people on stage. I just love interviewing people and it works very well, I find what they talk about really interesting and I love editing the videos – I could spend hours just doing that. I also like to work with the layers. I fell into filming people in a way. I wanted to create something that wouldn’t make you too distracted from the stage. I try as much as possible to avoid people wondering where they should look.

What are the challenges of taking this project to Avignon?

Even though I am French, the big challenge is that the festival is French. French theatre is different, I have to adapt to that but at the same time I am quite intrigued to see how the audience will take it. I think it is very much within the British tradition of art; it doesn’t really follow the French approach so even though I am French I am taking it as a sample of British theatre and that is how it is marketed, definitely. It has got the stamp of what you see here.

You’re a recent graduated of MA PDP, how did the course prepare you for life after graduation?

I have been a musician for all my life and I just wanted to create something with my skills and that is exactly what MA PDP made me do. The course made me put all the pieces of the puzzle together, my work is a combination of what I am interested in and what I am able to put together so my work suits my personality very well and I am able to work very closely with what I like. The course helped me find my style and for me it worked very well, it was the perfect choice.

Was there one particular project that stood out for you?

I took part in the community project, Michael Spencer suggested I give it a try because I am a musician and it was based around Madam Butterfly, the opera that was running at the Royal Albert Hall at the time.

We worked for eight weeks with a group of old ladies from a community in St John’s Wood and we spent time working out that we had things in common. We played with every day objects that told stories and at the end of the day the theme that we took up for the project was love. All the ladies came back with their own tragic love stories and I recorded them speaking, it was very touching. That’s what I do, I record people and listen to people’s voices and the way they talk, it was very interesting.

What are your plans for after Avignon?

I plan to show the performance in London, it really finds its place here – it is very much a London project.