Cécile Van Dijk studied BA Theatre Design (now BA Performance: Design and Practice) at the College from 1998 to 2001. Since graduation she has worked as a costume designer and cutter on many films, including The Last Jedi, The Beat Beneath My Feet, and Narcopolis. Most recently she worked as head cutter and advisor on Paul Thomas Anderson’s Phantom Thread, which has been nominated for an Oscar for Best Costume Design. We spoke to her about her work on the film.

How do you remember your time at Central Saint Martins?

It was amazing; like a breath of fresh air. I loved the fact that it was very cosmopolitan, everyone was from all over the world. We were exploring performance, theatre, direction, design. We trained to be a designer as a whole, not just to work on a piece of scenery or a piece of costume. We oversaw the whole performance, which was of great use for a future career. I am quite nostalgic about that time at college, it was great fun! Claire Christie was my costume tutor, and I went on to assist her after graduating. We are still very good friends, she is teaching at London College of Fashion on the Design for Performance course now. She was, and still is, a big part of my journey – always a figure of inspiration.

Tell us a bit about your role as head cutter on Phantom Thread.

Since graduation I have been working as a designer and also as a cutter on many films; I strongly believe that having technical skills are crucial to being a strong designer. When Phantom Thread came up I immediately knew it was going to be special and as a bonus the workroom ended up being set up in the old Central Saint Martins building on Southampton Row, which brought back lots of great memories from my student days.

With the film being set in the 1950s, the golden age of fashion couture and a period of design I particularly like, it was a great opportunity to research more. I was working closely with costume designer Mark Bridges and we explored many silhouettes and shapes to make sure costumes would fit the story that the director was looking to tell. After being given the fabrics chosen by the designer I was in charge of creating the costumes’ patterns, supervise their construction and make sure fittings ran smoothly. Most couture dresses from that period were mounted on silk organza or cotton organdie and we also used cotton bobbinet for the corselettes; that way the dresses were constructed in a manner very true to the time. One of the trademarks of the 1950s was having as few seams as possible so there was a lot of draping, which I love.

For one of the dresses we managed to source a gorgeous three-metre 17th century Flemish lace; there was a lot of discussion on whether we should cut the lace or not. We had a meeting with Reynolds [Daniel Day Lewis] to get his feedback on how he felt about it and true to character he told us to cut the lace to give it a new life, to free it. So I did, almost religiously really, observing the lace, letting it speak to me. It was a humbling and fascinating experience, a privilege to analyse how it had been handmade over 300 years ago. That dress was beautifully crafted, I’m proud of it. 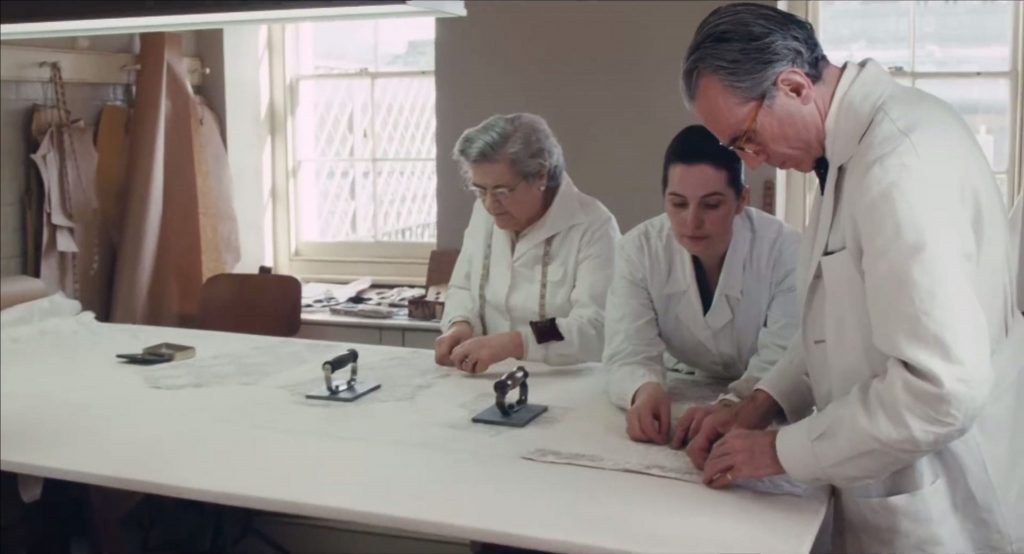 You were also advising Daniel Day Lewis on pattern cutting for his role. What was that like?

Daniel Day Lewis came to the workroom to have a look at a few toile shapes and even got involved in Henrietta Harding’s toile fitting (played by Gina McKee). When filming started I was asked to go on set to give him costume refreshers and to talk about the shape and toile. He would draw lines and symbols on it to make it belong to Reynolds, his character, which I think was an important process for him. I was also included in the rehearsals so we could discuss the gestures involved in toile fitting. Daniel was fantastic to coach as he trained at the New York City ballet and even made a copy of a Balenciaga dress for his wife; I was impressed by his skills.

You make a brief appearance in the film. Can you tell us a bit about that.

One day towards the end of the shoot Mark Bridges came into the workroom and said to us that Paul Thomas Anderson really wanted us in the film. Next thing we know, my team and I are having our own costume fittings to become 1950s seamstresses, clad in white coats, no make up. We only had two days to shoot the scenes. I was assisting the art department, Paul Thomas Anderson and Daniel Day Lewis, as well as embroidering the “Never Cursed” label and being on camera. There is that big close up of me frantically sewing and the concentration on my face is genuine; those were a crazy couple of days.

And you also visited the fashion archives of the Victoria and Albert Museum.

That was an amazing experience. There is nothing quite as exciting as seeing the real thing in front of you, let alone privately. We tried to recreate the feel of a Givenchy dress we selected and examined; the inside wasn’t lined and quite rough so we kept it that way as it was very common in the 1950s.

Do you always put in so much research to your work? How does that work on films like The Last Jedi?

The Last Jedi was a bit different because it was such a big production. The designs were already approved before I started working on it but still I did a lot of research which it is part of the process. This particular project was more about textures and extreme body shapes as I worked on costumes to fit space creatures.

What are you working on now?

I am now focusing on my costume design work. I have recently designed a commercial for Eurostar and a few feature length and short films but I want to push myself further creatively. I am looking at some feature films projects to work on, but nothing I can talk about yet.

How would you say that studying Theatre Design equipped you for your career?

It taught us how to be professional, collaborative and showed us the importance of working together as part of a team, exploring the creative process and developing an eye for things. We were always encouraged to push ourselves, challenge ourselves beyond our initial creative boundaries and explore new ideas, often through interaction with other students and staff.

Finally, do you have any advice for students looking to work in costume design?

Work hard! Always do your best and always be honest. Unfortunately, no matter how talented you are, there is always the luck factor so try your luck. Most importantly, I believe that hard work always pays off in the end.