In celebration of the diverse range of skills within our Fashion programme, we have commissioned a series of designer profiles from our second-year BA Fashion Journalism students. Showcasing the art of fashion designing and fashion writing, each profile will provide an in-depth insight into the work and inspirations of a selected designer. Here, Trey Gaskin profiles Knitwear student Paolina Russo who was named the 2018 L’Oréal Professionnel Young Talent Award winner at the Central Saint Martins BA Fashion Show last night. She was also one of two runners up for the 2018 MullenLowe NOVA Awards.

Paolina Alexandra Russo’s final collection I Forgot Home, rooted in nostalgic neon and illusion knits, brings a piece of her own childhood onto the catwalk. The six-look collection granted this 22-year-old entry to the coveted Central Saint Martins BA Fashion Press Show and saw her take the L’Oréal Professionnel Young Talent prize. 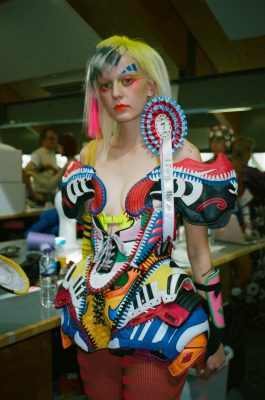 Born and raised in Markham in Ontario, Canada, Russo grew up enjoying and excelling at the fruits of suburban life: singing in an Avril Lavigne cover band, participating in competitive dance and becoming a nationally-ranked Taekwondo student. After quitting dance, Russo began her Central Saint Martins journey on the Fine Art pathway in the Foundation Diploma in Art and Design, but when painting proved different to her initial hopes, she developed a love for fashion. “I ended up doing the fashion foundation because I was just trying out everything and it felt like painting or sculpture in a different way, but on the body”, explains Russo. She continues, “I liked working really sculpturally and playing with different textures, so my tutors recommended that I do knit. When I got onto the course I loved it, it was really technical but still so creative and I loved it.”

During her placement year, Russo moved to Paris to undertake a celebrated couture design internship at Maison Margiela, under the creative direction of Central Saint Martins alum John Galliano. In live conversation with journalist Tim Blanks for the Business of Fashion in 2016, Galliano spoke extensively about the young knit designer, citing her as one of his “new muses”. But the Canadian designer’s creative reach spans far beyond designing, often working as a stylist with all-girl band Dreamwife and in 2017 she was shot by Kendall Jenner for Love Magazine. A month before the Central Saint Martins Fashion Show, Dazed and Confused debuted their Spring/Summer 2018 cover with musician and fashion icon Solange Knowles wearing Russo’s athletic sneaker corset – a feat for an established designer, let alone a student waiting to graduate. 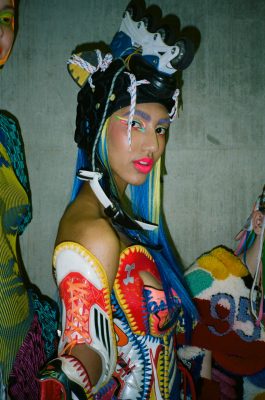 Counting on her hometown neighbours, family and friends, Russo collected and repurposed old sneakers, soccer balls and athletic equipment. These items were the foundations for what have now become her signature shoe corsets and dresses: “I like that with shoes, you wear them on your feet but when you put them on, it’s not what a foot looks like but you recognise that it’s on a foot. Like when you wear a pointed shoe it elongates your foot and that’s a nice sexy look and I thought, can I do that with the body as well?” Alongside references to sport, Russo also turned to “crafty, very granny-ish things”, epitomised by a love for Laura Ashley, which she incorporated into her final collection.

Russo’s mother innocently recalls her at four-years old asking, “Mom, when you grow up will you support me?” At her mother’s response (of course a yes) Russo continued, “I want to be a starving artist.” Now named as the L’Oréal Young Talent winner, and with an endorsement from Solange, she is looking to surpass her early childhood dream already. 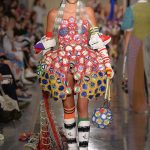 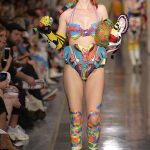 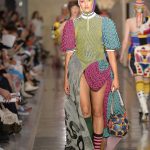 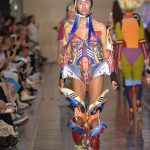 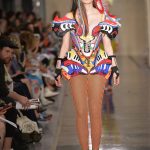 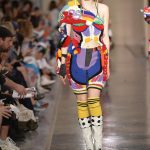