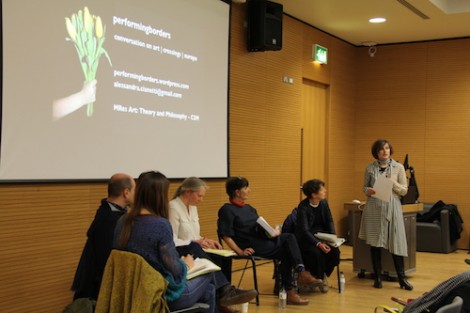 After researching border theories for her dissertation as a second-year MRes Art: Theory and Philosophy student, Alessandra Cianetti decided to set up a blog called performingborders, a platform that explores live art, crossings and Europe.

Alessandra also hosted an event here at Central Saint Martins on 30 March, inviting speakers to present their own perspectives in an open discussion about the role of live and visual art in the fluctuating reality of Europe and its proliferating and increasingly heterogeneous borders.

We spoke to her about the relationship between art and activism, what she’s learned so far, and her hopes for the year-long project.

I chose the title because it leaves the research question open on many levels: how to perform overlapping and shifting notions of borders, who is preforming them (the artists? All of us? Are the borders performing instead?). It’s a series of open and unanswered questions, and with this research I’m investigating how live artists are responding to these questions within the European context.

You’re going to be interviewing one artist, thinker or art professional a month for your research. Who do you plan to talk to?

Yes, each month I publish an interview with an artist, art organisation, or academic who is working on issues related to live art, crossings and Europe. I started with Lois Keidan who is the co-director of the Live Art Development Agency, the only European organisation that focuses exclusively on the development and study of live art. I am really happy I could share her perspective.

In March, I published the interview with the brilliant Lebanese live artist Tania El Khoury on her work on the Syrian uprisings and the so-called refugees crisis; and this month the blog features the interview with Núria Güell, whose challenging work focuses on live art interventions that cross the limits of legality and institutional powers.

There’s also upcoming interviews with Irish-UK live artist Helena Walsh, who works on notions of feminism, labour and migration, and Almir Koldzic, the co-director of Counterpoints Arts, an organisation that has been focusing on arts and refugees and highlighting their contribution to British society to contrast the current prevalent and negative rhetoric surrounding the movement of people. I also have some other very interesting people lined up for the coming months, but you’ll have to follow the blog to find out more.

What has for you been the most moving, or perhaps representative artistic response to the European crises?

I’m not sure I am looking for performative practices that move us. What I’m looking for in the works I’m researching is for them to make me feel uncomfortable with the constructed and accepted ways of thinking about borders, particularly what they are and how they can be crossed.

So far, I would highlight the aforementioned work of Tania El Khoury, whose performance piece  ‘Gardens Speak’, which documents the deaths that occurred during the first Syrian uprisings in 2011, was presented at the Battersea Arts Centre last March. Also Núria Güell’s ‘Troika Fiscal Disobedience Consultancy’, a scheme that challenges the European fiscal laws in order to overcome them using what she defines as her main medium: her legal body. Finally, the hilarious take on the perception of Eastern Europeans within the UK of the ‘50% Romanian and 50% Serbian performance company’ with their show ‘Eastern Europeans for Dummies’. I truly recommend it for the witty approach to stereotypes.

How do art and activism benefit each other?

That is an open question for me: can art be a way of activating change? Can artists instigate political and societal transformations? I’d say that live art (and art in general) does not have the strength to bring massive systemic changes, while political activism could be a more effective tool in that sense.

However, live interventions create the possibility of exceeding the space of the artwork, flooding into public spaces, rethinking them and our relationships with borderline concepts and places. I do think that as long as art practices are making us feeling uncomfortable with ‘our truths’, they do the job of activating us, of forcing us to respond, as audience and participants first, and perhaps then as activists.

What are your plans for the project in the long term?

As mentioned, the project started online as a series of interviews with the aim to initiate research on contemporary responses from live artists to the current European situation. I found and met a lot of researchers, groups and artists interested in discourses surrounding these subjects, so on March 30 I organised an open conversation hosting interesting perspectives on the matter from Lois Keidan (Co-Director of the Live Art Development Agency), Sophie Nield (Senior Lecturer in Drama at the Royal Holloway University of London), Juliet Steyn (co-editor of ‘Breaching Borders: Art, Migrants and the Metaphor of Waste’), Marilena Zaroulia and Philip Hager (Co-Founders of the Inside/Outside Europe Research Network).

In the near future I will be presenting part of my research at ‘Crisis’ in Excess: Performing Europe Today at the Winchester University on April 29 and I am writing a Study Room Guide on the notion of border crossings for the Live Art Development Agency that should be hopefully finished for the beginning of the summer.

In the long-term I would like to develop further the ‘resource sharing’ aspect of the project which is currently a work in progress; to organise more open encounters to keep the discussion open. At some point, I’d like to invite the various artists I have been talking to to present their work as part of a public event. However, for now I should focus on finishing my MRes!