A Bricolage of Gestures: Dream Works

The name was chosen by the group to reinterpret the term and project new meanings through a self-organised and low budget approach. “Both the words ‘dream’ and ‘works’ can be either a verb or a noun, and in the pairing of the two words there are multiple connotations,” says Lydia. “It is this word play that I think about, where there is no finite meaning.”

The exhibition displays the artists’ own work alongside two large scale projections which are collectively authored and act as a curatorial frame. “The videos and sound cite and frame individual practices and works, both explicitly and implicitly, and play with the relationship between studio practice and exhibition making, production and the ‘final work’,” explains Lydia, who has four other works in the show: Text, a collection of writing; Birds, a narration on headphones; Purple Light, which uses sound and light which is triggered by the viewers proximity to the work, and Silver Birch, work based on a camera obscura and creates an intermittent projection.

The artists were given a large shared studio space to develop their practices after graduation by the Associate Studio Programme, with many visits by established artists, curators and thinkers including Adam Chodsko, Lisa Panting, Lindsay Seers, Morgan Quaintance, James Richards, Vanessa Carlos, Neil Beloufa. “The programme presents a sustainable, flexible and honest way into the outside world for young practitioners that have recently left art school,” says Asta.

Asta’s work includes two hydrographic prints, a sculpture made of found plasterboards and two videos. “It’s all quite recent work that centres on the hydrographic process which I’ve been working with for a couple of years,” she says. “It’s a technique borrowed from the car-manufacturing industry utilising the surface of water to print onto 3-dimensional objects and surfaces. It is a delicate process contingent upon air, temperature, movement and time. I discovered it on YouTube and the main work in the exhibition which is shown on one of the large screens returns to this platform but through a 17th century cantata, lamenting lost love.” The group wanted to curate an exhibition that was a reaction to the idea that artworks are increasingly experienced second-hand: through websites, publications and social media, further looking at the ways in which these modes of mediation govern our expectations and judgements about direct encounters with artworks. Tilly adds that the exhibition is supposed to be “a bricolage of gestures, ideas and work, a way of identifying crossovers or differences, making connections to collective as well as individual concerns; a testing ground.”

Tilly’s work includes video works ‘Liquid Trust’, a film about the gaze, and ‘Hula Thunder-Clap’ as well as a sound piece ‘SkSkSk’ and some small sculptures called ‘Plaster ears’. ‘Hula Thunder-Clap’ was shot in the shared studio and describes a series of potential loops whilst the protagonist negotiates the space; the loop of 8mm film, her own hooping action, the repeating chant and the circling of the camera. Doubled up on facing screens, the film also directs the viewer around the exhibition space and mimics a POV position in the centre of the room.

“Dream Works came about through discussions around the way we could put on a show collectively after working in a shared space for three years,” Tilly says. “We wanted to address the ways in which a group show might be contextually framed and how ‘themes’ often create problems rather than unite individual works. We decided to create a collaborative film which would frame the exhibition but also act as a space to show work in a more generous way, by blurring the usual separation of studio, exhibition space and documentation, finished and unfinished work.” 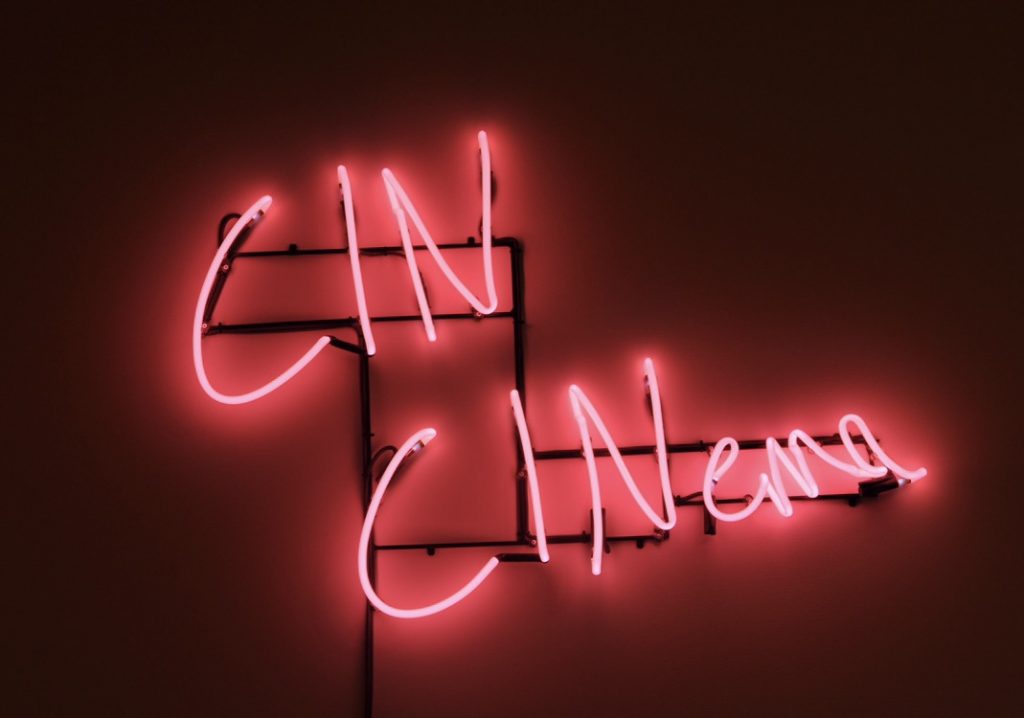 Another artist featured in the exhibition is Piotr, whose work ‘CIN CINema’ compromises a pink neon sign commissioned from a workshop in Warsaw that has been making neon signs in Poland since the late 50s. Taken from a series of works in which Piotr refers to the tradition and legacy of the cinema of past era, particularly the cinematography of the 60s and the French New Wave, the piece, he says, relates to the gesture of celebration, and touches upon this idea within the work of filmmakers such as Jean-Luc Godard and Francois Truffaut.

The piece glows from a far corner, and joins the other works in being the only non-natural light sources in the predominantly dark gallery. “We decided not to include any additional lighting, apart from natural light, and wanted the exhibition to be self-lit,” Piotr explains. “The set-up, the way we choreograph our spectators as well as the structure of the video installations relate to the cinematic experience and deals with various hierarchies typical for a multi-layered genre like cinema.”

“The film and the works in the show are able to bleed into each other,” Tilly adds. “They will interrupt the viewer as they move through the space, whether it is a sudden change in volume, a bright light being triggered or a hydrographic print slipped behind a wall. Certain objects or works are referenced in the film, acting as counterpoints, or featuring as props, subjects or documents of other exhibitions.”

Dream Works is showing in the Lethaby Gallery until December 17.