Eve Vautier's passion for lacquer started in Paris where she trained as a lacquer artist.

She completed a BA in Product Design in Australia including in her learning basic jewellery techniques. Study trips to Thailand, Vietnam and Japan opened her eyes to the potential of lacquer for contemporary culture. Reminiscence her Master project represents a radical re-interpretation of lacquer exploring its poetic possibilities for contemporary jewellery.

Lacquer craft originally used tree sap, mainly developing in Asia and reaching its apotheosis in Urushi, Japans enduring lacquer practice. European lacquer techniques, such as Vernis Martin developed as a response to Japanese lacquer during the 17th century. In Europe as well as Asia, the craft of lacquer is slowly disappearing due to dramatic lifestyle changes and shifts in its traditional clientele.

The Reminiscence project researches the memory of lacquer and the multiple layers of culture and history embedded within it, to generate new identities in the realm of jewellery. The collection uses the concepts of fossils, encapsulation and erosion to evoke the memory of lacquer on both a physical and abstract level offering wearable artefacts that are unfamiliar yet desirable. Part of the collection has been realised by re-interpreting Vernis Martin into contemporary jewellery. The other has been developed in a ground breaking collaboration with Japanese lacquer craftsmen from the Aomori prefecture, one of the birthplaces of Japanese lacquer. This collaboration established new bridges and provides a base for future co-operations between lacquer communities worldwide.

Since graduating Eve has worked for in the jewellery and accessories design team at Hermes and as an advisor on lacquer production for Hermes. She is currently designing for Astley Clarke Jewellery and her own range of lacquer jewellery is launching in collaboration with Artisans Angkor. 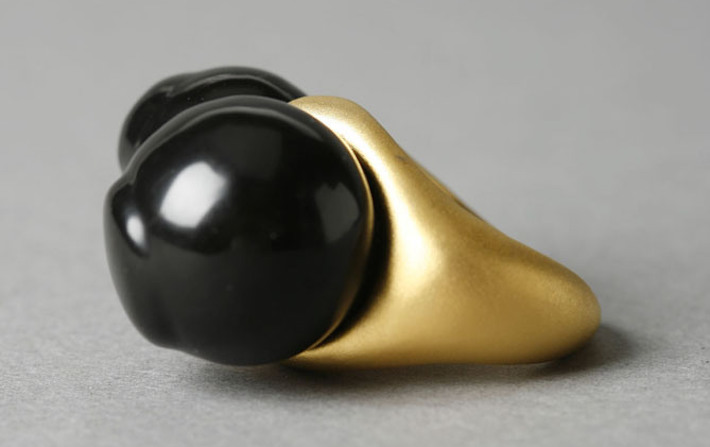