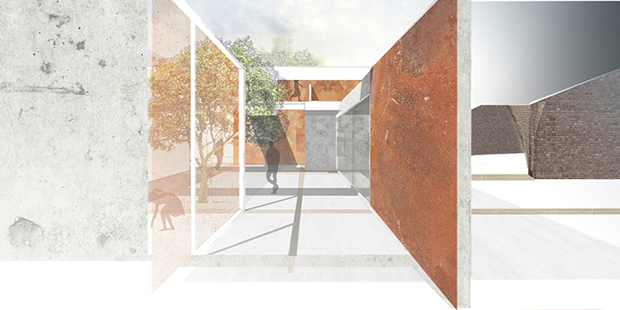 Anne’s project ‘A Social Medicine’ was nominated for Nova.

CSM’s Nova nominees are put forward by their Course Leaders and represent the best talent across the degree shows. Here, Anne provides an insight into the work which earned her a prestigious nomination.

A Social Medicine: Consequences of an Antibiotic Collapse

“My final project at Central Saint Martins asked that I hypothesise a scenario for the year 2025; which was to be focused around the area and communities of Peckham in South London. This scenario was to be determined by my research into emerging political, economic and cultural trends. From this I was asked to determine a programme of uses that would respond to the situation I created and translate my ideas into an architectural language.

What follows is a brief description of my project. In 2020, the World Health Organisation issued a statement that the overuse of over the counter antibiotics was at a critical point. As of 2025, combined with decreasing green space in an ever densifying inner London, the government takes the decision to cut and restrict public access and rights to once common health services.

This proposal follows an initiative set up that aims to reverse the failing spirit of the public communities whilst enriching and enlightening new public research in naturally derived medicines. Embracing the old tradition of the village doctor, or the apothecary – the programme is focused around the practise of pharmacognosy research and its integration of knowledge back into the community. Working in conjunction with biometric data collected from the specific community, the stations work to tackle specific ailments and conditions allowing a larger national network of centres to address more illnesses on a quicker time scale. A shift in responsibility to the public is generated by the introduction of a cultivation garden that serves not only the scientists, but the public who are then encouraged to visit the apothecary for help.

The question of access that drives the scenario also drives the proposal conceptually, a game of hide seek ensues in the pursuit of keeping the station centred on one specific community, who work together to pursue new knowledge. Both literally and figuratively a game of reflections, mirroring and the illusion of the pursuit of space drives the spatial qualities of the tectonic elements creating the volumes”.