The Doc Collective releases new ‘DOCCO’ content every Tuesday, with their first season titled ‘Rituals and Beliefs’ and its premiering series on Iceland titled ‘The Mythic Guide to Iceland’.

We caught up with graduates Victoria Burns, Loubna Turjuman and Virginia Fuentes to hear about The Doc Collective…

DOCCO #1: EP1:An Introduction To: The Mythic Guide To Iceland

So here you have it folks, the debut episode of our very first DOCCO 'An Introduction To: The Mythic Guide To Iceland'. Be sure to check out more episodes every Tuesday. Hope you enjoy !!! 🙂 Comments, shares and likes are more than welcome! #Iceland #Travel #GuidetoIceland #NorseMythology #Mythsandlegends

Posted by The Doc Collective on Thursday, 2 November 2017

What inspired you to create your own digital documentary platform?

Audience appetite for micro documentaries. We were inspired by a combination of things. Initially, speaking from first hand experience, we understood that there is a digital revolution taking place. While audiences are spending more time online consuming content, our attention spans are shrinking, being pulled into different directions. From this terrain, a new wave of micro documentaries are flourishing. We all realised this was something we wanted to be part of and in some ways be at the forefront of.

That being said, we knew we had to carve out a unique approach with our storytelling. In the past, as film-makers we’ve often been faced with the challenge of whittling down a story or narrative to one singular approach. While trusted and proven, it is at times a soul sapping experience casting aside great material in service of ‘the greater good of the story’.
It was in a discussion one day about said frustration that we began to ask ourselves: “What if we were free from choosing one approach? What if we could reveal the different layers and angles of each story through a constellation of films?”

This was our eureka moment, and we quickly realised there was scope to play with developing a new form of storytelling, one through multiple approaches. So in effect creating a layered narrative of a single topic. It was these questions and ensuing discussions that sparked the idea of a ‘DOCCO’. A ‘DOCCO’ is an assorted collection of up to 3 min films exploring different angles to one story. 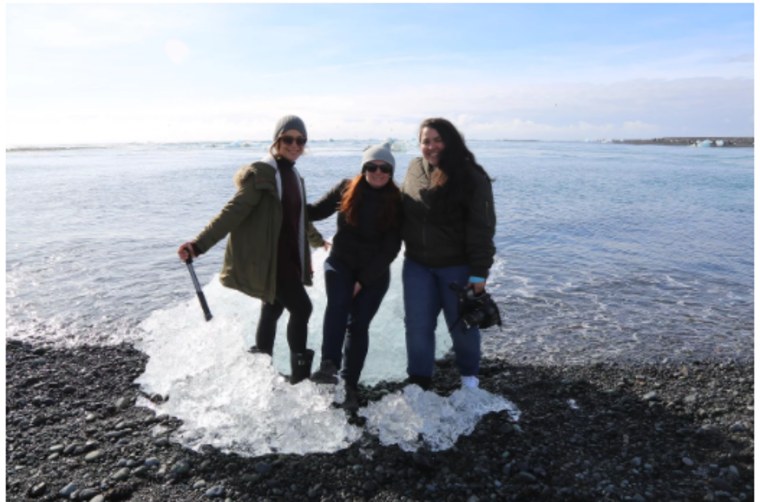 Loubna, Victoria and Virginia on set of ‘A Mythic Guide to Iceland’.

What was the process like of setting it up? How long has this been in the making?

Establishing The Doc Collective has been a long term project, and we’ve tried to be strategic in our planning and implementation. Most of last year was spent researching, filming and editing our various DOCCOS. We launched officially online in November with our first series DOCCO #1 ‘The Mythic Guide To Iceland‘. Since then we’ve released a new episode every Tuesday, both in English and Spanish. This is accompanied typically by a behind the scenes blog post about that week’s film.

What was the inspiration behind your first season ‘Rituals and Beliefs’?

Well starting out we were determined to pursue stories and characters that we were all passionate about. In our first season we’ve captured an international array of locations and unique cultural stories. Though at first glance our selection of content must seem diverse and eclectic, they all share one unifying theme, this idea of Rituals and Beliefs. At the heart of our first season is an exploration of the human experience: the belief systems as well as rituals we enact universally.

Can you tell us a bit about the Iceland series?

We kicked off with our first ever DOCCO ‘The Mythic Guide To Iceland’. The series is an alternative travel guide to the country through the lens of its rich mythological past, in which the central protagonists of the local legends and myths narrate, through first person, their own unique tales. It was such a wild, ambitious and empowering experience to pull off that first ‘DOCCO’. The sense of satisfaction knowing that we oversaw every part of production for the series, is one we’ll always hold dear to our hearts.

“As a founding trio of female filmmakers with a love for all things documentary, The Doc Collective is our very own lovingly crafted digital platform.” — Loubna, Victoria & Virginia.

Can anyone upload content or is first passed through you?

In this first season, we’re concentrating on our own editorials and in house content. But long term, we’ve plans to expand the platform and add on a digital space tentatively titled The Doc Collective Community, where we’ll commission and distribute third party films, that complement our DOCCO brand and pass through The Doc Collective filter first. So definitely watch this space…

What is the purpose of The Doc Collective?

As a founding trio of female filmmakers with a love for all things documentary, The Doc Collective is our very own lovingly crafted digital platform. At our heart,is storytelling with and our mission is to inspire audiences to see the world differently; discovering and spotlighting the sublime mundane.

What do you hope to see emerge from the platform?

While the home of the Doc Collective is no doubt our website, we are also committed to creating tailor made content for our various social media platforms. We’d love to continue building an audience engaged with our content and engage with brands too. We’ve taken charge of our careers and created a platform that we believe in 100%, picked ourselves and seized the narrative.

Posted by The Doc Collective on Tuesday, 7 November 2017

Why did you feel that there was a void for such a digital documentary platform in the market?

As mentioned earlier we were inspired by the digital revolution, the popularity that micro documentaries have gained but felt that there was a space in the micro documentary series market. We wanted to explore that and therefore came up with DOCCOs allowing us to explore our stories from different angles.

What else are you working on/what’s next?

Firstly, there are still more’ DOCCO’s’ to be released, covering a range of subjects from Holy week in Seville to the culture of football chants in the UK to egg vitrification. On the other hand, we’re working up ideas for our second season, earmarked for filming over the summer as well as nurturing partnerships for curated branded content.

Do you have plans to expand the site?

Definitely, fortunately we’ve received great feedback and attention and have got many plans to continue expanding The Doc Collective. For example as we mentioned earlier creating a community for filmmakers to also share their content on our platform and other plans in the works.

Check out The Doc Collective’s official site and Instagram page