As LCC prepares for the School of Design Summer Show, opening on Thursday 18 June, we showcase some of the work being exhibited around the College.

BA (Hons) Graphic and Media Design students can specialise in the area that interests them the most, whilst staying in touch with the constantly changing dynamics of the subject. This can range from typographic media to social design or information graphics to branding.

Students study in an innovative and flexible setting, giving them the opportunity to build on the College’s rich heritage of graphic design education.

At this year’s show, Anna Surridge will be showcasing a project in which she has been looking at children’s books and educational design.

Anna has produced an interactive, visually pleasing set of three books designed for children to enhance their learning at school. Focusing on three simple skills that children are taught in key stage 1, the books help with learning to count, learning directions and learning the time. 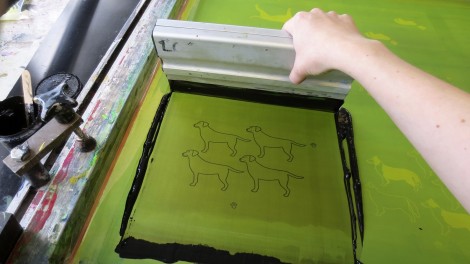 Anna has written, designed, illustrated, hand printed and bound a set of three books to showcase the skills and techniques she has learnt at LCC.

Emily Derrick will be exhibiting a transformers project, beginning with one object and transforming it into a myriad of responses. The project involves the exploration of serious applications for novelty items. 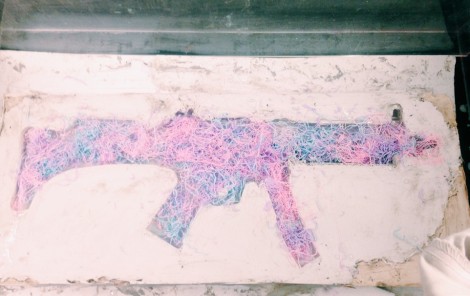 Rifle made from resin and silly string. © Emily Derrick

Her response started with the initial object – silly string – exploring its use during the Iraq War as a means to detect tripwires. She has created a film, using 50 cans to cover a male body, with a soundtrack and found footage of Tony Blair condoning the Iraq War.

The film is accompanied by a real-size AK47 rifle constructed from resin and silly string, and a smaller 3D printed gun, both presented on a constructed light box gun holder.

Marriam Harraz has build upon her dissertation, which covers the political and social significance of graffiti during the recent uprising in Egypt. From her research, Marriam has created ‘A Revolution’s graffiti’. She aims to present the unique role graffiti played in documenting the violence during protests and ‘battles’ in Egypt.

Marriam has captured how graffiti quickly evolved in this period. She demonstrates how walls were used to send messages, actively communicating with the public, and how this became a way to criticise the government.

For his final project, Tom Hutton is focusing on mapping, looking at the changing borders between Israel and Palestine.

Through research, Tom discovered that olive trees in Palestine have continued to be uprooted, so that Israel can expand its settlements.

Aiming to show this, Tom’s final outcome will be four ceramic plant pots holding small olive trees showing that around 800,000 olive trees have been uprooted by the Israeli state in the last six years, Tom’s work will represent the changing borders of Israel and Palestine from 1946 to the present day. Shreyansh’s ‘Devanagari Project’ aims to create contemporary typographic styles for the Hindi language. Hindi is one of the most widely spoken languages in the world with 440 million native speakers, and is the national language of India.

His project is focused at graphic designers and looks at creating visual style guides for designing graphics in Hindi, showing that the problem at large is a glorification of English culture, which dates back to both the legacy of colonialism and technological issues.