In the final part of our Postgraduate Shows 2016 ‘Spotlight’ series, we preview MA Graphic Branding and Identity, MA Graphic Media Design and MA Illustration & Visual Media, part of the College’s Design School. The Design School show opens with a Private View on Tuesday 6 December 6-9pm, and runs from Monday 5 to Saturday 10 December.

Driven by intelligent enquiry and evaluation, this course explores the thinking underlying creative brands and looks at how strategy can drive creative expression. Students’ work deciphers, critiques and challenges the field of branding.

The commercialism of tragedy 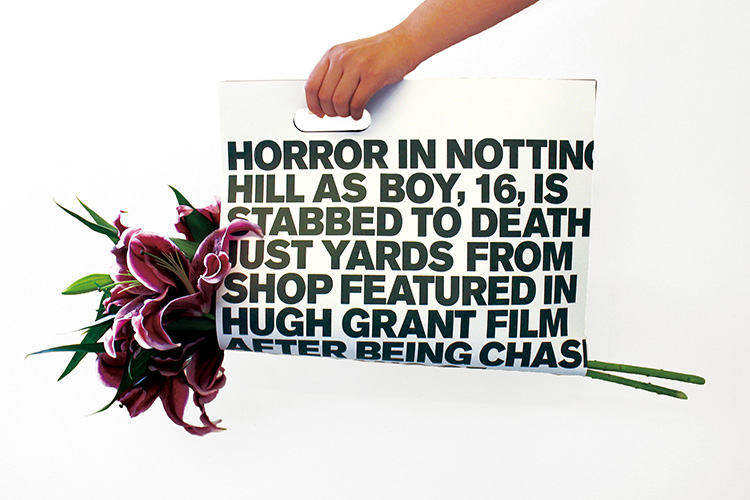 Aya Yamamoto explores the way in which private tragedies are often reported worldwide by the news and social media. ‘Fatal’ is a brand that brings irony to the concept of tragedy and the commercial news criteria. Aiming for a discursive interaction, the retail shop turns real-life tragedies into commerce at affordable prices, with customers encouraged to consume and share their sympathies.

A message to risk-averse parents 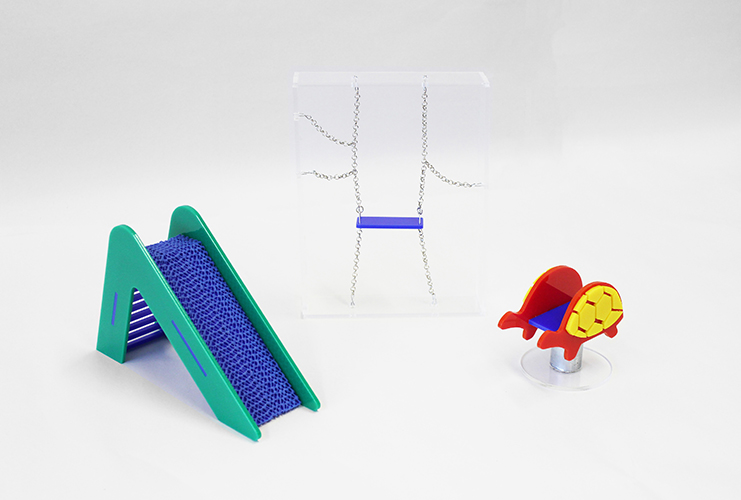 Giulia Ferrini began with the question: Is safety dangerous? The project reflects on our risk-averse society, where an obsession with safety is depriving children of many useful and healthy experiences, turning them into fearful and anxious adults. The brand Over aims to intervene by using provocative and ironic initiatives that serve as stimuli for parents to critically reflect on this issue.

The impact of online shaming Marco Cacioni’s ‘iNHUMANZOO’ (also pictured top) is a project and a movement about shame, formed around recent books on online shaming by Jon Ronson and Jennifer Jacquet. The brand aims to raise awareness about the strength that shame gained through the internet, through comparison with the public humiliation of medieval times and its instruments of torture. It portrays a human zoo, and insists on stereotypes that crudely and ferociously illustrate reality as depicted online.

This course explores the use of graphic design as a critical tool to probe the particularities and complexities of contemporary culture through intensive practice-led research. The exhibition includes responses to literature, politics and architecture through the practices of editorial design, installation, performance, film-making and generative type design. 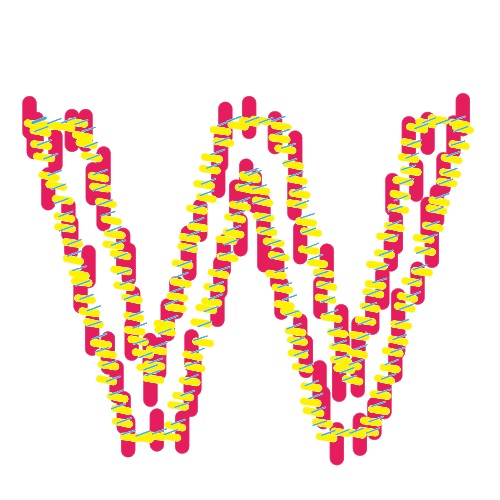 Univers LT Std + Wind + Temperature by Eri Sekiguchi is a speculative typeface generated by a type modifying system. This project began as an experimental typeface exploring new possibilities for generative typography, but when its designer began focusing on planeless text communication in digital media, local environmental data was used for constructing the system.

The journey of brutalism 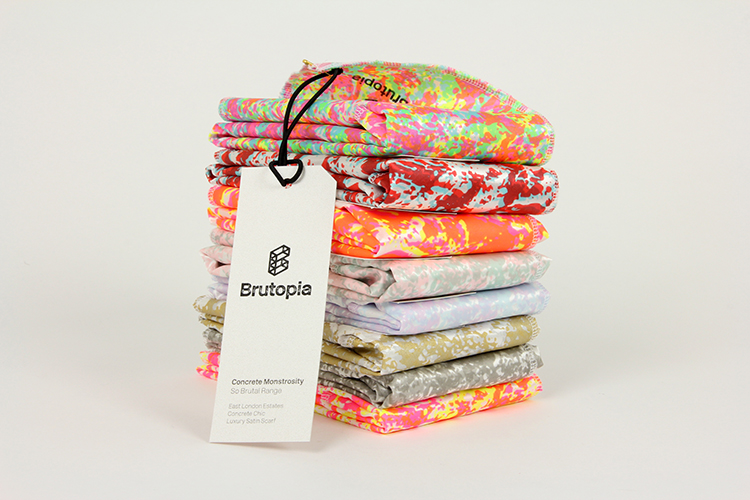 Laurie Jackson’s ‘Brutopia’ explores the rise in popularity of brutalist architecture from its contentious past to its recent cultural resurgence. The project highlights the way in which contemporary developers risk reducing the cultural heritage of these environments to a mere commodity in order to capitalise on their image. Jackson’s work emphasises the symbolism and irony inherent in the transformation of these structures from dystopian ‘concrete monstrosities’ to ‘luxury’ homes, representing the complete antithesis of their intended purpose and epitomising London’s current gentrification and housing crisis.

The language of gentrification 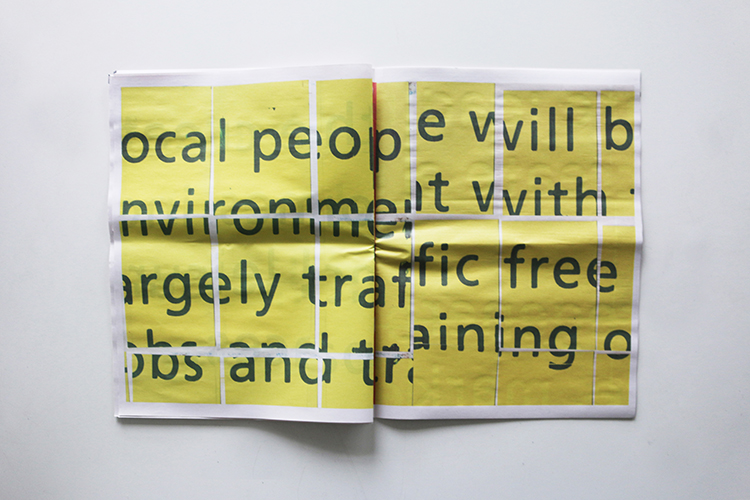 Nadia Speranza’s work also examines gentrification, specifically looking at its relationship with language. Speranza asks: In what way do graphic forms allow for different interpretations of developers’ and protesters’ messages related to the redevelopment of Elephant and Castle? The project is intended to demonstrate disruption to the meaning of language by interfering with its graphic forms and context, and reconfiguring the author’s original narrative. For example, the Southwark Council billboard is translated into the identity of protesters’ stickers found in the neighbourhood. 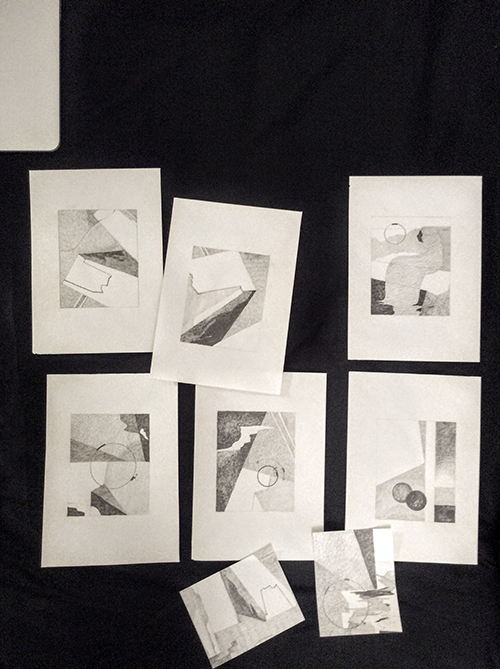 Work in progress by Rohit Sharma

Rohit Sharma’s ‘The Parallel Self’ explores the meaning of an instance; what is it, what is contained within it, and what is its significance to the fabric of time and space? The project talks about a jump into a different universe where our ‘self’ exists with completely different – or maybe the same – set of experiences; our Parallel Self. ‘Between the lines’ by Ximena Martinez Moreno is a graphic narrative inspired by the fluid concept of identity and the transformation of Ximena’s own identity in a new place. The project uses storytelling to show that an identity unfolds over time and can significantly change from its original state. 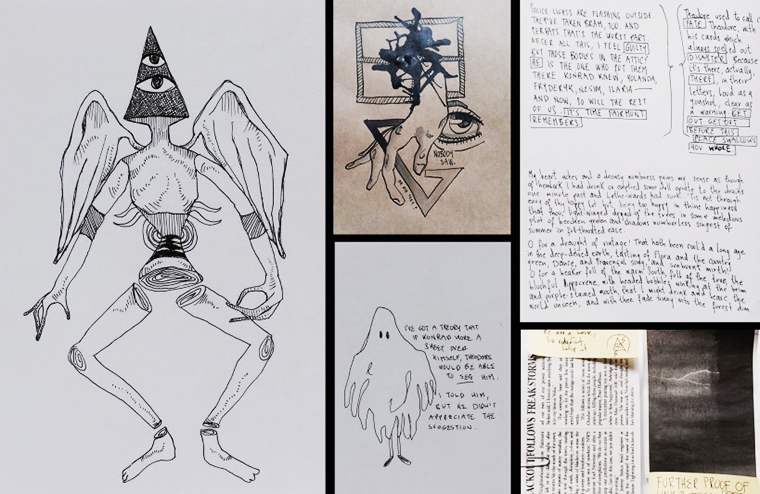 Bel Aguas Garcia’s project explores the role of the illustrator in fictional worldbuilding. Using ideas of simulation and simulacra, the work uses fictional artefacts – which purport to be real – made by fictional authors to invite the viewers into a pseudo-reality in which the story takes place.

Book for a Postgraduate Open Day