Review and video // Journalism Guest Panel: So You Want to be a Media Entrepreneur?

On Tuesday 27 May London College of Communication opened its doors to the latest Journalism Guest Panel, consisting of entrepreneurs who have independently established their own businesses and built their brand. BA (Hons) Journalism student Max Gayler reports.

Dom Bradbury initially set up his website after coming home one night and realising there was no single platform available online for people to “simply moan on”. Seeing this gap in the market, Bradbury bought a domain name and built the website from scratch, amassing 33,000 Twitter followers in five years.

Dom had a lot of advice on making a living from blogging, explaining that he makes money not from the website itself, but from the opportunities presented to him off the back of the website’s success.

Dom’s main piece of advice was to “never do anything for free”, explaining that not only does it take well-deserved money away from you but it strips your brand of its worth. Renowned Films founder Zeon Richards agreed, stating that “if they’re getting paid, you should be getting paid”. 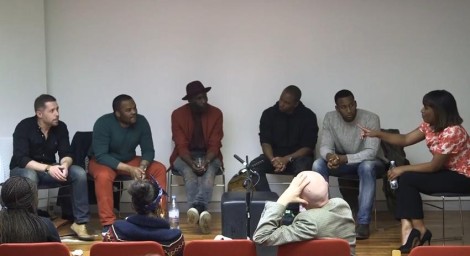 Celebrity news website Pappzd founder Uche Chukwu went into fine detail on how this small independent business went from being a tiny speck on the map to a worldwide source of UK urban news.

Uche told the student audience that a key to making it is to be brave, as that is what will make people choose to click on your link over someone else’s. Pappzd had its big break when a sex tape of N-Dubz singer Tulisa was sent to Uche and he decided to publish it.

Duane Jones of Renowned Films played an important part in the establishment of Radio 1Xtra in 2002 whilst working with the BBC. Now Duane presents his new project that gives opportunities to young and upcoming talent, focussing on the urban and grime scene.

Welcoming people from all areas of the arts, Duane’s main tip for the audience was to network, citing this as the main reason for his success, aside from the opportunity given to him at the age of 16 to work with the BBC.

Zeon Richards had similar words of wisdom for everyone, telling them they “should surround themselves with people who are a lot more successful”, never settle for what they achieve and keep striving towards making their business bigger and better.

Wretch 32’s contributions demonstrated how he has succeeded in building his. Wretch, originally named Jermaine Sinclair, takes care in what he says, telling people his mind is constantly working and he keeps himself up at night because of his motivation to keep thinking of new ideas – proof of the level of motivation you need to make it in this fast-paced, dog-eat-dog industry.