In total there were nine speakers at the summit, covering a variety of topics around diversity. There were representatives from many different points of view and backgrounds: employers supporting minorities and those with disabilities, those affected by a disability and those who are trying to help them. 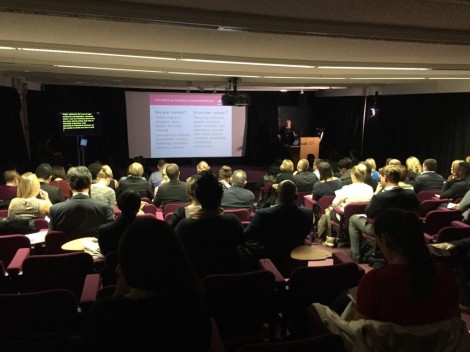 The first thing to attract my attention was a TV screen and a person typing at a keyboard next to it. Everything that was said by the speakers was recorded on the screen.

Later on, in the summit, Beth Abbott, Ai-Media, explained how they use live captioning at different live events to make everything that has been said available and easily accessible for those people who have hearing difficulties in the audience. It also makes it easy to follow the event for everyone all over the world, across different devices and platforms.

Finally it provides detailed notes of the event for further evaluation, which I thought was a great example of using technology in favour of people who might have limited access to these events.

Another great example of using technology to make communication inclusive was represented by Robin Christopherson, Head of Inclusion, Ability Net. As a person with severely limited sight, Robin provided us with an insight into his life and demonstrated how technology can make his life and the lives of people with similar disabilities easier.

We can see it with Apple for example, in devices such as iPads and iPhones which can be adapted for people with disabilities by using voice control or zooming the screen. Alternatively, intelligent apps can use the device’s camera to identify for a person what is in the picture at which the camera is aimed.

This is a really powerful technology that allowed Robin to say, “Don’t think about disability – it is Digital Inclusion.” 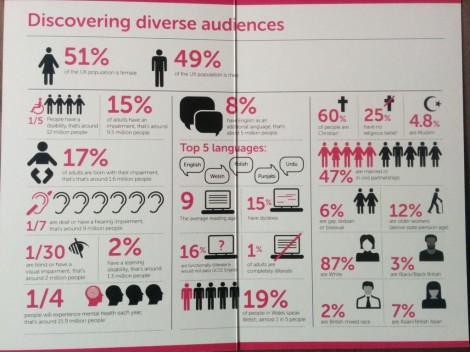 Graphic from the CIPR highlighting diversity in the UK. Image © @ludhi85

Those who attended also had an opportunity to listen to such people as Simon Hailes, Director of External Communications, Barclays Personal & Corporate Banking. Simon spoke about Barclays’ partnership with the Government on a campaign called Disability Confident to encourage employers to hire people with disabilities.

This campaign is not limited to people who were born with disabilities but also those who developed them during their lives; like soldiers who have done military service in conflict zones, a lot of whom struggle to find a job afterwards. Disability Confident and their partners are doing a great deal to help them find work and encouraging employers to hire disabled people.

I found a speech by Ross Linnett, Founder & CEO of Recite Me, particularly useful. Recite Me is a website that allows users to customise websites they visit, across any platform, and translate them into 52 languages. This is particularly beneficial for dyslexic people, like myself, as it allows them to change background colours, adjust text settings to improve readability, and so better understand online and mobile content.

The CIPR Diversity & Inclusion summit encouraged everyone to think about the needs of different people and educated us on how to improve communication with disabled people to reach a large and diverse audience.

I just want to say thank you to the CIPR for this event and the opportunity to learn so much about the importance of inclusion.

You can catch up with the event on Twitter at #DiversityPR