Lorenzo Davitti and Wajeeha Abbasi are among 20 local artists and designers who were chosen to illustrate a clue for the game. 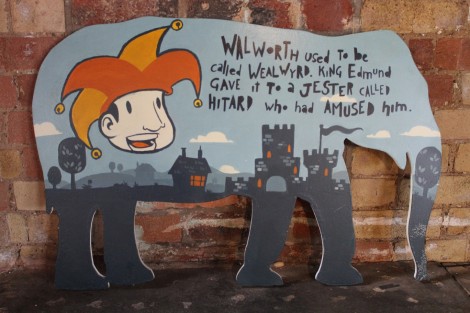 Lorenzo Davitti’s elephant was inspired by the history of Walworth.

City Hunt comes to Elephant and Castle on Saturday 24 October, with special kids hunts happening on 24, 25 and 28 October.

The interactive urban game will take participants through the streets of Elephant and Castle, tracing the rich history of the area in a bid to win one of many exciting prizes. Turning up along the way will be some of the characters who have animated this part of London in the past.

Prizes include a £250 bike voucher from Cycle PS, Zombie Apocalypse Survival Training and a meal at the Hilton Hotel, but there are over 100 prizes to be won in total.

You can sign up at www.cityhunt.co.uk or pick up a map from the start station at Artworks Elephant.

You can see more work by Lorenzo, Wajeeha and their fellow students at LCC’s MA Illustration and Visual Media 2015 Postgraduate Show, which opens with a Private View on Wednesday 4 November. The show runs from Thursday 5 – Saturday 7 November at the College.