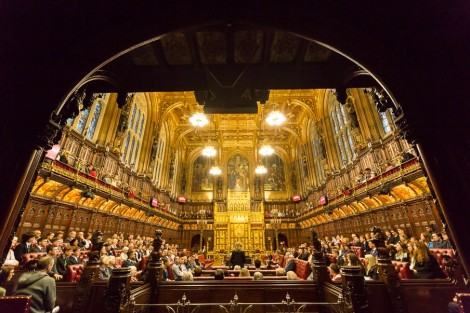 Students from the BA (Hons) Public Relations course at London College of Communication have taken part in a national debate in the House of Lords.

Second-year students Tanya Kropacheva and third-year student Ire Ife-Alabi made speeches in the debate which was broadcast live on BBC Parliament on Friday 28 November.

The inter-generational debate focused on the extent to which government might deploy digital technologies to improve the democratic process. 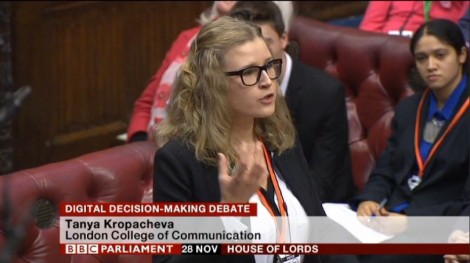 Tanya, putting forward the view that online channels enable citizens to take part in continuous democratic dialogue and provide for multiple voting opportunities, was selected as one of the nine key speakers on the day, and the only university student from the UK to be selected as a key speaker.

Ire spoke from the floor of the House as they were called upon by the Lord Speaker, Baroness D’Souza.

The students previously took part in a ‘talking day’ at LCC, run by the English Speaking Union – one of eight which took place at universities across the UK in October and November.

Tanya and Ire impressed so much on the day that they were selected for the live event.

“This was a tremendous achievement by LCC BA Public Relations students, and I am proud of all who took part.

“Tanya, Hayden and Ire represented the College so well and gave us a high profile in the political arena. My congratulations to them all.

“We’re always looking for great additional opportunities for our PR students to get involved in, alongside their regular course activities.

“This is something they are certainly going to be able to include on their CVs and talk about to potential future employers who will be impressed by their initiative, commitment and drive.”

You can watch our students in action on BBC iPlayer until Friday 26 December, or, if you are a UAL student or staff member, thereafter from Box of Broadcasts using your University log-in.

This annual debate aims to engage UK citizens with the Parliamentary process and, in particular, promote understanding of the House of Lords, the UK’s ‘grand revision chamber’.

It is only the eighth time in the 800-year history of the Lords that members of the public have been allowed to sit on the famous red benches – another feather in the cap for LCC students!