We take a look at how the students used graphic and media design to make the Great Green Wall famous and gain support and investment to combat climate change.

The Great Green Wall is a multi-state pan African project to stop Sahara creep by building a number of green projects on the southern line of the Sahara Desert. Stretching 8000km, it aims to prevent desertification, and in turn, protect rural heritage, restore biodiversity and improve living conditions for the local population.

Although desertification can be caused by climate change and the encroachment of sand dunes on land, human activity such as unsustainable farming, mining, overgrazing and cutting also has a significant impact. On degraded land, the local people can no longer grow crops and make a living, leading to further poverty and socio-economic instability in the drylands of the Sahara.

Monique Barbut, Executive Secretary for the UN Convention to Combat Desertification warns that without the Great Green Wall, “in the next 30 years, 60 million Africans would move to North Africa and Europe…if 1 million is a crisis, what do we do with 60 million?’’

The Great Green Wall project was briefed by venturethree as part of the industry practice element of the BA (Hons) Graphic and Media Design course. Over 70 students chose the brief and 10 were shortlisted to exhibit their outputs at venturethree’s headquarters.

In her call for support, the UN’s Monique Barbut asked students to unite against climate change and help the public wake up to the subject of desertification. She said “the dream is to bring life back to the land. Growing a line of trees and plants, supplying food to eat so [the local people] can all stay together and don’t have to move. Growing a Great Green Wall that will stretch across Africa could be the biggest human endeavour ever… and one day be a wonder of the world.” 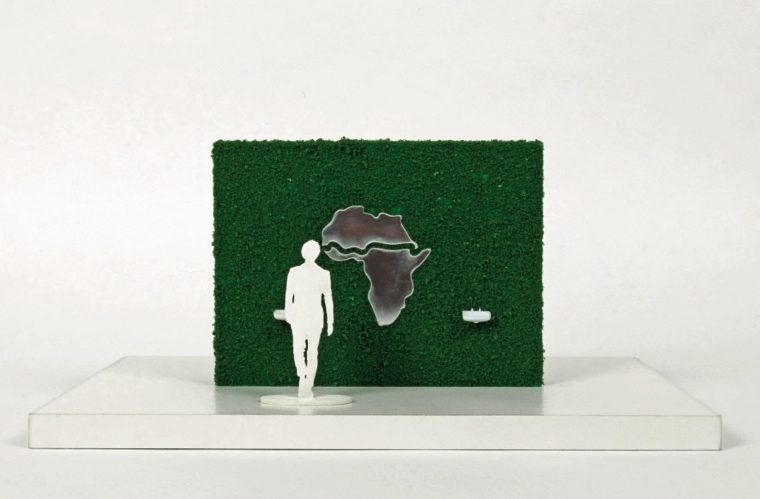 “Live Green Wall is a 3×4 metre living plant wall with a water fountain, which will inform users about the Great Green Wall. It will also provide a free source of drinking water to people in the heart of London and irrigate itself with leftover water from the drinking fountain, whilst reducing the environmental damage caused by disposable bottles. Live Green Wall will also improve air quality in crowded places, increase humidity, reduce airborne dust and carbon dioxide levels, absorb noise and improve wellbeing. 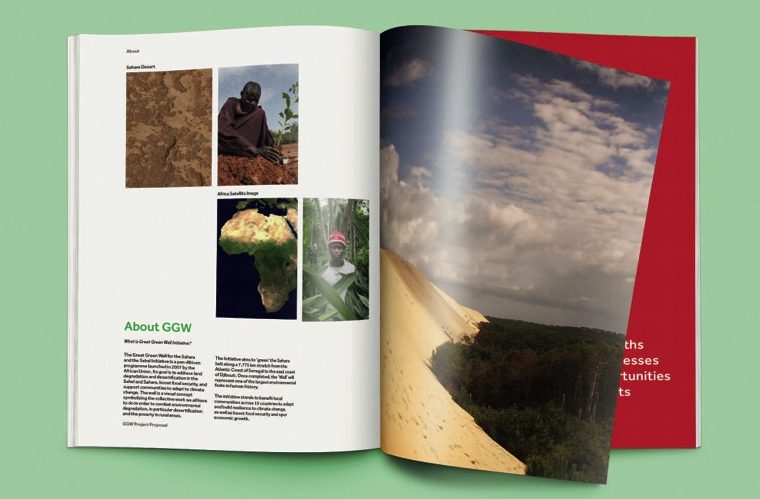 “The first wall will be located in London’s Jubilee Gardens engaging tourists, bypassers, cyclists and runners as the target audiences. The project would be supported and sponsored by the government, or private companies. MP Boris Johnson, has already stated the need for initiatives like this, saying ‘[i]f the place is generally getting hotter and people are going off buying bottled water, I think we should have a new era of public fountains. Delivering cleaner air for London is a top priority for me.’

“If the project provides good results in London, Live Green Wall can then be implemented across the biggest western cities, helping on a local level, whilst spreading the global message of the Great Green Wall.”

This is Big, Grace Anthony 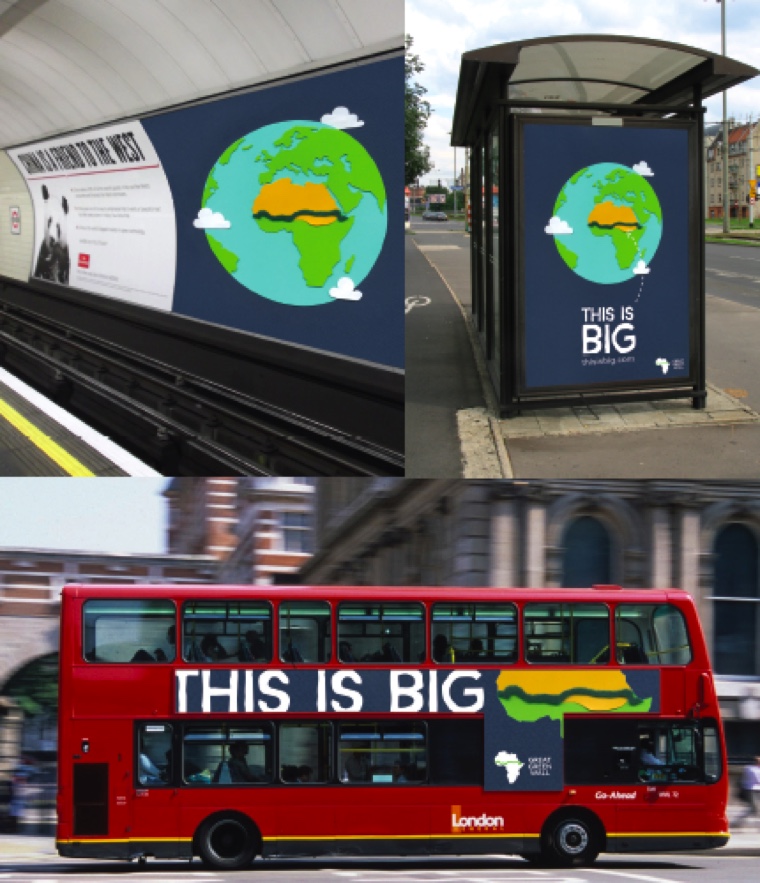 “The Great Green Wall is Big. Once completed it will be the largest man made structure on the planet. It is Big in other ways too. The environmental, social and political impact will span the width of the continent and secure local communities in the participating countries. Protection of fertile land, more secure farming incomes leading to lower poverty rates, reduction of violence and terror and an increase in education and health will be the resulting benefits. Big concepts, Big scale, Big impact. This is what Big is.

“The campaign would be rolled out as a series of applications: 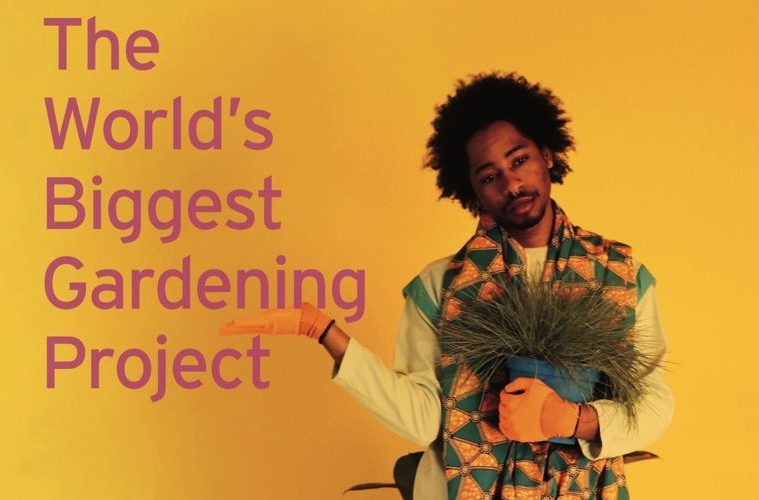 “This project aims to target a young, tech-savvy audience who are always online and connected. This demographic care about consumer culture, online video content and TV, and have the power to share brilliant ideas. Unfortunately, they’ve become wary of social/political/environmental campaigns and often assume that they are donation motivated.

“This campaign positions the GGW as a creative phenomenon through a subversive strategy, undercutting the cynicism some may feel with a more conventional approach. We’re going to spread the word about a badass new television series called The World’s Biggest Gardening Project. The Great British Bake Off and similar reality TV shows regularly receive 10 million+ viewers, proving their widespread popularity. By placing content about the GGW in media attached to a show, it will be easier to include educational material in an unexpected, entertaining way.” 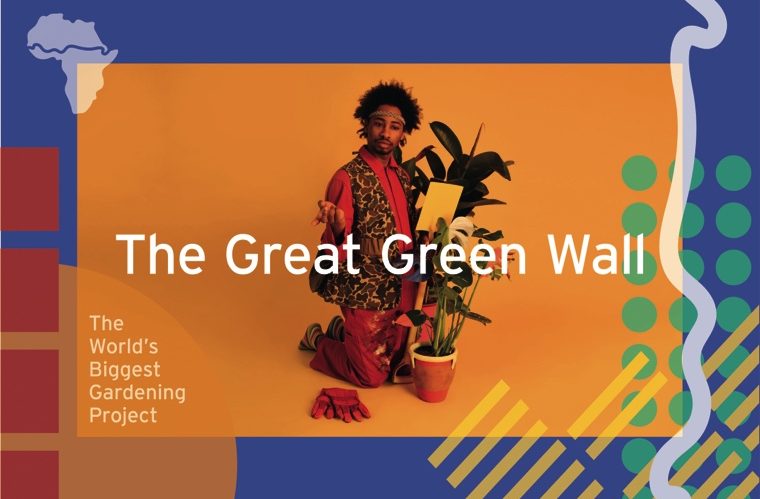 “The World’s Biggest Gardening Project will use a variety of social stunts and offline print materials to ensure a mass audience reaches the educational website. Once our unsuspecting audience clicks through, they will learn about the REAL gardening heroes in the Sahel. The public will discover the GGW is not simply a reality TV show, but a huge climate change initiative. 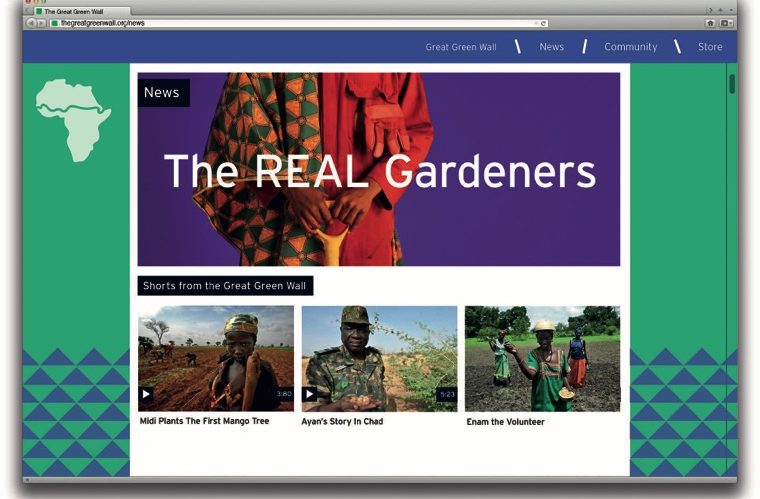 Original content, such as short films of individual stories in Africa, will spread through social channels, and the website provides an opportunity for extended engagement, with videos, news, interactive maps and a shop with branded gardening products. The campaign could eventually be extended by the United Nations into a documentary on the initiative.” 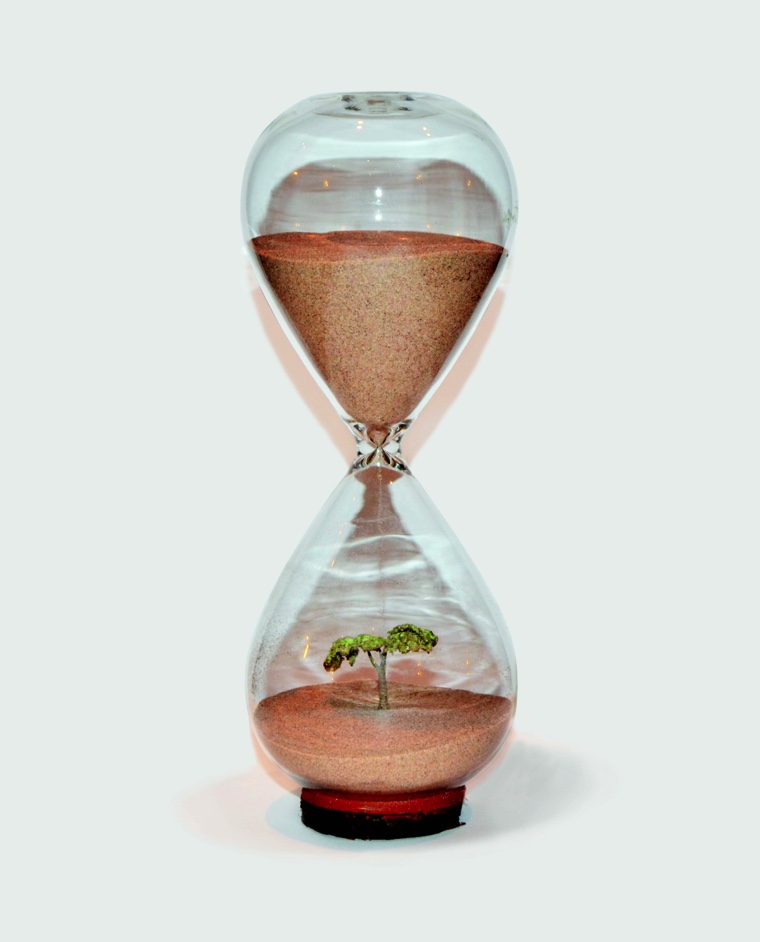 “With the majority of awareness campaigns today, all you see are masses of leaflets, posters, stickers and if you’re lucky, a teddy bear. But none of these really stand out, as they all follow a standard route. This is what I didn’t want to do; instead I visualised a fun and thought-provoking way to explain the Great Green Wall.

“The idea was to create a piece that would speak for itself. Something that constantly changes as time moves on. I wanted it to symbolise the sand, time, trees and soil, as well as to show the versatility of trees and plants (oils, glue, perfume etc.) It led me to the idea of the hourglass. Within the hourglass, sand acts as the Sahara Desert, the tree represents hope for the future of Africa and the seeping sand symbolises time. 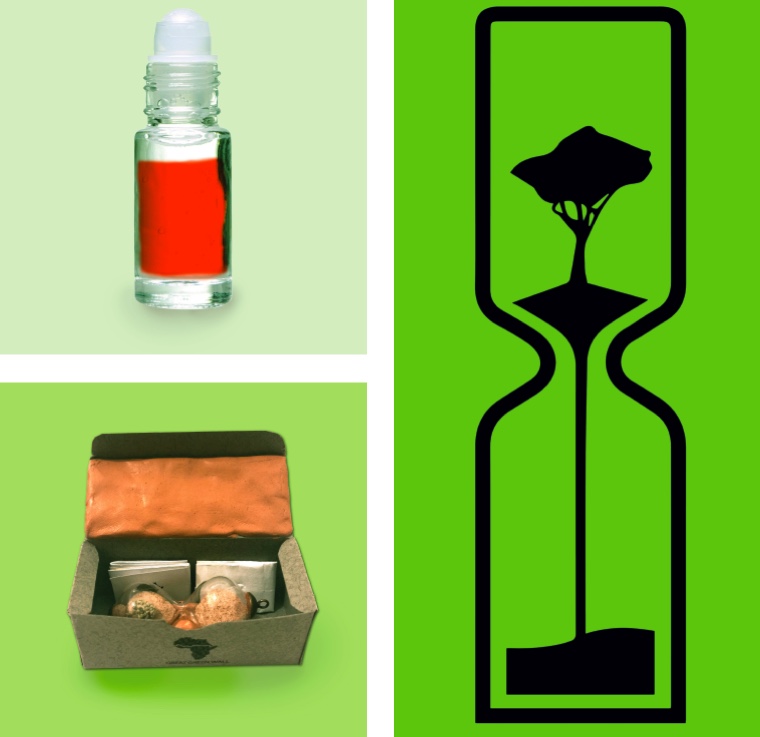 “Instead of leaflets and posters to accompany the hourglass, I have created a gift box, including a mini hourglass that can be used as a key chain, figurine, necklace etc. As well as a 3ml vial of fragranced oil made only from plants & trees. This will hopefully engage with the viewer and prompt them to think about what they can do to support the GGW initiative.”

Explore Your New Wonder of the World, Christopher Ong 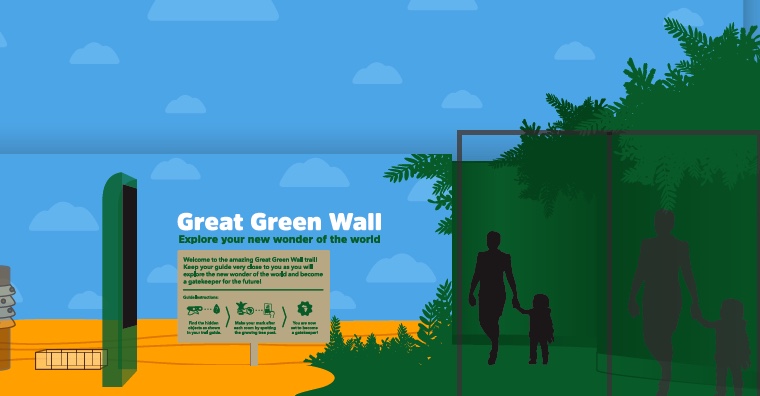 Christopher Ong, Explore Your New Wonder of the World

“As the Great Green Wall is a long-term project, its completion will ultimately be seen by the next generation. Therefore, this concept is aimed at 5-8 year-olds, appealing to the adventurers, explorers and kids with strong imaginations. By planting seeds of information in these young minds, we’ll create gatekeepers of the Great Green Wall – making the new wonder of the world famous and memorable. 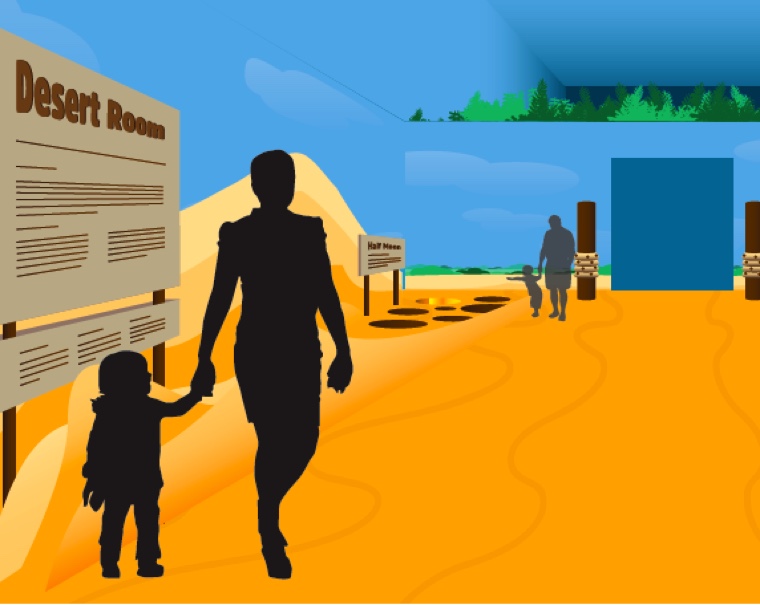 Christopher Ong, Explore Your New Wonder of the World

“‘Explore your new wonder of the world’ is an exhibition for the younger audience, encouraging them to get involved with what’s happening now and for the future. Located in the Science Museum’s Media Space, this exhibition will be on show for an initial four-week period during school holidays, and then on a yearly- basis to exhibit further developments on the overall project.”

Congratulations to Beth Johnson, Sumi Khan and Christopher Ong whose ideas have been taken forward to be developed and realised by venturethree and the UN.