Artefact magazine, produced by students on LCC’s BA (Hons) Journalism course, has been shortlisted in two categories in the Stack Awards 2015 for independent magazines.

These awards are open to all independent publishers and their contributors. Artefact has received nominations in Launch of the Year and Cover of the Year categories, the latter for the Greed issue, and is shortlisted alongside high-profile publications including Eye, Port and Intern. We caught up with BA (Hons) Journalism student Hani Richter to find out more.

Can you tell us a bit about your role on Artefact?

For the first term, I’m in the production team. This role involves deciding which articles will go into the magazine and how many pages they will take up – discussing the format. Everyone in the team makes sure the articles all complement each other on the page and look good.

What did you expect from the experience of working on the magazine? And how would you describe it now?

From the beginning we knew that we would be running the news platform for all six Colleges. Our academic staff helped us ease into it and we are all very much settled in. I thought it would be very fast-paced and it has been.

On the first day back [after the summer break] we went straight into it and had to pitch ideas straight away. We were told our deadlines and had to deliver. I’m used to it now, so I adapted and the experience is exactly as I expected – meeting my expectations. 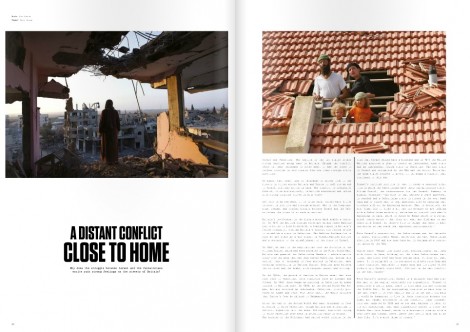 A Distant Conflict Close to Home. Article about Britain’s response to the conflict between Israel and Palestine by Hani Richter, images by Heidi Levine.

Can you tell us about one of your personal highlights so far?

A recent memorable moment was when I got an interview with a great journalist, who I really admire. I emailed his press office and got an email back with his number and a time to call. My time slot was 10-15 minutes. I was really not expecting a reply, I just tried and luckily it worked– it was a really great experience.

And how does it feel to be shortlisted by Stack?

Being nominated for the Stack Awards is great. Everyone in the newsroom brings unique, interesting content to the table and it’s great that people are noticing.

“When we started Artefact, we said we wanted it to be judged not as a student magazine but by the standards of professional publications. These nominations show that we can hold our own with the best of independent publishing and show what great work our journalism students are capable of.”

The results will be announced at the awards ceremony at The Book Club in London on Monday 30 November.

Tickets for the ceremony are currently on sale for shortlisted magazines, and any remaining tickets will go on general release on Monday 9 November.