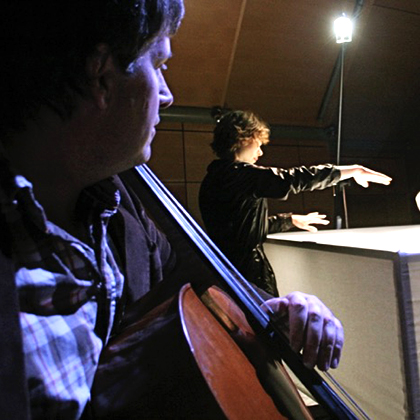 Dr Thomas Gardner is a composer, improviser, teacher, computer programmer and academic. He is Course Leader for MA Sound Arts and a Course Tutor for BA (Hons) Sound Arts and Design at London College of Communication.

Thomas' work is particularly concerned with the relations between sound art and music, focusing on group interaction and the kinds of changes introduced by electronic media.

His work with the performance group Automatic Writing Circle (AWC), which he co-founded in 2007, has been a key way to explore these issues in practice and consists of the composition of new work, improvisation, the design of instruments and software, and the exploration of new performance contexts. Recent pieces have been premiered at the Sonic Fusion festival and at Parasol Unit, Foundation for contemporary art.

The theoretical context of this work has been expanded in a series of recent publications: 'Music, Sound Art and the rehabilitation of schizophonia' in Embodiment of Authority, published by Peter Lang. Forthcoming work includes the joint editorship of an issue of Organised Sound and a new book on Sound Art and Music with Dr Salomé Voegelin.

Thomas’ compositions have been performed internationally at venues including: the Sibelius Academy, Dartington Festival, Institute of Contemporary Arts (ICA) in London, Alte-Schmiede Vienna and the Salla Chavez in Mexico City.

His cello piece 'Lipsync' has been performed across the UK and is included in the anthology of sound art to be published by Routledge. His collaborations include pieces for the choreographer Jeremy James, and permanent installations in the UK, Eindhoven, Madrid, Frankfurt  and Holland with Turner prize winning artist Martin Creed.

Thomas studied the cello at the Guildhall School of Music with Stefan Popov and in masterclasses with Ralph Kirshbaum and Lluis Claret. As a cellist he gave first UK performances of works by Feldman at the ICA and the complete works of Walter Zimmerman at the Blackheath Concert Halls, also working with the founder of the Indo-Jazz fusion John Mayer and the Chinese flautist Guo Yue.

He was a member of the contemporary music groups Circle, Metanoia and London New Music giving performances which included Saties’s 18 hour 'vexations'. His PhD at City University was supervised by Professor Simon Emmerson and Professor Denis Smalley.

As a computer programmer he was head of systems analysis at the Design Council of Great Britain, where he designed the international materials database linked to the European Space Agency.