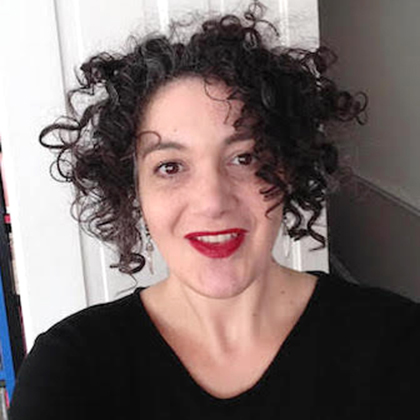 Daniela Cascella is an Associate Lecturer on MA Sound Arts. Daniela writes and researches forms of criticism that inhabit, echo, and are haunted by their subjects: literature, voices, and fictions of the self.

Writing in English as a second language, writing as a stranger in a language, she is drawn to unstable and uncomfortable forms of writing-as-sounding, and in the transmissions and interferences of knowledge across cultures.

Daniela's writing has been published in books and exhibition catalogues internationally, on Koenig Books, Errant Bodies Press, Cura Books, raster-noton among the others; and in art, music and literary journals such as Gorse, 3:AM Magazine, Music & Literature, The Los Angeles Review of Books, The Scofield, Numéro Cinq, The Wire, Organised Sound, MusicWorks, The Journal of Sonic Studies.

She was a contributing editor at minor literature[s] where she initiated and edited (2016-18) a new section called Untranslated, publishing reviews of and responses to books not translated in English.

Her research often expands beyond the book format into performances, audio pieces, curatorial and editorial projects and collaborations with artists, writers, and musicians. Details on these can be found here and here.

In 2018 she was awarded a C3RI scholarship to undertake doctoral research in the Department of Art and Design at Sheffield Hallam University, where she is developing a project around the idea of 'chimeric writing': critical writing as artistic practice, in relation to sound and bilingualism.

Between 2013 and 2018 she was Assistant Professor in Writing in the MA Fine Art at the University of Bergen, Faculty of Fine Art, Music and Design, where she supervised projects by students at the intersections between writing and art, and developed teaching skills to work with students who write in English as a second language.

She was a Research Fellow in the School of Arts at Oxford Brookes University (2013-2015) and has taught a workshop on Sound, Listening and Language in the MFA Fine Art, Goldsmiths University of London (2014-2016).

Prior to her move to London in 2009 Daniela worked in Rome, Italy as an art critic and curator specialising in sound art, producing and curating projects for museums and public institutions such as the National Gallery of Modern Art, Rome and the British School at Rome.

Between 1999 and 2008 she was contributing editor of Italy's leading music magazine Blow Up, for which she wrote a monthly column on sound and the arts as well as articles and reviews on experimental music.