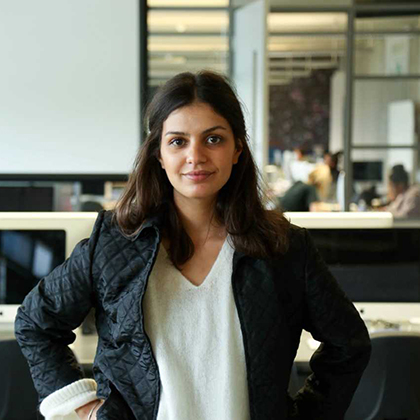 Aurore Kaddachi is an alumni of BA (Hons) Journalism at London College of Communication. Aurore's work has focused on NGO’s and charities. She co-founded The Berlin Refugee Project, a film project produced by LCC students about refugee journalists.

What did you study at LCC and what year did you graduate?

Where are you from in the world?

Why did you choose to study this course and why LCC?

I always wanted to study journalism and I knew that LCC was a leading college for creative minds. I thought it would allow me to thrive and challenge myself.

Where are you working at the moment and what are some recent interesting projects you’ve worked on?

I worked as Deputy Environment Editor at The IPF, Journalism Intern at the Thomas Reuters Foundation, as Video Producer and Director at Asylum Aid, and as a Digital Editorial Assistant at the Daily Express and the Daily Star. Whilst on my BA I worked on some pretty cool projects.

One of them was the production of a short film, documenting the progress of participants from the Refugee Journalism Project. The project aims to help and support journalist refugees to re-establish their careers in the UK. The documentary was screened at LCC in March 2017.

The people I’ve met, the incredible facilities and the constant push we received from our tutors.

To be confident with themselves. If they got into LCC it was for good reason; they should always be willing to push the boundaries.

Name three things you couldn't be creative without:

What drives you to succeed?

Where in London do you (or did you used to) go when you need a little inspiration?

JOE was established a few years back in Ireland and is still one of the largest digital publications in the country. The London office is equally growing and has emerged as a trusted news platform.