A group of LCC’s postgraduate students recently visited the Imperial War Museum to take part in the Reading an Exhibition workshop.

Catherine James from Academic Support led the group to the Peter Kennard: Unofficial War Artist show to discuss issues relating to curating and reading an exhibition.

Peter Kennard is one of Britain’s foremost political artists and has been a prominent voice in the anti-war movement for over 40 years. His photomontages were perhaps most famously used in the Campaign for Nuclear Disarmament in the 1970s-80s, but he has gone on to visually criticise other conflicts, including the invasion of Iraq in 2003.

This retrospective exhibition therefore provided a great opportunity for the students to get their teeth into some of the problems of curating such a political and often radical show that challenges the approach of the museum itself.

The exhibition brings together four decades of work, which contains stark and graphic imagery, often using different media from paint and photographs to newspapers, always questioning the nature of conflict and the establishments that send people to war. 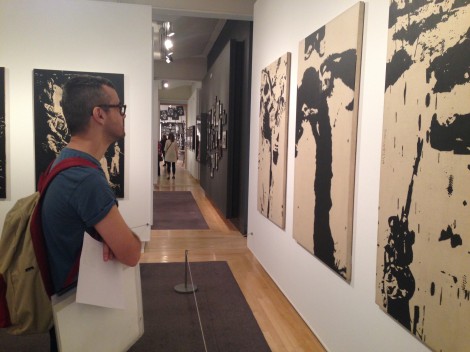 After an introduction to the work and some curatorial concepts, the students were encouraged to think about the flow and trajectory of the exhibition, the way it had been installed and what kind of audience it might appeal to.

The mix of material and information in the rooms was discussed, with some feeling that the space was too small for the wealth of material, and others arguing that this added to the uncomfortable and layered experience of viewing the work – demonstrating how problematic exhibitions can be to curate!

The visit was part of a series of Academic Support Workshops arranged by the Graduate School.