MA Arts and Lifestyle Journalism students at London College of Communication have released their second edition of Oppose magazine – a zine with the motive to tackle gentrification in London and around the world.

Issue two takes us on a visual, emotive and satirical journey as we learn about the many locations around the world being re-generated, bulldozed and stripped of all culture and community.

Issue two is turned up a notch, with outside contributors bringing new and personal stories to Oppose readers. Editor and journalist Dalia Dawood, and Illustrator, Alfieyah Abdullah, talk us through the creative process and ethos of Oppose magazine.

What is the driving force behind Oppose?

Being a group of journalists on MA Arts and Lifestyle Journalism, we wanted to write about something we were all passionate about, and the problem of gentrification was the topic that united us – that was the main driving force. Can we do it, and get people to engage with what we’re saying?

What message do you hope to get across?

You see the pattern happening everywhere, individuality is being lost because developers and governments are turning cities into places that continue to privilege the rich (usually white, middle classes) and disadvantage the poor (usually from ethnic minority backgrounds).

How does Oppose get this message across, how do you reach wider audiences?

By taking the piss! Though gentrification is a serious issue, and affects many people negatively, we also wanted to stop people in their tracks by pointing out things that they may see happening, but probably aren’t being talked about in such a direct and provocative way in the media – like how hipsters are taking over the world (sort of), and white rich kids are ruining multicultural spaces.

We are also a very diverse mix of people from all over the world, so the voices in our first issue showed the damaging impact of gentrification from our respective countries – Singapore, Ecuador, Italy, and London. We hoped that would help more people to relate to our message.

With issue two, we did the same thing by involving more contributors outside of our group of writes, people who have been directly impacted by gentrification or who could creatively and artistically express their views on it through poems, art pieces and photography.

How can we get involved and petition against gentrification?

Our interview with artist duo Kennardphillips in issue two has some great advice about how to do just that, make sure you read it (available at the LCC’s Postgraduate Shows from 14 November).

An obvious answer would be to join marches and protests, which are always effective, but even if you just pick up a pen to write or draw, creative expression is one of the highest (and most cathartic) forms of protests, to us. 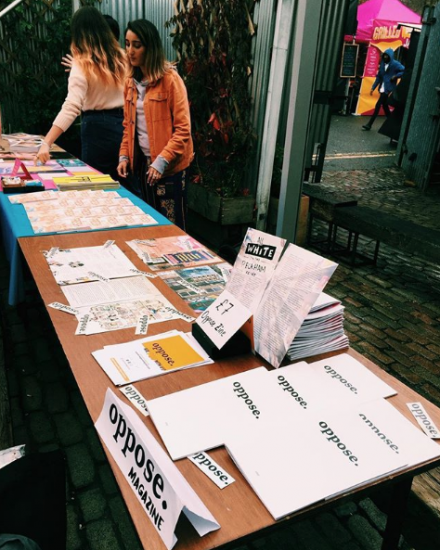 Talk us through the creative process?

It started with just throwing ideas around; things we’ve read or seen that we think would be interesting or funny to talk about. Gentrification is serious but we also see the potential to poke fun at it, so a lot of our content decisions are based around getting that balance right – but always approaching it creatively.

The artistic process is based on what that content will be, and it’s hugely important to Oppose’s visual identity – we rely on the amazing talents of our illustrator, Fie (Alfieyah) who comes up with great, lively visuals that make the pages pop.

Alfieyah: Most of the artwork in Oppose is illustrative and created digitally. Photography does play a part; especially in our centre spreads and as accompaniment with certain articles. At the start, we knew we wanted to stay true to the ‘zine-y quality’ and make it aesthetically dynamic but not too ‘formal.’

Overall, it’s usually more of a trial and error process. If the writing inspires me, or if I feel like the article lends itself to large illustrative pieces (like a few of the pieces do in Oppose 2), I just start drawing.

What facilities are available to you at LCC and how did this help to produce Oppose?

We’re so lucky to have the printing room and the brilliant team who help us out when we want to test print or do a bulk order- they always make it easy for us.

We also use the binding and a cutting facility to stitch the pages together by hand, which makes us feel even more connected to the work because we literally fold every single page and physically put it together. It brings us together as a team because lots of people get involved with that stage. 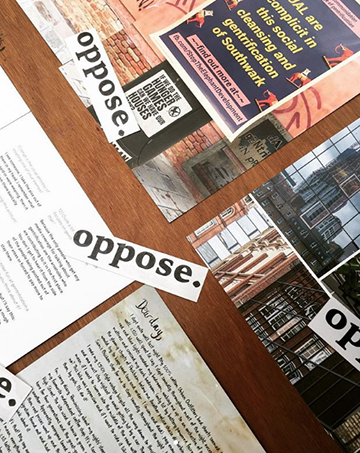 How has Oppose helped prepare you for the working world?

Oppose started as a class project to see how we would work together to create a magazine. Making our first issue relied on us communicating with each other as much as possible and assuming unofficial ‘roles’ so we had more structure.

Once it was out there and we saw the amazing reaction and selling potential Oppose had, it became more like a business where we manage finances, do our own marketing, work with contributors and set deadlines. It’s essentially managing a project, which is big part of working life and juggling responsibilities at work.

Also, we’re very well prepared for consuming vast amounts of coffee to get us through each issue, another necessity to working life!

What is next for Oppose?

Oppose two has just come out so we’ll be focusing on promoting it, going to zine fairs and book shops and generally talking to people and getting ourselves and our message out there.

We hope people like it, as much as they did issue one, we’re definitely proud of it and the amazing work from our contributors. The fact that people wanted to work with us and shared our passion and vision is amazing, and hopefully it will mean working with even more creative people in issue three.