London College of Communication students were shortlisted for ‘Student Magazine of the Year 2017’ at the Stack Awards, the world’s only awards scheme dedicated entirely to independent magazines.

Students from across the Media and Design schools were recognised for their contributions to Artefact and Terrible People magazines.

Artefact magazine is run by BA (Hons) Journalism students from LCC who produce, edit and manage content themselves. They get the chance to have their work published, as well as gaining first hand experience of what it’s like to work on a print publication. Every year a special issue is made and students from other courses can join the editorial team. Last year’s special issue, which focused on the topics of Truth and Terror, was nominated.

Terrible People was founded as a student collaborative project. Originally in issue 1, there were 6 students involved working together on every part from creating the idea and brainstorming, until producing and selling the magazine. The magazine evolved to be run by 4 MA Publishing students collaborating with 2 MA Design Management and Cultures students.

We got chatting to Defne, Lea and Tereza from Artefact and Yu-ting Huang from Terrible People about their nominations…

Hi guys, congratulations on being shortlisted! What is your magazine about – its ethos and purpose?

Defne: Artefact, to me, is about diverse storytelling. It is a platform created by journalism students at LCC so writers from all over the world are collaborating and telling stories that we feel matter.

Lea: We came up with the idea for the annual special issue of Artefact, which we called “Truth and Terror”, because we live in a time where we are faced with a global political turn towards closed politics. The magazine was produced in close collaboration between journalism, photojournalism, design and illustration students from across UAL.

How does it feel to be nominated?

Defne: I think this issue has really been something special, an international collection of stories that we think matter. As a young person especially, you write because you think you have something important to say to people. So, it’s a pretty great feeling, it makes me feel heard.

Tereza: It feels really awesome. Not only did we produce some great content we also decided to change the format of the magazine so to me the nomination is a great validation of our editorial and journalistic decisions.

What was your role and involvement in the magazine?

Defne: I was a writer and also pitched the theme of terror.

Tereza: Everybody did everything! We all pitched ideas for articles, edited other students‘ work, worked on the layout and prepared it for printing.

Lea: I was on the editorial board and also contributed to the magazine with an article called ‘Finding work for refugees – an Austrian start-up aims to tackle problems that politics can’t seem to resolve’.

Did #StephenPaddock, the #LasVegas mass murderer, have a “bad streak” in his blood or was it antidepressants that triggered his criminal instinct? Read 'I was born bad' on Artefact Magazine, available at @LCCLondon https://t.co/AB5dxpj45f #LasVegasShooting pic.twitter.com/S6qcM8WAAC

How do you feel your experience with Artefact has prepared you for future employment?

Defne: There is something sorcerous about newsrooms, working in that environment teaches you real-life experience that you cannot learn from a book. You are working as a professional, producing an entire magazine, being responsible for every little thing you can imagine. When looking for jobs you feel prepared because you have already been in that role.

Tereza: Apart from learning a great deal, working on the Artefact special issue gave me more confidence in my journalistic abilities.

Lea: Being part of the editorial board has opened my eyes to a different perspective of being a journalist, as I was suddenly in the position of being able to decide which topics would be tackled and which angles may be of interest to the readers.

What has been the highlight in your time working on the magazine?

Defne: The day when everything goes to print! I guess creating something from scratch, having the chance to distribute ideas, information and inspire others.

Tereza: Getting my hands on the final product was definitely a highlight for me. Seeing all your hard work transform into something real and tangible is the best feeling ever!

Defne: Have a lot of fun producing the next issues of Artefact this year.

Tereza: First I want to finish my Final Major Project, which has been in the works for a few months now, and then I hope to get a job at one of the cool lifestyle magazines I have my eye on.

Lea: After finishing my degree, I am hoping to successfully launch my own women’s linen wear brand called ‘Arkitaip’. By creating aesthetically pleasing sustainable and ethically produced garments, I hope to  convince people to consume more consciously and create a platform that raises awareness for the detrimental effects of the garment industry on the environment. At the same time, I wish to continue my journalism career by freelancing and writing about socio-political topics. 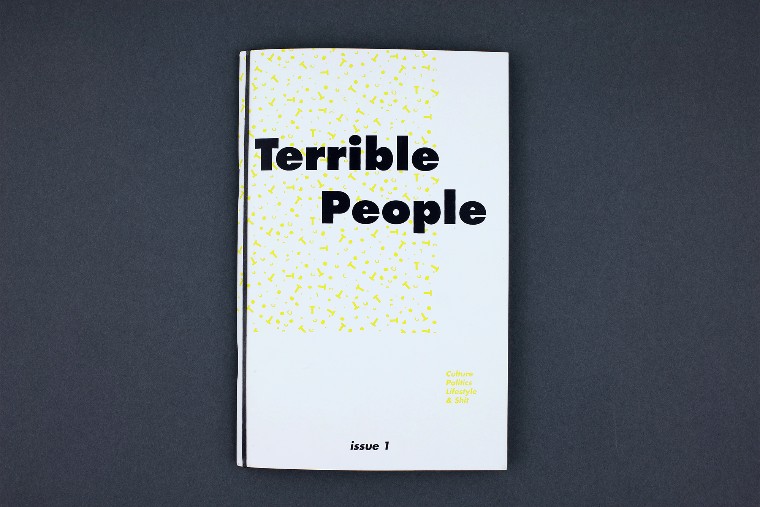 Well done on the nomination! What is your magazine about – its ethos and purpose?

Yu-Ting: Terrible People is a culture and lifestyle magazine exploring the dark sides of human nature through essays, interviews, illustrations and photography. We hope that we are able to give some insights into why people act the way they do.

How does it feel to be nominated?

Yu-Ting: Terribly good – we are really excited and honoured!

How do you feel your experience with Terrible People has prepared you for future employment?

Yu-Ting: It had a pretty positive impact for all of us. It’s encouraging to work hard on something you believe in and finding an audience that shares similar thoughts with you. Apart from that, we also practiced skills such as production, marketing and distribution.

Yu-Ting: For the project, as mentioned before, we carried on doing a second issue on our own, as we really want to continue the magazine as long as possible. Therefore, we created a project on Kickstarter to raise some money for the production costs. So, if you like Terrible People, please support us!

At the moment we’re trying to find good jobs, pursue our careers and keep Terrible People as an enjoyable side project during our free time.

What has been the highlight in your time working on the magazine?

Being shortlisted for a Stack Award!

Come along to one of our upcoming events to see more student-produced work.