Mike Bithell, indie games designer and creator of Thomas Was Alone, visited London College of Communication recently to give a talk to the BA (Hons) Games Design course on his experiences in the games design industry.

David King, Lecturer in Games Design, reports on the event.

We were grateful to have Mike talk for 45 minutes, covering a range of topics that provided information, hints and tips for students across all years of the course. 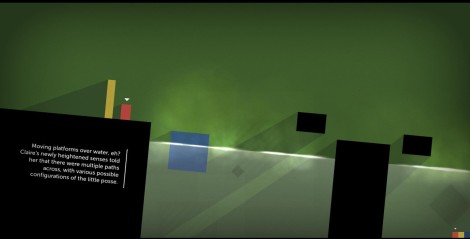 Mike started by speaking about the myth of the ‘spontaneous hit’ in indie games. We should note that the media is less likely to talk about all the unsuccessful games that came beforehand, as it makes for a less interesting narrative.

From here he explained that failure is part of the process, and not in the sense of ‘fail fast’ as a design methodology. As a designer you will make bad games, but that is acceptable. Each game you make has a better chance of being a good game. 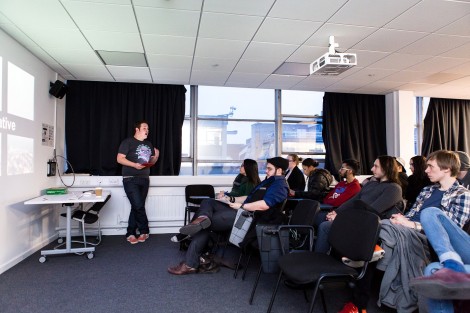 Students had a chance to ask questions about careers in games design. Image © Lewis Bush

Additionally, he suggested that the media and other people talking about your game will most likely help you in the long run. Give them the explicit freedom to put videos online and use images, so there is no confusion on the matter.

One final thing to take into consideration from the presentation is that everyone has a motive, so take that into account when dealing with people. Mike even admitted this of himself, as giving this talk would potentially increase the sales of his upcoming game Volume.

Mike ended the session by answering questions from the audience about current trends in the gaming market, and making your way in the games design industry. “Good to have someone who came from a game design course and has gone on to have a career making games” – Andy Dennison, student.