BAFTA Ones To Watch Award nomination for four LCC students

We chatted to Edward Burton, now in his final year of BA (Hons) Games Design, and Steven Sparkes, BA (Hons) Sound Arts and Design student, to find out a little more.

Tell us how you bagged yourselves a BAFTA nomination…
EB: “ProtoPlay is a huge international gaming festival based in Dundee, a subsection of which is called Dare To Be Digital. I actually found out about it on Twitter, having only ever really taken part in small London-based gaming events before, like Video Brains.

“One of the main reasons we entered the festival was because there were some really amazing opportunities and awards at stake. We knew that judges would pick three teams from Dare to be Digital to become the sole nominees of the BAFTA Ones To Watch Award. There was also a Design In Action Award and a Channel 4 Awards, both of which involved considerable funding.”

“It all started with a group of us talking about applying to be part of the ProtoPlay festival. We had already been working on a game as part of our end-of-year assessment, but at that stage all we really had was an idea on a page. I think we all thought ‘what’s the worst that can happen?’ and so applied with a pitch video that a friend helped us make.

EB: “As with a lot of these things we still hadn’t heard back two months later and so thought nothing more of it, presuming we hadn’t been successful. However, right in the middle of the LCC Summer Shows we received an email from Dare To Be Digital saying that not only did they love the game, but they loved it so much that we had bypassed the interview stage and had been chosen to exhibit – which is practically unheard of!

“Considering that other exhibitors were professional gaming studios, and we were just four students, this was an enormous compliment. It was also really daunting. We had limited technical resources over the summer, and whilst the game had come a long way in the two months since our initial application, there was still a lot of work to do!

“The BAFTA nomination, whilst a very distant dream, was the award that we were most excited about. We went to the award ceremony after a long day on our stand at the festival and, of course, the BAFTA awards were the last category to be announced, so the whole experience was very nerve-wracking. However, to our amazement, our game was awarded a BAFTA nomination!” 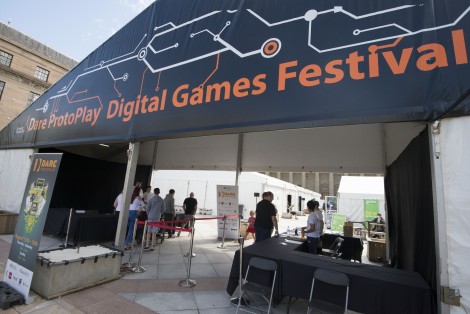 What were your roles in developing the game?
SS: “I worked as the Sound Designer on our game, The Wall Shall Stand. The others made sure that I was involved from the beginning, which allowed me to experiment with sound implementation very early on.

“It was fantastic being able to work on the sound and music assets for the game from the start, even if they didn’t have a home yet.”

EB: “We had been given a fairly open brief, with only two criteria set: to make a game that goes from A to B and that is set in the 1900s.

“Our initial ideas morphed and evolved quickly. Firstly we wanted to create a point-and-click, noir-style, detective game. This quickly developed a scenario and became about a mother who was searching for her lost child. Eventually, however, we moved away from this narrative and started to think more generally about the message of the game.

“The game is loosely based on the idea of starting a revolution in an abstracted 1960s city.

“To begin with we wanted the game to be set in Berlin, but we decided to take away any features that pin the landscape to a specific place or time. We really wanted to avoid offending anyone by referencing an exact period or location, and this way the game has a more universal feel.

“Aesthetically we were inspired by poster graphics, so sharp lines and bright colours were always going to be part of our designing process.” What were some of the challenges?
SS: “As development went on, it became apparent that our team was imbalanced in terms of our holistic skill set, so I decided to learn to code in C# for the development program, Unity. It was free to download and is great software for getting your hands dirty and designing sound for video games.

“I also learned to use FMOD software which allows you to make your music and sound files dynamically, by applying loop sections and parameter controls.

“I had to design the sound to seamlessly change from one section of music to another when the player moved around different parts of the in-game city. For example, entering the factory area transitioned the music from the residential theme.

“This flexibility that FMOD provided breathed new life into the music I’d created. It allowed me to design the music to adapt better to the environment that the player experiences, and produce flowing cinematic-style scores that responded to the player’s interactions with the game.”

EB: “It was a challenge to get the game to a standard that we were happy with before we had to move everything to Scotland, but we managed it. Having spent so much time focused solidly on the development of the game we travelled to the festival with very little idea of what to actually expect.

“There were a few surprises, for example we didn’t realise that the Dare To Be Digital show was actually aimed at children, so we had real concerns that our game about revolution wouldn’t be a hit. However, because it was very minimalist, the game seemed to be engaging for children anyway.

“Another nerve-wracking moment was when a judge for the competition visited our stand and asked ‘what’s your highest score?’ In our game there is no high score. The game is about an immersive experience. Theoretically you can spend all your time with the game just exploring.

“It’s not a violent game – all the protagonist can actually do is explore, or put up posters and pull down statues. I guess the only way you could count, or score, your experience is by how many monuments you pull down. The police in the game will knock you over and take away your posters – this is the antagonistic part of the game that you need – but that’s as violent as it gets.

“Obviously the more we got wrapped up in the festival the more nervous we became about how the game would be received by other judges. But in the end we always knew that were we to get through, it would be on creativity rather than marketability.

“Elements of our game are actually really sophisticated too. Cameron Richards built that whole AI (artificial intelligence) behind the game, which is really impressive – the city is full of individual characters who are programmed to carry out an enormous series of actions and you can just follow them.” 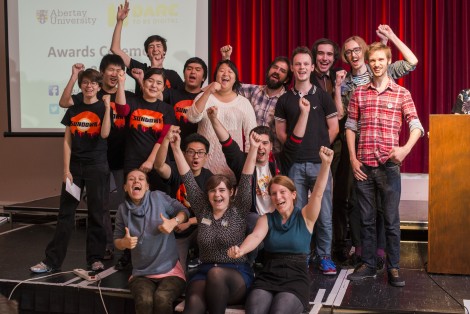 Dare to Be Digital BAFTA Ones to Watch winners, 2015.

What have you learned from this experience?
EB: “The whole experience has been really overwhelming, but a great end to a challenging few months. Now we just need to get on with our third-year studies whilst we wait for the BAFTA Games Awards!”

SS: It’s also taught us to just go for as many different opportunities as you can! As a BA (Hons) Sound Arts and Design student, I’ve also learned the importance of networking and meeting as many people from different courses as possible.

Find out more about BA (Hons) Sound Arts and Design